Why are Wall Street analysts so irked over Apple’s reporting changes? 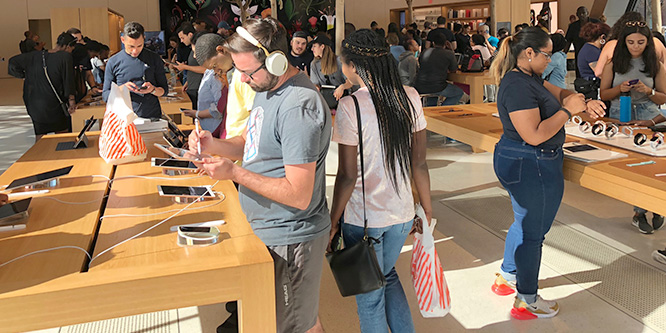 Wall Street analysts have complained over the years when retailers have decided to stop disclosing monthly same-store sales. Now, Apple is getting an earful after it announced it would stop breaking out unit sales and ASPs (average selling prices) for iPhones as well as for Macs and other product lines.

Some felt the move would stoke investor resentment that Apple was looking to hide signs of slowing sales of iPhones.

In a note written after Apple’s Nov. 1 fourth quarter conference call, Daniel Ives of Wedbush Securities wrote, “The Street will find this a tough pill to swallow this morning as the transparency of the Cupertino story takes a major dent given that tracking iPhone units has become habitual to any investor that has closely followed the Apple story for the last decade or more and is critical to the thesis.”

In another note, Citi analyst Jim Suva wrote that the move “left investors speechless” and that “some investors will view this as a negative that the company is trying to hide information that in the past was so important to assess the company’s strength.”

On the call, Apple’s management stressed that they believed unit sales had become less important than total dollar revenue over the years and that the company’s other lines of business were increasingly important. The move underscores Apple’s desire to become more of a services business with officials indicating it would disclose services gross margin for the first time ever.

“I was shocked, but it makes sense,” Gene Munster, an analyst at Loup Ventures, told Bloomberg. “Apple wants investors to focus less on iPhone units, and more on the overall Apple business. It’s going to take a few quarters for Apple to win investor confidence in this new way of analyzing the Apple story.”

Apple stock fell 6.6 percent last Friday, the first day of trading after the news. The quarterly report beat on earnings and revenues, but Apple also provided light guidance for the holiday quarter.

Many publicly held companies withhold providing certain information to the investment community for competitive reasons, but the degree of transparency varies significantly by company.

DISCUSSION QUESTIONS: What do you think drove Apple’s decision to stop disclosing unit sales and pricing on iPhones and other devices? Was it the right move?

Please practice The RetailWire Golden Rule when submitting your comments.
Braintrust
"Not such a mystery. Companies report earnings in the way that casts the most favorable light."

9 Comments on "Why are Wall Street analysts so irked over Apple’s reporting changes?"

iPhone sales volumes growth is slowing — mainly because the replacement cycle is lengthening as prices increase and upgrades have become more incremental than revolutionary. Apple would probably rather that data not be too public.

It is also the case that Apple is growing other revenue streams and does not want so much focus on the iPhone, important though it is.

If the Street of Dreams wasn’t so short-termist and reactionary then companies would likely disclose more information.

Apple’s move is no surprise and due to lack of innovation. If Apple does not find a great new innovation, they will be a premium brand but will not be more than one anymore. To be fair, I believe Samsung does disclose their phone split-up.

That the change does help Apple move the focus from its iPhone unit sales to its overall revenue is true. However, it also allows the company to disguise the impact that the ever increasing retail of its phones has on any decline in unit sales or unit sales growth.

In my opinion the reason Apple had previously focused on iPhone unit sales as a key metric was that they had historically risen year after year and indicated their phones’ dominance in the smartphone market. With other brands building better and better products the public’s perceived distance with iPhones and other brands has declined at the same time the replacement rate of phones has slowed.

Not such a mystery. Companies report earnings in the way that casts the most favorable light. When iPhone sales are through the roof, it was a great horn to toot. At $1,000 a phone it’s harder to move units, so you speak in terms of dollars. As to whether or not it was the right move or not, time will tell. Analysts are not known for their powers of forgiveness.

It is never about what you are looking at it is about what you don’t see. So let’s not look at slowing sales on aging product categories when we need to see the price increases that might be driving sales on new product down. Tablet and smartphone and watch technologies are stagnating most likely because tooling costs are narrow in expandability and not yet recovered. There are even rumors that the market has alternate solutions that are more powerful with greater consumer price acceptance. The king of technological innovations is gone forever and Cook seems to have little or no recipe for a successful future. Is it any wonder that the market is questioning at best?

While there is no mystery here, in that large retailers and brands try to present themselves in the most favorable light, it should give investors and consumers pause. When companies aren’t transparent about their financials, what else aren’t they transparent about?

Apple is a mature business and in the last year raised prices substantially on its core product, from the category it generates 60 percent+ of revenue. Folks are upgrading less frequently, but when they do Apple is earning more gross margin. Therefore the pivot from units makes sense.

Apple management doesn’t exist to serve analysts; nor, really, do the latter exist to serve the former. Instead both exist to serve a third group: shareholders (and investors…i.e. would-be shareholders)
Supposedly management felt too much coverage was be given to misleading indicators — unit volume over revenue, etc. — and that may well be true; or it may not, and management is simply trying to obscure decline. But it’s a public company and plenty of info is still available to judge performance. So analysts will just have to do their jobs and “analyze” as opposed to — say — simply regurgitating press releases.

Unfortunately, the industry of stock analysis and investor guidance requires stories like this, especially for one of the highest valued companies on the planet. It’s sensationalism of a minor issue. Well-run, publicly traded companies continuously work to portray their financials in the best way possible to ensure ongoing institutional investor interest. It’s neither inherently good or bad, it just is.

There is good logic to move from unit-based reporting for a mature and expensive product category to a more holistic view of revenues and profits. Are they hiding potential unit declines? Maybe. But this data is not required to provide reasonable guidance for individual or institutional stock investors. Move on.

Braintrust
"Not such a mystery. Companies report earnings in the way that casts the most favorable light."