Why is Amazon trying to convince CPG giants to go consumer direct? 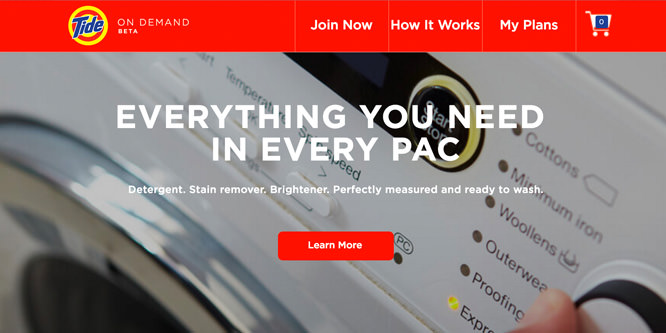 Large consumer packaged goods (CPG) manufacturers have been tinkering around with consumer direct sales channels for years. Procter & Gamble has sought to improve its understanding of consumer needs and drive sales through online stores, pop-ups and subscription programs such as the Tide Wash Club. Last summer, Unilever went headlong into consumer direct with its $1 billion acquisition of Dollar Shave Club.

What’s clear is that every dollar consumers spend with manufacturers is a dollar that doesn’t go to retailers. So, why is Amazon.com, a reseller of these very same CPG brands, trying to convince manufacturers they should sell directly to consumers?

According to a Bloomberg report, Amazon has invited large CPG companies to a three-day meeting in Seattle in May. The event will feature a presentation by Jeff Wilke, Amazon’s worldwide consumer chief, that will focus on the changing nature of the consumer brands market.

An invitation to the event obtained by Bloomberg reads: “Times are changing. Amazon strongly believes that supply chains designed to serve the direct-to-consumer business have the power to bring improved customer experiences and global efficiency. To achieve this requires a major shift in thinking.”

What’s not clear is where Amazon will position itself vis-a-vis CPG vendors, considering it is also a retailer that sells national brand products. Does Amazon see itself as a fulfillment vendor or in some other role(s)? Whatever its position, it seems likely Amazon is looking to drive a wedge between the brands and retail competitors, Walmart included.

Please practice The RetailWire Golden Rule when submitting your comments.
Braintrust
"Perhaps this is an attempt to turn CPG manufacturers into marketplace vendors on their Fulfillment by Amazon platform."

"The coming shake-out of category shopping dynamics will reveal which products will still sell to consumers using physical locations."

16 Comments on "Why is Amazon trying to convince CPG giants to go consumer direct?"

Amazon is giving CPG manufacturers a heads up and they should listen. They ignore this at their own peril. The challenge is, how do vendors implement this in an aggressive way without causing a huge rift with their long-term retail customers? Is this not the primary reason Walmart purchased Jet?

This seems like what is playing out in our politics. Constituents from both sides of aisle should put their country before their party for the good of the American people. I’m guessing that if Amazon, retailers and manufacturers put the shopper/consumer first, the rest will work itself out. Plus, as another discussion on RetailWire today points out, shoppers need our industry to get its act together on omnichannel and this is part of it.

My guess is that Amazon doesn’t really want manufacturers to go direct, but to shift focus from brick-and-mortar retail to online retail. “Direct” to Amazon likely still has Amazon acting as the hub of demand generation, fulfillment and the conduit to the consumer.

Amazon is many things. They have become a supply chain and logistics powerhouse. A retail disruptor and innovator. Their marketplace retail operations represent at least half of their retail sales. Perhaps this is an attempt to turn CPG manufacturers into marketplace vendors on their Fulfillment by Amazon platform. This would mean brands like P&G and Unilever could sell direct to consumers without intermediary physical retailers, without standing up their own e-commerce platform and without building out their own logistics for delivery to consumers. Amazon would handle the entire purchase process from the buy button to delivery via their own logistics. I’m sure Amazon can make a case to CPG brands that they would be giving them a direct customer/brand relationship rather than leaving the relationship to retailer brands like Walmart.

Whether or not CPG brands see this as growth potential for their business remains to be seen, but one has to wonder if the logistics of delivering product direct-to-consumer has been the primary challenge holding them back.

I think it’s mostly a Marketplace play. If CPG brand manufacturers are selling direct rather than building their own websites, Amazon probably believes they’ll sell through them. Marketplace is the most profitable part of Amazon’s retail operations, so it would be a great win for them. They could also return to a hosting model, where they host the e-commerce sites for them. That drives business to their other very profitable business, AWS.

One probable reason is that the CPG brands have large advertising and marketing budgets and Amazon is a very effective media option for that spending when the ads are matched to consumer search on the website. With the CPGs finding it increasingly difficult to get results from advertising because of media fragmentation and the rise of private label brands by grocers, Amazon offers an attractive channel for the brands.

I believe this is another move by Amazon to reduce the effectiveness of brick-and-mortar retail. Fulfillment is already much more efficient for manufacturers on some lower-volume and specialty products than the current DC/LTL system. Consumers are already moving to alternate ways of getting staples or specialty items than the traditional shopping trip. CPG manufacturers and retailers need less friction and more cooperation to insure all can move products effectively and efficiently.

Direct-to-consumer marketing is the future for many, but not all, CPG categories. We will see a dramatic separation between the way produce and paper goods are shopped.

In the past, the shopping dynamic was set — for virtually every category of consumer goods. A shopper went to a store. The store might sell furniture or fruit or fashion, and the process was the same or very similar. Now, higher-involvement categories remain shopper destinations, while lower-involvement replenishment goods are becoming less worthy of a physical visit. The coming shake-out of category shopping dynamics will reveal which products will still sell to consumers using physical locations.

At the end of the day, Amazon is the world’s most successful fulfillment or logistics company. It matters not to Amazon whether it features and sells on its website or fulfills other manufacturers’ product sales.

For manufacturers, the Amazon offer of fulfillment is another channel option that achieves a couple of things: 1.) It provides manufacturers with an immediate access to their customers without waiting for retailers to develop their omnichannel presence. 2.) It solves the final-mile delivery challenge for manufacturers.

This represents a real opportunity for manufacturers and a real threat to traditional retailers.

The internet has proven again and again to be exceedingly successful at removing friction. Evan Williams, a co-founder of Twitter, said it best: “Here’s the formula if you want to build a billion-dollar Internet company,” Williams says. “Take a human desire, preferably one that has been around for a really long time … identify that desire and use modern technology to take out steps.”

What about the last mile? Produce. Deli. Immediate need. Amazon is mopping that up too with their prolific experimentation with Amazon Go, Amazon Fresh Pickup and so on.

In the multi-year battle between the Amazon retail and Marketplace teams, I am a firm believer that Amazon has determined Marketplace the winner and will increasingly push brands into it. This push confirms it.

Amazon makes all their money off of AWS. Why wouldn’t they want more customers? And that’s my 2 cents.

As we all know, almost 3/4 of all US consumers go to AMZN first when shopping or even searching for product on line. So guess what? Hard to imagine going to one site for toothpaste, another for paper towels, another for a t-shirt and still another for a can of soup. If I’m already on AMZN, why not just do it all in one place? Oh, I get it now.

I think this one is in the numbers. Amazon web services represents 44% of sales (same as sales from general merch), but the web services EBITDA is 35.9% vs 8.9% for general merch. The more companies that use their web services, the more profitable this company becomes. Infrastructure as a service represents a $9B market and is growing at 35%-40% annually. Amazon web services currently holds a 37% share and is growing at 60% annually. Pushing people to do something that will drive sales of your most profitable business, is just good business.

There should be little doubt that Amazon will convince a few small fries and maybe even a nitwit or two that the key to their owning independence and the destiny reserved for those willing to think outside the box is in an all out e-commerce war for freedom. This would not only give Amazon an edge in trade through lower prices but also the underlying motive of acquiring low-cost distribution stores for the sagging grocery delivery/pickup effort that is only draining assets. Amazon is seemingly desperate to break into the grocery business. There is a lot of money in food and the turns are very quick. The problem is that the Amazon distribution centers are in low-cost remote areas with low populations. Not unlike Walmart or any other big box for that matter. But the big box gang does have something that Amazon does not, thousands and thousand of stores. And these stores are smack dab in the middle of an ocean of paying customers. These stores make things like BOPIS and same-day delivery far… Read more »
0
|
0
-   Share

What is behind the pitch to CPGs? Three obvious things come to mind. 1) Amazon wants to dominate all online retail and this is a big category that they currently lack. They are willing to lose money in short term to gain more. 2) They still have plans for bigger push into private level. The more CPGs on the platform, the more insights they get into the customer to choose which category is next. 3) Amazon knows that these brands’ customers are shopping on Amazon already and will play on the fears of CPGs who think that other brands will take volume from them if they miss out on the Amazon shopper. Almost every brand we talk to sees direct to consumer as key to their future. We argue that is they give that relationship to the customer over to Amazon instead of manage it themselves — they will lose in the long term. If part of Amazon’s pitch is that they will share the customer data with the brands that join them, then I… Read more »
0
|
0
-   Share

Braintrust
"Perhaps this is an attempt to turn CPG manufacturers into marketplace vendors on their Fulfillment by Amazon platform."

"The coming shake-out of category shopping dynamics will reveal which products will still sell to consumers using physical locations."