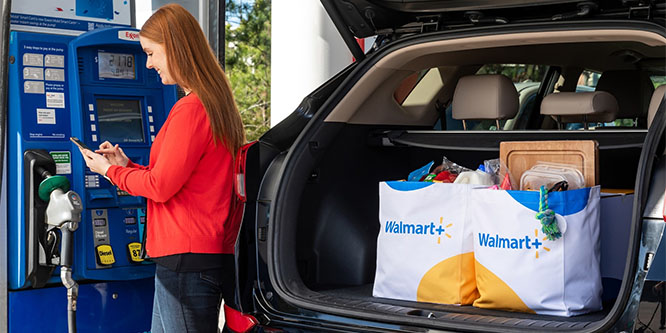 The high cost of filling up the pump may work in Walmart’s favor as it continues on its campaign to increase its Walmart+ subscriber numbers.

The retailer this week said it was increasing the fuel savings that members receive when they fill up at participating gas stations across the country. Walmart+ members will now get up to 10 cents off per gallon. They’ll also have substantially more places to fill up with more than 14,000 gas stations now part of Walmart’s fuel network including those operating under the Exxon and Mobil banners.

The retailer is offering five to 10 cents off per gallon at its own gas stations and those operated by Murphy Oil. Members also receive discounts when they get fuel at more than 500 Sam’s Clubs.

“Ninety-one percent of our customers are aware of the increased prices at the pump and nearly half of those told us they are changing behaviors because of them,” Chris Cracchiolo, senior vice president & general manager of Walmart+, said in a statement. “More access to a bigger discount will make a difference for our customers. We want Walmart+ to help our customers save time and money, not only when they’re shopping with us, but throughout their day.”

The addition of Exxon and Mobil is a big deal because it adds thousands of stations across the country where Walmart+ members can stop.

The retailer has been on a campaign to attract new members to Walmart+ while giving current subscribers more reasons to stick with the program. Company executives have repeatedly emphasized the value of Walmart+ members who shop more frequently and spend more with the chain than non-members.

Walmart last month added all of its 1.6 million full- and part-time employees working in stores, distribution and fulfillment centers to the delivery subscription plan for free.

Mr. Cracchiolo said last month that adding employees to Walmart+’s numbers would serve as a thank you to associates for their service and provide the retailer with added insights to how well the program is working for its members.

Walmart has not publicly disclosed its membership count, but outside party estimates have put the number between 11.5 million (Consumer Intelligence Research Partners) and 32 million (Deutsche Bank).

DISCUSSION QUESTIONS: Do you think Walmart is effectively making the value case to attract large numbers of new members to its Walmart+ plan? Will the expanded fuel perks for Walmart+ members prove more beneficial in retaining existing subscribers or attracting new ones?

Please practice The RetailWire Golden Rule when submitting your comments.
Braintrust
"Fuel has been an effective billboard for Walmart’s value proposition and is a logical vehicle (see what I did there?) for promoting the benefits of Walmart+. "

"Perhaps Walmart has been paying attention to the seriously long lines at Costco gas stations (always, but even more so lately), to pull in extra shopper trips."

"They’ll see a gradual increase over the next several months, but the smartest move was when they added their employees to the + program for free."

All consumers who drive need gas, and so this offer will have broad appeal – and it’s something Amazon Prime doesn’t offer. With this latest offer, Walmart is not only leveraging something that is relatively unique to them (i.e. not all retailers offer gas), but something that has broad appeal at a time when inflation is at historic rates. Smart move. And adding all their employees to the program is a clever way to pump up subscription numbers.

Right on Mark! I can hear the entire staff talking with customers about this. Great move.

This is a helpful additional benefit targeted at an area where people are really feeling price pressures. And given the lines at Costco pumps – where gas is much cheaper than average for members – we know that the benefit is appreciated and used. Whether it attracts more members to Walmart+ remains to be seen. The program is still relatively one-dimensional in terms of benefits compared to Amazon Prime, and a lot of households are looking to cut subscription services right now rather than add new ones.

Fuel has been an effective billboard for Walmart’s value proposition and is a logical vehicle (see what I did there?) for promoting the benefits of Walmart+. Some Walmart shoppers will drive miles out of their way to save a few cents on gas. With the expanded fuel partnerships, now they won’t have to.

This is a math problem. I save 10 cents a gallon and my car holds 20 gallons. That’s a two dollar savings per fill-up. I fill up once a week and at the end of the year my membership is paid for. Plus (no pun intended — Walmart+) I get the benefits and perks of the membership. This makes for an easy decision for a consumer.

Given the high price for fuel with no downside in sight for quite some time, this is a good move by Walmart. It will definitely attract new members but I don’t think the numbers will spike precipitously. They’ll see a gradual increase over the next several months, but the smartest move was when they added their employees to the + program for free. This is a terrific investment in employees and Walmart will be able to glean tremendous insights on many aspects of existing programs.

This is a great strategy for Walmart and will help their customer in their everyday life.

This is not only a great perk for their subscribers, but it’s added value that will translate into loyalty for the retailer. If you are not looking to join Costco, Walmart is a great alternative and will definitely attract new customers.

And we need to give Costco a run for their money at the pumps!

Perhaps Walmart has been paying attention to the seriously long lines at Costco gas stations (always, but even more so lately), to pull in extra shopper trips. Not to mention, two of their largest competitors — Amazon (Whole Foods) and Target have no/few gas stations. Walmart competes best on EDLP inside the store — this is their ethos. As a result they command a unique market position, not requiring a ‘loyalty program’ nor phone number for shoppers in store like Albertsons, Whole Foods, Costco, and most other Grocery and C-Store chains in order to simply pay the shelf price on items. And virtually all grocers and c-store chains offer a similar discount on gasoline, have been for decades, this is nothing new (and you don’t have to pay to join their loyalty programs). Seems to me Walmart could be pursuing this for only one reason — to bolster a loyalty program to actually start collecting customer specific DATA to better understand individual customer shopping behaviors. Similar to their Vudu acquisition for streaming movies that fell… Read more »
0
|
0
-   Share

This is an awesome benefit at a time when the cost of fuel is on people’s minds — hence it is great timing and is likely to attract membership. Also at a time when consumer price inflation means that families will be looking at every outgoing, then this could well be a reason to keep the Walmart+ subscription over a comparable monthly outlay — Netflix for example?

Braintrust
"Fuel has been an effective billboard for Walmart’s value proposition and is a logical vehicle (see what I did there?) for promoting the benefits of Walmart+. "

"Perhaps Walmart has been paying attention to the seriously long lines at Costco gas stations (always, but even more so lately), to pull in extra shopper trips."

"They’ll see a gradual increase over the next several months, but the smartest move was when they added their employees to the + program for free."