Will a new lunch menu make Starbucks a food giant? 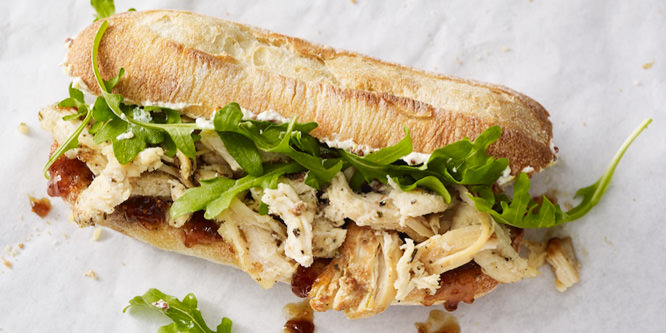 Long lines queue up most mornings at Starbucks across the country as people look to get their caffeine boost and perhaps a breakfast sandwich or pastry to go with it. The same cannot be said of the chain’s locations during lunch hour. Now, Starbucks is looking to change that with a new, expanded menu it has been testing at around 300 stores in the Chicago and Seattle markets.

The new menu, known as Mercato (market, in Italian), includes 18 dishes ranging from an Almond Butter, Strawberries & Jam Sandwich to Za’atar Chicken & Lemon Tahini Salad. The all natural options include both hot and cold dishes made daily and priced between $4.75 and $9.45 in the chain’s Seattle stores. Starbucks, in partnership with Feeding America, donates all unsold items to the community every night.

With half of Starbucks customers entering its locations before 11:00 a.m., a successful rollout of Mercarto could have a significant effect on the chain’s top and bottom line performance. The USA Today article pointed to a lack of a kitchen on premises as one factor that may limit the chain’s ability to attract lunchtime shoppers, although that does not seem to have adversely affected Starbucks’ morning traffic.

The coffee chain has increased its emphasis on food in recent years with both successes and failures.

In 2012, Starbucks acquired La Boulange, a San Francisco Bay-area pastry chain, with the goal of taking it nationwide. By mid-2015, Starbucks announced it would close all 23 La Boulange locations while keeping the company as its primary food provider. Starbucks has posted double-digit year-over-year growth in food sales off of a low base and food now accounts for about 20 percent of the company’s total.

Last year, Starbucks invested in Princi, an Italian bakery with locations in Milan and London. At the time, Starbucks said Princi would become the exclusive food provider in its new Roastery locations in New York (open 2018) and Shanghai with plans to integrate its offerings into all Reserve-only stores this year.

DISCUSSION QUESTIONS: Is Starbucks finally on the right track with its Mercarto lunch menu? What do you see as the opportunities and challenges facing Starbucks when it comes to food?

Please practice The RetailWire Golden Rule when submitting your comments.
Braintrust
"For Starbucks, it’s not a matter of if they’ll be successful with food; it’s a matter of when."

"Without full kitchens, they are in danger of diluting the brand and what they are good at..."

"It would require some pretty significant marketing to get people to accept Starbucks as a lunch destination beyond a last-minute meal in a pinch."

15 Comments on "Will a new lunch menu make Starbucks a food giant?"

This is a significant opportunity for Starbucks, especially in city locations where players like Pret are having enormous success with the lunchtime crowd.

The previous barrier to Starbucks doing well was range: there were hardly any lunchtime food options! This new menu seems to remedy that, but Starbucks will need to shift perceptions if it is to be successful.

One of the greatest things about Starbucks is they are not afraid to experiment. They also know when to call it quits on an idea that’s not working out. For Starbucks, it’s not a matter of if they’ll be successful with food; it’s a matter of when. I think they are certainly on to something with their lunch menu. Whether it’s successful or not will likely come down to pricing and marketing.

Starbucks is smart to keep experimenting with food offerings. With 50 percent of their business happening before lunch, it makes sense to try to bring in more customers for food throughout the day. Starbucks management is willing to keep trying, and they have the deep pockets to make many attempts. They will get it right.

Without a kitchen, I just don’t see Starbucks as a go-to place for lunch but I do think they are on the right track to drive a bit more lunch traffic. People do meet for coffee at all hours and having the option to get a light lunch on the side would be a plus for the right crowd. For my 2 cents.

Adding more lunch options is a great idea, as long as the counter staff doesn’t have many items to heat. If most of the choices are cold and self-service, Starbucks should come out on top.

First, a disclaimer: I am a former Starbucks partner (internal speak for employee). That said, one of Starbucks’ biggest points of pride is their ability to customize any drink to meet each customer’s individual wants and needs. Unfortunately, because of how each store is set up (with not much more than a programmable oven), that same customization does not carry over to the food selections. Baristas are able to remove some ingredients (like removing cheese from a breakfast sandwich), but if you want turkey bacon on a croissant, or extra dressing with your salad, you’re out of luck. To me, being able to customize the food offerings in a similar way to the drinks is essential, and would feel more intentional to the customers. To do this, however, Starbucks would have to completely rethink its store designs, procedures and logistics — certainly no small feat, but something I’m sure folks are looking into on Utah Ave.

In the real world Starbucks is horrible at food service and it impacts customer experience. I have been in long lines where the customer is at the cashier ordering food and making 20 second silent decisions on food as if they are at McDonald’s or a greasy spoon and I just want a cup of coffee. Starbucks may want to make two separate lines, one for food ordering, if they want to pull this off efficiently.

Why not just stick to what you are really good at? If I want coffee and perhaps a snack, and the location is good, I’ll go to Starbucks. I can’t see this changing for most people if they offer lunch. Without full kitchens, they are in danger of diluting the brand and what they are good at with food that will probably not be as good as many other options for lunch around. They will open themselves up to a new area of competition and quite probably not be up to it.

I’ll be brief. Starbucks for me does a good job selling coffee, but lunches and food, without a kitchen to make what the customer wants … I will go to Panera instead, plus get a great cup of coffee there.

We advise clients in the c-store industry “own the morning, own the day.” However, to make that work you have to have a food offering for the other day parts. Customers are very willing to have bakery item for breakfast but not for lunch or dinner.

What Starbucks is doing is working to capture that second meal occasion. Their success will depend on two factors. The food itself and their ability to turn the tables fast enough during lunch. This will not be as easy having worked very hard to be the third place, which in many cases means that after breakfast customers come in and work rather than eat. The result is very slow table turns. Grapping breakfast to go is one thing buy many people prefer to sit and enjoy their lunch.

The sheer number and convenience of Starbucks stores, and the amount of people who come in, means this is a worthwhile experiment. People buying a morning coffee may well be enticed to pick up their lunch at the same time, so I think offering a decent range is going to go in Starbucks’s favour. As we all know thought the company is very good at pivoting, so if this isn’t a great success I’m sure we’ll see them move to another angle.

They’re getting better, but I don’t know if I buy it. It would require some pretty significant marketing to get people to accept Starbucks as a lunch destination beyond a last-minute meal in a pinch. They’ll have to convince people that it’s good food, too, since their previous offerings haven’t exactly been gourmet.

Adding a new line is tricky for any retailer, but Starbucks has the benefit of being incredibly widespread. Adding a second wind to the morning rush would greatly add to their bottom line, but they do have a fair amount of competition on the lunch front. Luckily, Starbucks is a well-loved brand that has no problem getting customers in the door. It will come down to marketing and the quality of their lunch offerings, but it’s very likely that this will be a success.

For Starbucks this represents a terrific potential opportunity to expand into this critical day part. Lunch is becoming an ever expanding meal battleground. With the rise of grocerants, convenience store meal service, removing the Donuts from Dunkin Donuts, etc. the battle for this share of stomach becomes more complicated and competitive. This is the fray in which Starbucks is stepping. Success is not guaranteed.

Braintrust
"For Starbucks, it’s not a matter of if they’ll be successful with food; it’s a matter of when."

"Without full kitchens, they are in danger of diluting the brand and what they are good at..."

"It would require some pretty significant marketing to get people to accept Starbucks as a lunch destination beyond a last-minute meal in a pinch."