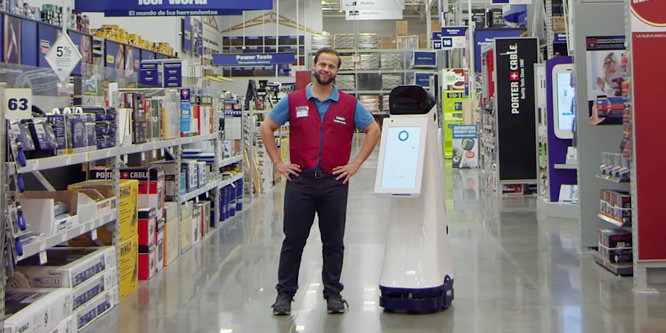 Lowe’s Home Improvement recently announced layoffs as a part of an effort to “overhaul its staffing model.” The cuts, which will constitute less than one percent of the total staff, come in the context of a reshuffling of responsibilities, which a source told the Charlotte Observer is meant to provide an increase in “face time with customers.”

Some of the additional changes include moving around responsibilities between roles and the elimination of the department manager title, a later Observer article reported. But Lowe’s is also eyeing expansion. Lowe’s plans to open 15 to 20 stores annually over the next three years, which the chain said will create 4,000 new store-level jobs.

And despite the cutbacks, Lowe’s continues to add staff as necessary to meet seasonal demands. A press release indicated that the store plans to hire more than 45,000 seasonal employees.

Given Lowe’s recent history of customer-facing technological innovations, the idea of increasing human-to-human face time may seem inconsistent. The chain, for instance, debuted a pilot of its in-store customer service robot, OSHBot, in 2014, intended to take care of many tasks generally managed by human staff.

In late 2016, the one-store OSHBot pilot expanded into the release of a branded “LoweBot.” Slated to be rolled out in 11 Lowe’s locations in the San Francisco Bay area over seven months, the LoweBot can, like its predecessor, find products, answer simple customer questions and help manage inventory.

The Lowe’s Innovation Labs website positions LoweBot as a way to free up staff so that the they can offer customers specialized knowledge and expertise. With that in mind, Lowe’s may be anticipating a future in which robots do the heavy lifting and real-live humans help customers with the higher-level tasks. It has not been announced if or when Lowe’s robotic helper will appear in stores beyond the San Francisco area.

While Lowe’s has experienced positive same-store sales for 14 quarters in a row, the retailer is still playing second fiddle to Home Depot in the home improvement world, according to CNBC. Lowe’s shares have dropped 2.5 percent in the past year while Home Depot’s have increased 5.9 percent.

DISCUSSION QUESTIONS: Are staffing changes key to Lowe’s future success? What steps should Lowe’s take to make sure store staff has more face time with customers? How prominently do you think robotics and automation will play into Lowe’s staffing model in the coming years?

Please practice The RetailWire Golden Rule when submitting your comments.
Braintrust
"Customer-facing improvements are the key to any retailer's success."

"Cutting staff remains the quickest method to increase profitability, provided the cuts are done wisely and do not diminish customer service. "

"The question isn’t robots or humans, it’s really between how humans and systems can work better together."

Customer-facing improvements are the key to any retailer’s success. Those who choose bricks over clicks are in a vulnerable position in a home improvement store to find what they need and often wonder if they got the best choice. And there are a bunch of people who don’t really know specifically what they need so a robot probably won’t be their first choice to interact. It would seem this article is about freeing up back office to be more on the sales floor which I would applaud. At 1 percent of the workforce, not sure how much that will help them beat Home Depot.

Staffing changes are not the key to Lowe’s future success. They need to continue to invest in technology but not robots and give the staff the technology to be able to answer questions, find products and check inventory. Anyone who knows me knows I am a big fan of giving each floor staffer a mobile device to help them be knowledgeable and engaging with the customer. If I have the information or can get it, why not help each customer? It’s not robots but people that make real customer service work — for Lowe’s or for any retailer!

The question isn’t robots or humans, it’s really between how humans and systems can work better together. Both at the customer level and at the store operations level. I think adjusting staffing to be augmented with robots is a really smart move; however, it needs to be part of a much broader strategy as there is no silver bullet.

All retailers must carefully consider staffing investments — the largest expense beyond inventory. Interaction between store associates and shoppers is a key driver for conversion, so any move that enables staff to spend more time interacting with shoppers is a smart move and should be reflected in higher conversion rates.

From my perspective, robots are still many years away for most retailers. However, there is no doubt that they will play an increasingly important role in retailing in the future. While human interaction will always be important, there are roles that robots/automation could play that could improve the shopping experience including facilitating faster check-out, product locating and way-finding in larger stores.

Investment in technologies that improve the productivity of places, processes and people are the foundation of retail business improvement. Screen media in particular, which engages, informs and influences patrons and expresses the partnership of customer/staff, supplier/retailer and co-shoppers among others is becoming the bonding force of forward momentum that omnichannel has promised. Physical robots are just a physical form factor for the importance of “bots” in voice or touch-screen activated assistance. Inventory visibility, fulfillment options, suggestive selling and other technology-enabled functions deliver the improvements that retailers and consumers see as elements of improvement.

In-store technologies should change the role of staff and trigger re-aligments. As the digital experience improves, staff are able to contribute with high value-added activities.

Cutting staff remains the quickest method to increase profitability, provided the cuts are done wisely and do not diminish customer service. Unfortunately, this is rarely the case. More often than not, pencil sharpening at headquarters also affects the level of service and negatively impacts sales. At Lowe’s (or any other DIY chain) having a knowledgeable person to help you make decisions and find the right solution is not just a luxury, but rather often the predicate for the sale. I also get a bit skeptical when I hear things like “eliminating department managers.” My retail experience tells me that “ownership” by a single, competent individual is key to keeping stock on the shelves and sales heading upwards. The adage “if everyone is in charge, no one is in charge” remains a stark reality for corporate folks who believe they have created a new, less expensive, less people-intensive way to do business in the stores. It’s interesting to watch retailers re-invent the same mistakes of the past and learn the hard way that savings on paper… Read more »
14
|
0
-   Share

I was in a Lowe’s store today and the place had many employees roaming the aisles. I needed help looking for 2 specific items and received excellent service from 2 employees. In my town, the Lowe’s service is much better than the Home Depot! Having robots available to answer simple questions like item location should prove to be a positive enhancement. Keep my Lowe’s experts in the paint, tool, appliance, etc. departments.

The layoffs have nothing to do with robots. Lowe’s has always been very top heavy. And in the corporate office it’s still a major opportunity. I was a department manager for years and worked in six different stores. Most of the locations I worked in, the role was an absolute joke. In the best locations, I was a leader in the store, but disenfranchised as I had to work with tenured peers that made $20-23 an hour that couldn’t even have an awkward performance discussion or know how to win an upset customer back. The position was grossly underutilized and in nearly 2000 stores, I’m sure there were hundreds of others that the situation was even worse. It was time for the company to level the playing field. As far as the technology piece, Lowe’s has a long way to go before getting robots. I have watched the company spend hundreds millions of dollars on technology in the past six years on selling platforms and mobile technology that is not without its opportunities. I think… Read more »
3
|
-2
-   Share

Two of the key contributors for creating “face time for customers” are, of course, customers and associates on the floor and in their departments. This is a struggle for a vast majority of large store retailers. Remodeling the stores to place the store manager’s office directly next to the break room with a glass wall separator might help along with access codes for the doors. If there is sufficient customer assistance on the floor and where it belongs, customers might come in and shop once in a while. I mean that if you can’t find help, you stand a good chance of not finding something to buy. I suspect that the big boxes might be of the opinion of why pay for something that doesn’t work. Hiring robots and adding talking displays/end caps does not and will not work. Automation like this and others such as business answering systems to nowhere are an insult to those that need fast direct responses. Automated information systems have greatly improved how the number of purchase transactions per minute,… Read more »
0
|
-1
-   Share

Braintrust
"Customer-facing improvements are the key to any retailer's success."

"Cutting staff remains the quickest method to increase profitability, provided the cuts are done wisely and do not diminish customer service. "

"The question isn’t robots or humans, it’s really between how humans and systems can work better together."