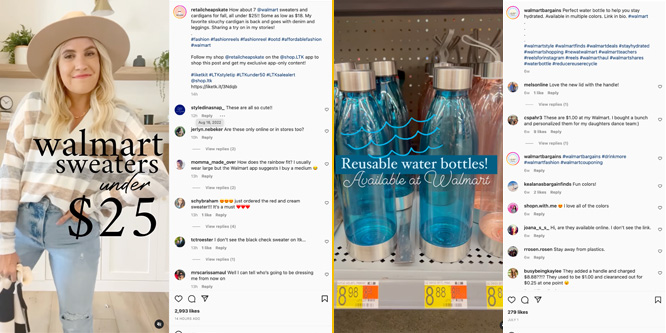 Walmart may have intentions to launch a platform to help the retailer and third-party sellers promote the sales of products on the walmart.com marketplace.

Walmart’s trademark applications do not necessarily assure that it will go ahead with the idea, but the logic behind the concept is not hard to understand. The retailer already makes use of influencers to promote products it sells and has focused on building its marketplace business in recent years.

Walmart has seen its marketplace seller numbers increase about 60 percent year-over-year, according to the chain’s CFO John David Rainey, who spoke earlier this week on the company’s second quarter earnings call.

The company has also found a profitable revenue stream through digital advertising.

Walmart CEO Doug McMillon, speaking on the earnings call, said, “The relationship between digital growth, marketplace growth [and] advertising is something that we’re trying to take advantage of. In the case of the U.S. business, the ability to attribute sales later on to in-store transactions makes us uniquely positioned.”

Mr. McMillon said that Walmart has made improvements to its search and first-party shopper data, bringing even more advertisers into the fold. Active advertisers, including third-party sellers on its marketplace, have increased by 121 percent year-over-year.

Walmart’s ability to measure the performance of advertising and social media influencer marketing is key to the company’s efforts.

A recent report by Publicis Sapient and analytics firm Launchmetrics based on a global survey of 1,000 marketing and PR professionals found that companies are focusing on business results when it comes to influencer marketing. Eighty percent use economic measures to gauge the efficacy of influencers versus 24 percent that prioritize reach and views.

Reuters reports that Walmart declined to comment on its social influencer platform plans.

DISCUSSION QUESTIONS: What role does influencer marketing play in promoting the sale of products and services for Walmart and its marketplace sellers? How would an influencer platform help Walmart continue to build on its marketplace initiatives?

Please practice The RetailWire Golden Rule when submitting your comments.
Braintrust
"The fact that Walmart is trying stuff like this is a really good sign: don’t let the times pass you by."

7 Comments on "If Walmart builds a social influencer platform, will marketplace sellers come?"

Building this kind of platform is sensible, not least because younger shoppers discover more product through TikTok than they do via Google and traditional search methods. Social is essentially the new search. The issue for Walmart will be in getting both creators and regular consumers to use this platform regularly. It has to be compelling and entertaining and not just an another sales channel. They also need to include interesting creators not just those with big followings.

Do the words “social media influencer” and “Walmart” seem like an oxymoron to you, too? I don’t know, this seems off-brand. But the fact that Walmart is trying stuff like this is a really good sign: don’t let the times pass you by. Fail fast (which is my prediction for this episode).

Absolutely, yes. Some people may have noticed that the Pennsylvania Senate race is being waged almost exclusively on social media, with amazing results. These platforms will become even more important as Zillennials enter the workforce and set up households. This is a smart move.

It will be interesting to see how this evolves. Ranking of influencer content is based on their number of followers. Ranking of creator content is based on how well individual pieces of content perform (go viral). TikTok favors the latter. Regardless, influencer/creator marketing is essential for driving B2C demand. But the space is changing so rapidly. Part of Walmart’s goal may be to get more control over how it works rather than relying on (or being subject to) the ever changing algorithms of the key content platforms like YouTube and TikTok. The question is, will they be able to drive enough content to make it successful?

This could be a tsunami of success. I believe Walmart has the talented staff to do this, or will quickly add them. Walmart Marketplace joins the race.

It’s crazy difficult and expensive for SMEs with small marketing staffs trying to promote nationally to get into the syndicated influencer networks – where it’s pay to play with no guarantee of even making a connection, much less getting a campaign started, much much less having a promise of success. Anything to facilitate the process and help small companies genuinely connect with social influencers is going to at least get tried.

The relationship between brands, creators, and shoppers is invaluable. Walmart’s initiative to own more of this market is going to drive positive results and most important sales revenue. Every marketing effort that adds a human touch to the customer’s shopping journey, influencer or not, is what moves shoppers to checkout.

As inflation drives more higher-income shoppers to Walmart, this could have the potential to engage customers outside of their typical ecosystem. The influencer platform will add to the LTV of shoppers and build a client base for marketplace sellers.

Braintrust
"The fact that Walmart is trying stuff like this is a really good sign: don’t let the times pass you by."