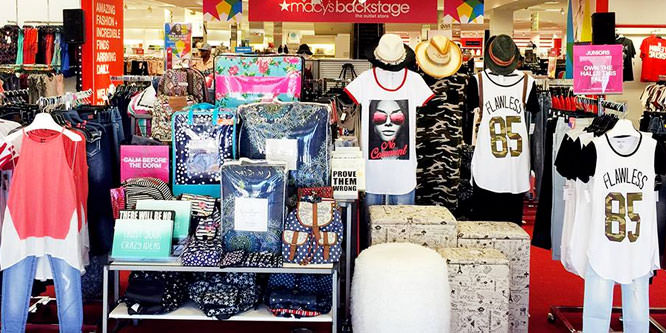 Jeff Gennette, Macy’s president, is big on store-within-a-store concepts. That’s been one of the storylines on Mr. Gennette since it was announced he would replace the company’s longtime CEO, Terry Lundgren, in the first quarter of next year. Now comes word that Macy’s is setting up shops promoting its off-price Backstage concept in 45 of the chain’s full-price stores in time for Christmas.

On an earnings call with analysts last week, CFO Karen Hoguet said stores adding the Backstage shops have seen improvements in productivity. Dedicated Backstage staff are in charge of merchandising the shops and buying is also done by a group separate from Macy’s. Brands sold in the shops are, in many cases, completely different than those found in the rest of the store.

Macy’s is also testing new categories, including “toys, home décor and queue products,” with the Backstage concept in 13 of the 45 new shops.

“In toys, we’ll have high-end scooters or Big Wheels. In home décor, things like decorative figurines, pet accessories, the kinds of things that we don’t sell in a typical Macy’s that we think the Backstage buyers are better equipped to buy, and we’ll see how it sells in the stores,” said Ms. Hoguet (via Seeking Alpha). “So we’re actually excited about these tests, and we’ll see.”

Macy’s is making this latest move at a time when the chain is struggling with declining customer traffic and revenues. Research suggests that Macy’s and other full-price stores are being hit hard by off-price alternatives.

Earlier this year, research from The NPD Group found that roughly two-thirds of people who go shopping for clothes head to off-price outlets. Purchases made by these consumers represent 75 percent of all the clothing purchased across retail. Shopping visits to off-price stores increased four percent year-over-year in April, with approximately half of all visits resulting in a purchase.

Please practice The RetailWire Golden Rule when submitting your comments.
Braintrust
"Macy’s has already made a significant investment in Backstage and if the concept proves to be successful, there’s no doubt we will see more."

The addition of Backstage won’t hurt Macy’s, but it’s hard to say if it will help. As noted in the article, these are “tests” and I commend Macy’s executives for experimenting. However, like any test, it’s critical to measure results. Macy’s should measure traffic and conversion rates in Backstage vs. the main store in order to determine if Backstage is merely drawing from existing Macy’s store traffic or if there may be some incremental traffic gain. Conversion rates are also key. Shoppers may be visiting Backstage, but conversion rates will tell us just how well these store-within-stores are actually performing.

Macy’s has already made a significant investment in Backstage and if the concept proves to be successful, there’s no doubt we will see more.

It’s going to depend on the merchandise.

T.J. Maxx and Marshalls are successful because the merchandise is high-quality (think milled French soaps for $3 and thick bath towels for $7) and relatively inexpensive. If Macy’s will stock Macy’s-grade merchandise at a discount, this could be a success. Will this be the move that rescues the department store model? I doubt it.

With the current positive edge on holiday spending forecasts this is a smart shift that will help shoppers stretch their planned spending — all in one store. When the forecasts are up for holidays so is the traffic and chaos — so getting from one store to another to save $3 is not worth dealing with the chaos. Thus Macy’s addition in assortments with Backstage helps keep the shopper in the store — and keeps them there longer. A great competitive weapon. Also, Macy’s has a very strong online selection. They are a strong holiday choice.

It would only help if they learn from their data and put the right item on the shelf with the right price among 1000s of SKUs. Most retailers are failing primarily because they don’t know what to put on the shelf because of the customers’ fast-fashion and use-and-throw tendencies.

Macy’s is wise to use different brands than they sell in their regular store for their in-store off-price subsidiaries. As we know, upwards of 80 percent of brands sold in off-price stores and outlets are manufactured goods. Despite the wide circulation of “Myth of a Maxxinista,” many consumers remain ignorant that the branded off-price clothing found at outlets is significantly lower quality than that found at full-price stores. A name brand is indicative that the seller obtained a license, nothing more.

If Macy’s were to carry their branded off-price goods alongside their regular inventory the disparity would be evident and the illusion of “quality brand names” would be quickly dispelled. They are savvy to offer different brands, not only not to poach their own sales, but because customers who don’t understand the off-price industry would constantly demand an explanation.

In short, yes, Backstage will help elevate store performance, but only if Macy’s continues to source independent value labels for their off-price subsidiary.

Macy’s (vs. Macy’s Corp.) is a doomed store. Macy’s Backstage, in the Macy’s portfolio of retail brands, is a new off-price concept that seems to have limited promise.

Macy’s Backstage is to Macy’s as Filene’s Basement was to Filene’s.

Remember, Federated bought all the regional department stores thinking a national brand would throw off cash due to enterprise savings. Unfortunately, Federated thought brand Macy’s was sufficiently elastic to relevantly stretch across the U.S. But in those acquired markets, the original brands offered bargain, everyday goods AND luxury. It served all shoppers in the market. Macy’s has Bloomies to cover luxury, so Macy’s is mid-tier, stuck in the middle. Therefore Macy’s, in many markets, is irrelevant and now experiencing death in the middle.

Going forward, Macy’s Backstage and Macy’s will become a hobby horse of bargain and mid-tier goods and return to being a regional brand to enjoy the benefit of its New York City parade.

As Marshall Field once said, “retail ain’t for sissies!”.

Store-within-a-store? Yes, it should help. But how much will be negligible. Macy’s uses sales and discounts as a major draw. The discount cards have so many “buts” you have to ask the clerk which is the best one to use. So, as others have written, the quality of the products will determine if this test is successful and will be further rolled out.

Wait, I thought Macy’s already was an off-price store….

Off-price stores are a hot trend and this segment is out-performing almost every other retail segment. The inclusion of Backstage shops within Macy’s store is a smart strategy. It will certainly drive more traffic to Macy’s stores and they will likely achieve incremental sales from customers that are initially shopping the Backstage shop, but also shop the traditional Macy’s merchandise. When I worked at Filene’s — now part of Macy’s — we had Filene’s basement. The basement was a clearinghouse for the upstairs, full-line department stores, and had a unique cache within the brand. They had automatic markdowns that occurred every 15 days to keep the customers coming back. Consumers love the thrill of the treasure hunt offered by off-price stores and the Backstage shops are more of destination than the merchandise at Macy’s that is available online. Off-price stores are almost entirely offline, which drives in-store shopping. This is a good thing for brands that are trying to increase in-store traffic. I am bullish on this strategy and if it is successful and drives… Read more »
1
|
0
-   Share

I can’t see the average shopper seeing this as being anything other than “merchandise in Macy’s,” so any concept of it being cross promotion will be lost. OTOH if they’re trying to further blur the line between a “regular” Macy’s (in perpetual discount mode) and the Backstage stores, then this should do it.

Braintrust
"Macy’s has already made a significant investment in Backstage and if the concept proves to be successful, there’s no doubt we will see more."