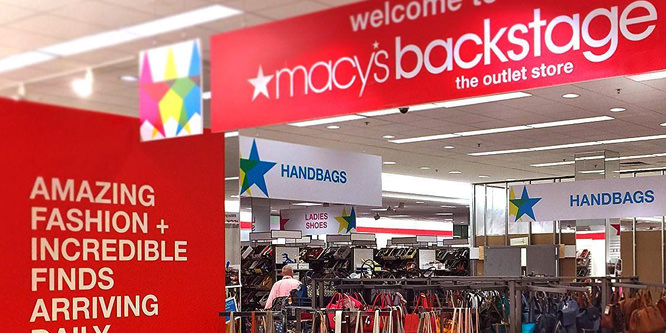 Macy’s, which launched Backstage in 2015 as an off-the-mall concept, is now focused on opening the stores inside Macy’s locations to bring the off-price experience to the mall.

On the company’s first-quarter conference call, officials said the shift came after a test of Backstage in some underproductive stores. Its Last Act clearance strategy is working in a similar way.

“We see customers liking the everyday deep value opportunity being offered within our mall locations,” said CFO Karen Hoguet on call. “We are testing a few variations of our strategy this year, but we believe from our tests so far that this will both add incremental spend from existing customers and also lead to the addition of new customers, and whichever model performs best this year, will be rolled out aggressively next year.”

Jeffrey Gennette, Macy’s CEO, said Macy’s is “still in the learning stages” on off-price retailing and acknowledged the high cannibalization risk. The Backstage mix includes many categories not largely sold in the full-line stores, such as home décor, toys and baby as well as opening-price cosmetics. The “very different” mix comes from a separate buying team of largely off-price veterans.

DISCUSSIONS QUESTIONS: Do you see the addition of Backstage driving new shoppers to Macy’s and encouraging core customers to come in more often? How will the Backstage concept affect Macy’s full-price operations if it proves successful inside the department store’s locations?

Please practice The RetailWire Golden Rule when submitting your comments.
Braintrust
"My hope for Macy's is that the company could focus on improving customer service in the traditional stores they still have."

"As long as Macy’s off-price concept features different brands than their regular inventory, their Backstage concept will be successful."

"It seems as though it would be a stretch for Macy’s to competitively navigate an off-price sector that is dominated by Ross Stores, T.J. Maxx, etc..."

“The logical end to defensive warfare is surrender.” — Napoleon Bonaparte

Someone needs to explain to me how the Backstage concept will help Macy’s pay the bills for their expensive overhead.

I appreciate the fact that Gennette admits Macy’s is still in the “learning stages” of off-price retail. I don’t think this is going to be the answer for Macy’s. A non-mall Macy’s store in New Jersey recently converted to Backstage and it was quite a turn-off for me. It was unorganized and messy, and just didn’t make sense from a retail merchandising or marketing standpoint. My hope for Macy’s is that the company could focus on improving customer service in the traditional stores they still have. I think the off-price concept is more of a sell-out for the brand.

This sounds like an acknowledgment that the department store is failing. Attempting to forge two identities and doing it successfully is difficult and dangerous. Customers are not going to see Macy’s as a full-priced merchant and a discounter both. Most will choose their version of the store and in large part stick with it. The odds are with the off-priced store being the choice and ultimately cannibalizing the department store. The incremental spend increase is probably wishful thinking. And if Macy’s shifts to off-price, they are going to bump up against a lot of competitors and just as many difficulties as they now face.

This is a winning strategy in the race to the bottom.

My local Macy’s just opened a Backstage shop and also dramatically expanded its “Last Act” clearance installation in the same store. I wonder whether customers will see the difference.

More importantly, do these off-price strategies undermine the core business that Macy’s needs to fix? And can Macy’s manage a low-margin business in a high-cost building? Time will tell, but I’m skeptical about these diversionary tactics.

Mr. Gennette’s strategy seems to come down to a single core assumption: “We think that [Backstage] could be a competitive advantage for us in that most of our ferocious off-price competitors are off-mall right now.”

There are some serious challenges to that assumption:

Trying to become “off-price” is a dangerous, slippery slope that poses many threats for the core brand. One has to wonder why Macy’s doesn’t invest more in differentiating its customer experience both in-store and online.

This may provide some short term dividends, however it seems as though it would be a stretch for Macy’s to competitively navigate an off-price sector that is dominated by Ross Stores, T.J. Maxx, Marshalls etc. We all recognize that the traditional department store model, which had dominated the shopping scene since Selfridges, is now struggling.

However, now is the time for re-invention of what Macy’s could be to the younger generation, vs. having to struggle with a new brand identity in an already crowded off-price sector of retail. What will resonate with the Millennial and Generation Z sectors is a Macy’s that focuses on multi-sensory, personalized, customized and friction-less, experience-first shopping journeys.

As long as Macy’s off-price concept features different brands than their regular inventory, their Backstage concept will be successful. However, as we’ve seen with Michael Kors and Coach, once a company goes downmarket it’s very hard to swim back up. The question isn’t whether Backstage shops will draw in customers because for the first few years they most assuredly will. The question is whether Macy’s will be able to maintain their brand image in the face of deteriorating customer service and down-market inventory.

Off-price might help Macy’s in the short term, but they are essentially putting a Band-Aid over the larger issue. A legacy brand like Macy’s needs to transform far beyond a quick fix in order to change their brand perception and bring in new shoppers.

These days it’s not so much what you offer but how you offer it. There are many off-price alternatives and I, for one, really don’t know how well Backstage is doing. Are they offering a great experience? Are they giving the consumer what she wants? If that’s the case then perhaps they can draw new shoppers but it takes more then merchandise.

Off-price is one of the hottest segments in retail and using Backstage as a lure to bring customers into Macy’s department store is a smart strategy. Backstage will attract customers (some existing Macy’s shoppers and some new customers) who are looking for the thrill of the deal and some of these people will shop the full price merchandise if they don’t find the treasure they are looking for in the Backstage section.

When I worked for Filene’s, which was acquired by Macy’s, we had the Filene’s Basement concept. They were co-located in the Boston downtown crossing location and fed off the upstairs (full line) traffic. They had an automatic markdown strategy where every 15 days the price would drop by 25 percent. People would be lined up daily to find the treasure of the day.

Macy’s has already seen a lift in overall sales in the test location, which proves it is a winner. Look for other department stores to follow this strategy …

To me, there are no easy answer to these questions. While there is certainly risk in going down market, especially in higher-rent locations, there is also the biggest challenge Macy’s faces: the relentless decline of the department store. I applaud them for making bold changes to their assortments. I have also wondered if the big off-price brands might soon begin to take up some of the cheap mall space that departments stores are vacating. This move could give Macy’s a first-mover advantage as we witness the reinvention of the mall.

This is simply trading one type of customer for another, but the new customer now expects everyday low prices and will only shop the Backstage stores. The idea of testing an off-price concept is a bit dubious. Of course it will bring in short term sales — it’s new, it’s got the Macy’s brand, it will attract shoppers out of curiosity at first. If they buy something they may come back — but they won’t be going to a mainline Macy’s any more. Even Nordstrom is feeling this effect with their Rack stores.

The key for Macy’s is to avoid overlapping merchandise in the two concepts. Their Last Act concept is the place for putting mainline Macy’s products on clearance, not Backstage. That said, what Macy’s is accomplishing is converting their existing (low performing by their own admission) mainline stores into Backstage stores. I would not be surprised to see these mall-based Macy’s become 100 percent Backstage in the future as a result.

Backstage was not created to attract new shoppers. It was created to appeal to those who reduced their shopping at Macy’s. It was protect “share of wallet.” Within an existing store, it becomes the “bargain basement.” Macy’s already has a clearance section.

It is a good faith effort to use the space. But those big boxes don’t need the same assortment at lower prices with worse service. Chasing TJX is a dead end.

Drexler, Wexner and Lundgren all stayed at the party too long.

This is too confusing: most (full price) retailers that operate off-price have a clear distinction between the two divisions — different locations, names, service levels, etc. – whereas Macy’s seems determined to mix them all together. Most people are just going to think they’re in “Macy’s.” Whether that’s a good thing or not is of course the problem they’re still trying to work on.

Braintrust
"My hope for Macy's is that the company could focus on improving customer service in the traditional stores they still have."

"As long as Macy’s off-price concept features different brands than their regular inventory, their Backstage concept will be successful."

"It seems as though it would be a stretch for Macy’s to competitively navigate an off-price sector that is dominated by Ross Stores, T.J. Maxx, etc..."