Will Best Buy rule the metaverse? 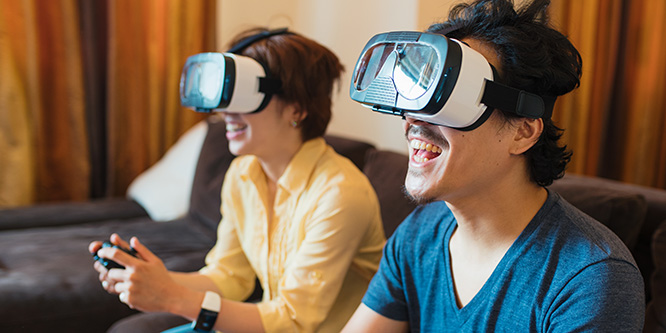 With more people than ever talking about an impending virtual reality revolution and speculating about an eventual consumer move to a shared VR metaverse, some say Best Buy is primed to emerge as the go-to retailer for the hardware that people need to get plugged in.

Brokerage and advisory firm Loop Capital Markets takes the stance that Best Buy is positioned to leverage emerging enthusiasm for non-fungible tokens (NFTs) and virtual gaming/socializing, according to CNBC. In Loop’s approximation, the chain possesses advantages in its physical store environment, which allows customers to try on/test out new VR technology, and in the presence of in-store experts who set up technology (with an add-on cost attached). Loop sees a financial opportunity for Best Buy in becoming an integral part of the upgrade cycle for VR technology, selling higher-end and pricier PCs, displays, VR helmets and ancillary equipment as they come to market and replace outmoded ones.

The metaverse was all over the news late last year, with Facebook  just before the holiday season renaming itself Meta to reflect an emerging VR focus. Over Christmas, the company’s Oculus app — required to operate the VR hardware of the same name — emerged as the top seller on Apple’s App Store for the first time during the holiday, according to another CNBC report.

Not all VR news has been positive. A recent Wall Street Journal article detailing rather severe VR-related injuries may give pause to those considering immersing themselves in the technology and the loss of spatial and situational awareness that comes with it.

Best Buy has actively searched for emerging trends in the tech and gadget space to stay on top of since successfully pursuing a turnaround in the mid-2010s.

Late last year the chain announced the acquisition of Current Health, a remote patient monitoring and telehealth company. The purchase marked a continuation of the retailer’s moves into healthcare IT.  Earlier, when the tech world was buzzing about the prospects of IoT technology, Best Buy launched a program called Assured Living meant to facilitate older adults aging at home with the help of customized, integrated suites of in-home wired devices.

DISCUSSION QUESTIONS: Do you see Best Buy being one of the main beneficiaries of the adoption of virtual reality tech by consumers? What should other retailers in the gadget/device world do to position themselves successfully in this space and compete with Best Buy?

Please practice The RetailWire Golden Rule when submitting your comments.
Braintrust
"Should the metaverse ever/finally catch up to breathless pundit forecasts, Best Buy is definitely well-positioned to capitalize."

"The metaverse isn’t here yet and I’m tired of it already, but if any company can equip consumers for it — it’s Best Buy."

"Up front let me say, as a VR provider for 29 years, don’t hold your breath for this revolution to arrive – you’ll turn very blue. "

14 Comments on "Will Best Buy rule the metaverse?"

I completely agree that Best Buy is in a good position to capitalize on interest in the metaverse and any associated equipment that may be needed. In other areas of technological innovation, such as smart home, Best Buy has proven itself adept at educating customers and selling them products. The bigger question for me is how big the “metaverse market” will actually be. I have no doubt it will grow and grow rapidly but some of the projections are ridiculously hyped up!

Best Buy, other specialty tech hardware retailers, software providers, and digital consultancies who fully understand the potential of the metaverse could become extremely powerful in this era. The success of these providers depends upon not just what they offer, but their understanding of the intricacies of the space. If you own pieces to a game, that’s great, but you have to really know the rules in order to play. This is where, for Best Buy in particular, its reputation for having highly knowledgeable employees matters greatly.

Should the metaverse ever/finally catch up to breathless pundit forecasts, Best Buy is definitely well-positioned to capitalize. Most of their stores have plenty of space to allocate to demo centers, they have the infrastructure in place to help with installation and support services, and their brand is well-established as a tech expert brand. All they need now is consumer adoption. Of which I still have lingering doubts. But that’s a subject for another thread.

Up front let me say, as a VR provider for 29 years, don’t hold your breath for this revolution to arrive – you’ll turn very blue. Yes Best Buy is well-positioned but, like every tech advancement we’ve seen, Amazon will take the lead with Walmart following soon after Best Buy makes its play.

Since it’s likely to be all about gaming for some time, Best Buy and GameStop should rule the metaverse for a while. If the idea migrates to all of retail and movies, etc., the game will change completely. There could be a new player out there too, about to dominate, like when e-commerce started and no one had heard of Amazon.

What will be the bigger market? The metaverse or the Internet of Things? I’m betting the IoT. Either way, Best Buy will be a huge player. But so will Target and Walmart. And the brick-and-mortar stores that Amazon will surely open.

In the short term, IoT has a head start, but the frustrating lack of standards reminds one of VHS versus Beta except more complicated for the average person to discern. I’ve had multiple hubs and hardware that talks to one and not the other. It’s a mess. VR seems a lot more straightforward, albeit a few options, and the average person can pretty much put on a headset and go. And, interestingly, my kids are both into VR and only one is into IoT, so I wonder how that translates across a wider base of Millennial/Gen Z. I’m betting on VR getting more substantial traction as headset prices normalize and content increases.

I am with Dave Bruno. Best Buy is very well positioned to reap the benefits and lead in sales. However the need for special gear in order to join a virtual universe may keep the appeal of the metaverse down to a dull roar.

Best Buy is well positioned and it would behoove them to add key strategic partners in the space to continue to expand offerings and wrap-around services for their consumers. I’m very lukewarm on the whole metaverse hype. Instead, my advice to Best Buy would be to double down on their in-home and telehealth services that they have invested in and triple down on their in-store education programs for their associates. As techie gadgets and meta-whatever offerings become more complex, consumers will desire answers and Best Buy associates can be the primary link to solving problems, delivering great in-store experiences and extending customer lifetime value.

The metaverse isn’t here yet and I’m tired of it already, but if any company can equip consumers for it — it’s Best Buy.

Best Buy is primed and ready to embark on the metaverse but they are not the only players out there.

Luxury and performance brands are collaborating and gaining momentum in the space. The beauty industry is also well positioned to shine in the metaverse.

With exclusive product launches and parties like Decentraland, the sense of community and opportunity to socialize outside of gamification is very attractive to influencers as well as consumers. There is a lot of opportunity to be successful in this space and compete across verticals but also collaborate with unexpected partners.

Best Buy for hardware? Sure, initially. However there are certain to be other players coming into the space.

Then I remember showrooming. That’s when a customer kicks the tires in-store and then seeks the best price online. I bet that’s where this is headed.

As someone who actually engages in the metaverse, it’s already here. I’ve been engaged in it for a couple years so I have to chuckle a bit when I hear people talk about it like it’s something new, coming down the road. Granted, adoption will take time and perhaps AR will outpace VR given the easier-to-envision applications. Sure, Best Buy could be a player in this space, but until now they really haven’t been anything more than a place to buy the headsets and related tech (along with Amazon, Oculus/Meta, and a bunch of others). So before you dismiss VR, strap on a headset and experience it. The train has left the station…

Best Buy has a reputation for carrying and helping consumers with computers and related technology. It is a natural place for consumers to think of when considering VR technology. It would be smart for Best Buy to become familiar with the application and use of the VR hardware to help their customers. Other retailers can offer the hardware and coaching on the VR application, but Best Buy has a reputation that is hard to beat.

Braintrust
"Should the metaverse ever/finally catch up to breathless pundit forecasts, Best Buy is definitely well-positioned to capitalize."

"The metaverse isn’t here yet and I’m tired of it already, but if any company can equip consumers for it — it’s Best Buy."

"Up front let me say, as a VR provider for 29 years, don’t hold your breath for this revolution to arrive – you’ll turn very blue. "