Will displaying produce by season set a new grocery concept apart from rivals? 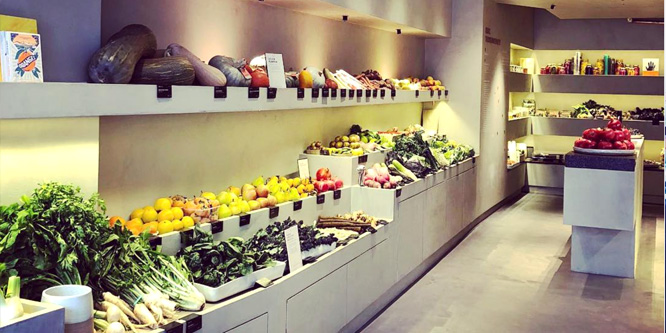 At the new Natoora store concept in the U.K., customers can expect the vegetables to be broken out into many more categories than a traditional — or even an organic — grocery store.

The new concept, which opened in the west of London, splits vegetables out by seasonality, identified as being either early, peak or late, according to Fresh Produce Journal. The selection will, according to the retailer, allow customers to “experience the subtle shifts in seasonality mainstream suppliers have eliminated in favour of uniform, year-round produce.” Rather than buying from mainstream distributors, Natoora is purchasing its products for the new concept from small-scale growers and provides information on such elements as the seeds and type of soil used to grow them.

Labels touting the environmentally-friendly characteristics of foods, especially meat and dairy, have been popular for some time. “Free-range,” “pesticide-free,” “natural” and “organic” are common in both mainstream and niche green grocers. Rarely, though, do distinctions get so granular for fruits and vegetables as what Natoora has on offer.

But with an increased public awareness of issues like fresh food waste caused by supply chain inefficiencies, there could be more demand for fruits and vegetables with more transparent sourcing. With increased awareness, more customers could begin to develop preferences around factors like seasonality.

Stateside, a wide variety of grocers, including Whole Foods, promote their commitment to stocking local produce in-season and providing information on its origin. Whole Foods defines “local” as grown within a day’s drive away or less.

The chain also piloted a program in 2016 that sources “ugly” produce — fruits and vegetables that are still good to eat, but may appear imperfect to customers.

Some smaller organic players have already begun to offer a degree of guidance on issues like “clean” eating. Earth Fare, for instance, has begun publishing a magazine specifically geared toward teaching customers how to eat in keeping with the philosophy.

But it’s not totally clear whether sorting vegetables out by seasonality would be something larger grocers could manage at scale or that customers outside a small niche would be interested in.

DISCUSSION QUESTIONS: Do you see a concept such as the new Natoora store having appeal beyond a limited audience? Is the enhanced degree of information about vegetables on display valuable enough to inspire other grocers to follow Natoora’s lead?

Please practice The RetailWire Golden Rule when submitting your comments.
Braintrust
"I think regardless of your income level, there is a demand among consumers to be more educated about their food and where it comes from."

"Retail practices that take advantage of food realities (seasonality, perishability, etc.) ignored by the mainstream will continue to see opportunity."

"This is a niche concept for people who want great produce and don’t mind spending money to get it."

8 Comments on "Will displaying produce by season set a new grocery concept apart from rivals?"

The fact that Natoora’s new store is in one of the most affluent and well-heeled parts of London says quite a lot. This is a niche concept for people who want great produce and don’t mind spending money to get it.

This is not to discredit Natoora which has a much bigger business supplying restaurants and partnering with retailers like Waitrose, Ocado and the U.K. division of Whole Foods. I think that is where the real growth for the company lies.

I think this is a great idea. Consumers have become way too disconnected from their food. This is an ideal way to help educate consumers about the reality of where their food comes from. I don’t know how you handle grapes from Chile in the spring – are those “in season” even though they came from a hemisphere away? But I think regardless of your income level, there is a demand among consumers to be more educated about their food and where it comes from – and that this has a direct tie to their well-being and health. I just will never forget Jamie Oliver’s series on school food in the U.S. (trying to replicate what he’d done in the U.K.), where kindergartners did not know how to use a fork and knife, and could not identify basic vegetables. I hope that was a rock-bottom moment for the American diet, and that it is only upward-bound from there. But for retailers, this is a very simple move that actually conveys a lot of information and… Read more »
1
|
0
-   Share

This is a great idea that will appeal to certain consumers who crave more knowledge about where their food comes from and how it is grown. Shoppers that look for those details are already likely thinking about seasonality. In fact, in my suburban area where we are surrounded by many organic farms, many shoppers base their purchase of fruits and vegetables on what is locally grown and everyone knows what to expect at the start of each season. As a grocery store concept, this would have fantastic appeal in our area.

The idea has potential, but it’s a long way from mainstream. Retail practices that take advantage of food realities (seasonality, perishability, etc.) ignored by the mainstream will continue to see opportunity. The opportunities may start as niche, such as Natoora catering to a more affluent Londoner crowd, but I think will catch on more broadly as consumers become more interested in their food.

“Not totally clear … that customers outside a small niche would be interested…” I agree, and this observation could, of course, serve as an epitaph for many a “great idea” that never took off.

This is an interesting play. But I’m struck constantly by how privileged someone has to be before many of the new retail concepts apply.

We remain living in a world where an apple is often more expensive than a McDonald’s burger. And an approach like this seems like to add to the cost of an apple — driving poorer citizens to have to choose the burger over the fruit.

That said, this is also why a concept like this might be just fine in upscale retail, but isn’t likely to see the light of day outside it.

I think one has to see Natoora within the context of the location.

Similar concepts already exist in most large affluent US cities, and the Natoora concept will lack the exploration or discovery factors that exist in the communities’ farmer market.

Any experimentation in how retailers display vegetables can provide valuable insights as to what different shopper groups favor, which has the potential to boost revenue and market share.

Personally, I have been sometimes baffled by the location of different vegetables at my local markets. Why are the purple carrots next to the purple turnips – because they’re both purple? And how did carrots get to be purple anyway?

Braintrust
"I think regardless of your income level, there is a demand among consumers to be more educated about their food and where it comes from."

"Retail practices that take advantage of food realities (seasonality, perishability, etc.) ignored by the mainstream will continue to see opportunity."

"This is a niche concept for people who want great produce and don’t mind spending money to get it."