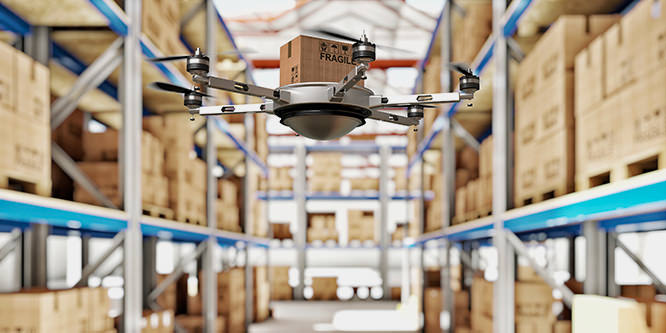 It’s unusual, but this is one of the few times when the use of drones in retail is being seen in a media report that doesn’t focus on Amazon.com. No, according to reports, it’s none other than Walmart that plans to test the use of drones in distribution centers to help deliver real-time inventory data to employees and move products around and out of facilities in the fastest, most efficient means possible.

In the test, which will start somewhere in the next six to nine months, Walmart will use proprietary tech to enable camera-equipped drones to speed up counting and keep track of inventory.

The company maintains that a drone can accomplish in a single day what it would take humans a month to do. If the drones work as advertised, they could save Walmart millions of dollars that could be used to the retailer’s advantage. The company currently operates around 190 distribution centers around the U.S.

In an interview with Reuters, Shekar Natarajan, Walmart’s vice president of last mile and emerging sciences, said the drone test is just a beginning for the retailer.

“We are still in early phases of testing and understanding how drones can be better used in different types of business functions,” he said.

DISCUSSION QUESTIONS: What is your reaction to Walmart’s test of drones to assist in the management and movement of inventory in the company’s warehouses? What other uses do you see for drones in DCs? Do you think drone technology holds more potential for use in distribution centers or for delivering goods to consumers?

Please practice The RetailWire Golden Rule when submitting your comments.
Braintrust
"Precision flying is not a big challenge these days, so long as the batteries hold out."

"It is a good start to a broader drone distribution and logistics strategy."

As usual, Walmart uses simple logic vs. flamboyant marketing to leverage new technology. Doing inventory stock situational analysis via a drone is a smart way to leverage the drones — especially across a huge warehouse. Doing it as in the past, by people, takes months and must be boring and a pain, like when my son did daily inventory of the hardware store where he worked. The owner was sure employees were stealing from him.

GO WALMART GO – no need to be stupid with drones as your small competitor was.
Ankle biting Amazon….

Another data point showing that Walmart has not lost its R&D edge. Walmart’s reported intention to pilot drones in their DCs emphasizes the core strength of the company: their supply chain and logistics. Pending results, this move can reduce DC labor cost, make for better use of efficient forklift assets, improve service levels to stores and keep shelves better stocked in stores. The integrity of the inventory numbers will get a real boost. Drone technology combines miniature design, high tech optics, live video feeds, constant area coverage and connectivity to effectively expand the choice set available to retailers and CPG companies. They bring human ‘eyeballs’ wherever they need to go to inspect a hot spot, check a bottle neck on the shipping dock, trouble shoot an out of the way conveyor belt, and so on. They can have a real role in yard management that can supplement RFID. What’s really exciting about drones is that they add capabilities to increase agility, speed of response, and increase operational efficiencies. The upside is that this inventory accuracy… Read more »
4
|
0
-   Share

Excellent move by Walmart. As Amazon tests drones to deliver packages, Walmart steps up to deploy drones in warehouses to manage inventories and improve efficiencies. I like the fact that Walmart’s proprietary technology is mounted on top of each drone and administered by a control tower. It appears real-time inventory data collected by drones will be shared with employees to take care of in a timely manner.

It is great to implement and fine tune this proprietary technology. It is a good start to a broader drone distribution and logistics strategy, first used in-house and ultimately for home delivery and curbside pickup, when regulations allow. Go Walmart!

Profitability in the 21st century is all about speed and automation (fewer humans in the process). Drones help compress time and process. This is the competitive advantage of logistics today. As Walmart succeeds and realizes savings, others will follow.

When Walmart says “a drone can accomplish in a single day what it would take humans a month to do,” for some reason I see that as not very complimentary of their employees. I’m seeing more and more Supercenters going from 24 hours to closing at midnight or 1 a.m. I can see drones moving out of the distribution centers and into the stores. I vision robots and drones buzzing around Supercenters at 2 a.m. stocking shelves while being operated by low level Millennial “gamers” making $15 a hour. We now have one person supervising 8 self checkouts. We might start seeing one person supervising the remote control shelf stocking of 8 aisles.

It seems like a rational, incremental improvement of existing systems, not a publicity stunt like … an unnamed other company.

Whether or not it will work in the hectic, confined space of a DC I don’t know. I suspect if it doesn’t, we’ll eventually hear about it.

Getting past the cool factor of using a drone, it makes perfect sense. Using a drone for delivery or to move product is expected. And that the ability to scan on the fly (can’t resist) is more efficient. Efficiency can mean a better experience for everyone. Maybe even lower prices for consumers and a little more margin for Walmart. Maybe it’s time to buy more Walmart stock.

If successful, it could strengthen their already strong logistics competency and the savings would allow them to keep up with their low-price model even better. In the shorter-term, it seems like a more realistic and practical application of drone technology vs. customer deliveries (and one that actually impacts their bottom line positively).

One of the key ingredients used to determine a tool’s practicality and longevity in a distribution center, or any active warehouse for that matter, is the physical endurance abilities built into the proposed device. The drone pictured in the discussion did not appear to be made from titanium or any reasonable facsimile material. So for that reason I would submit an expected lifespan of about one to two weeks for the entire fleet. It is and has always been amazing to me how quickly that stuff gets run over or crushed when at rest or in use.

I absolutely love this story. Drones are little scary out in the wild, but within the controlled confines of the DC they can move rapidly in three dimensions and point a digital eye at every slot in the warehouse.

Precision flying is not a big challenge these days, so long as the batteries hold out. The critical factor will be the machine vision application that reliably converts captured images of items into structured data that can be used in the supply chain process.

Item recognition has proven maddeningly difficult in the retail store environment, but in the controlled environment of the DC every unit is a rectangular corrugated box with a graphical code on the outside. Piece of cake!

I confess I’m a habitual critic of the Great Wal, but in this instance, I think it deserves praise for “outside the boxes” thinking.

Braintrust
"Precision flying is not a big challenge these days, so long as the batteries hold out."

"It is a good start to a broader drone distribution and logistics strategy."