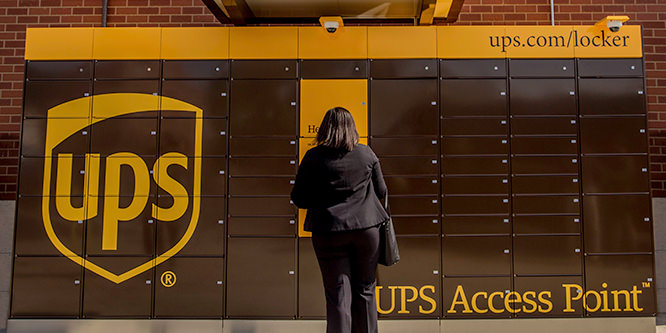 The lockers, that look similar to ATMs, are usually outside and accessible 24 hours a day at 7-Eleven locations as well as other independently-owned c-stores. Customers scan their InfoNotice alert or tracking number and their government ID to gain access to the locker holding their package. The process takes less time than getting cash at an ATM, UPS said.

The lockers are needed for the “e-commerce stranded,” or those who live in a residence where front door delivery is not possible, says the company. But the service offers convenience for all. According to the recent UPS Pulse of the Online Shopper study, more than half of avid online shoppers — those who make two or more online purchases in a typical three-month time period — are interested in an alternate delivery location with extended hours.

With e-commerce deliveries higher than business-to-business ones, carriers are looking to cut expenses. The Access Point system means drivers can consolidate deliveries into a single stop and save the time and fuel involved making second and third home delivery attempts.

The rollout supplements an existing Access Point program through which UPS pays local merchants a small fee to act as a package pickup location. The carrier has more than 8,000 such Access Points with stores. UPS pays a flat fee for the locker rentals.

Amazon launched its Locker program in 2011 and has opened them in most major U.S. cities.

DISCUSSION QUESTIONS: Do you see drop-off points playing a large role in reducing the costs of online shipping? Do customers, online retailers or the shipping carriers benefit most from local drop-off points?

Please practice The RetailWire Golden Rule when submitting your comments.
Braintrust
"If lockers really catch on, there could be an additional 5 to 25 percent of the U.S. population who enter their target audience."

"Drop-off points will help all parties, including sellers, buyers and shippers."

We’ve been talking about this for years. When I worked in the oil industry decades ago, there was a lot of talk about using gas station real estate for dry cleaning drop-off and other purposes. That said, we haven’t made much progress yet, and the reason is that the business model is still unsettled. It will be interesting to see if this approach sticks.

The lockers are a great addition to the mix of delivery options, but they will always only serve a niche market. For the majority of consumers, lockers are an inconvenience, so home delivery will always dominate. I haven’t seen any sign of cost savings being passed on to consumers, but if they are, they may have a minor impact on increasing merchant sales.

In no way will locker solutions put Internet-only merchants on par with brick-and-mortar stores in terms of balancing shipping expenses or true customer convenience, so the biggest beneficiary are the carriers.

In certain markets, this makes total sense. I speak from experience — actually my daughter’s experience — in that the “package-pickup locker program” works. There are many people who prefer this system rather than having a package left outside the door or at a neighbors. And it’s easier for the carrier. It’s a win/win.

Win for the customer: Convenience. The lockers are usually close — in urban areas within walking distance.

Win for the carrier: Huge time savings. No longer does the carrier stand at the door waiting, eventually finding a neighbor to hold the package, leaving a note or having to return on another day to try again. Time savings means money savings.

I don’t see drop-off points having any impact on the cost of online shipping, even though consumers and shippers benefit from having them. Drop-off points are great for consumers who 1. Don’t have access to direct door delivery, or 2. Fear that a package may be stolen from their porch before they can collect it. It will be interesting to see how many drop-off points UPS (or other shippers) will have to establish to effectively cover a geographic area.

Unless retailers incent the use of drop-off points with a lower shipping cost, they will simply be another option for consumers to get their goods most conveniently (in addition to shipping to home or work and store pickup). For drop-off points to play a large role in reducing the costs of online shipping, merchants will have to share some of the savings with consumers as a way to drive that behavior.

I think that both the customer and online retailer will benefit greatly from these new drop-off locations. Customers that have trouble receiving deliveries may be more inclined to purchase online knowing they won’t have the added stress of possibly missing their package or having it stolen. It’s also a win for online retailers who will save on shipping costs and will hopefully see an increase in sales. This is a positive move for both customer and retailer.

The final few feet toward a purchase being in hand is the customer experience tip of the supply chain and fulfillment iceberg. And for brands it is the final moment of truth, when the customer will decide what their relationship will be with the brand and how they interact with it in the future. Where ship-to-store certainly serves the retailer in gaining store traffic and dwell time, it can be a nuisance to customers. Rearranging parcel delivery or tracking it down with neighbors is a whole new level of grief. Drop boxes respect a customer’s busy schedule and offer one more point of convenience. As the postal service superbox has relieved the cost of delivery to the door, the retail drop box is a natural extension of online commerce where customer experience must play out to the final moment of truth.

The benefits to “location-challenged” consumers is clear — online shopping is now a practical convenience instead of an added hassle versus brick-and-mortar. Equally clear is the benefit for the carriers. What I am waiting to see is the impact for online retailers in terms of expanded potential customer base. If lockers really catch on, there could be an additional 5 to 25 percent of the U.S. population who enter their target audience. That could be a huge boost to penetration of online shopping.

While this may never reach mainstream status, it does offer convenience and cost-cutting for consumers and shipping carriers, respectively. It also give retailers one more option to offer their customers.

Additionally, retail sites where these Access Points are co-located will get more foot traffic and potential sales.

Bottom line, consumers love to have options and Access Points do just that for specific situations while simultaneously being a more efficient mechanism for shipping carriers.

Drop-off points will help all parties, including sellers, buyers and shippers. For sellers, it’s a great way to have a secure place to ship items without having to open stores. Amazon, for example, has opened up drop-off/pickup points on college campuses — a brilliant way to continue a relationship with the next generation of consumers. Drop-off points also have been great ways for city dwellers and others to receive packages securely and not have to worry about packages being nabbed from their front porches or outside their apartments.

I see this as a huge financial undertaking by someone — I assume UPS. So who is going to pay for them to recoup their investment? Also, are they going to be charged rent for the space by the property owners? Nothing is free.

The high traffic, highly visible location of the lock box makes it an excellent candidate for including a digital sign that can deliver advertising revenues. Just as in-store signage is used for branding and merchandising messages (think Walmart, etc.), the lock box is part of the customer engagement experience and path to purchase. Watch for UPS and other lock box providers to carry ad messages on digital signs.

Initially, I see this mostly as a customer benefit. Perhaps as adoption grows, carriers may see benefits of scale by doing batch drop-offs instead of driving to every single household.

While drop-offs aren’t for every customer, I know a number of people in urban and suburban settings who now use them almost exclusively for their e-commerce purchases. The convenience of dropping by a FedEx Office or UPS Store retail location in the evening after work or on the weekend is a major plus for busy households where someone can’t always be home to sign for a package during regular delivery hours and who don’t want packages sitting unattended.

Perhaps retailers and carriers should partner to promote lockers and pickup points with promotional pricing or speedier delivery times. I believe by encouraging more trial, we can help consumers learn the distinct benefit of getting their packages anytime—not just when the delivery driver knocks on the door.

Braintrust
"If lockers really catch on, there could be an additional 5 to 25 percent of the U.S. population who enter their target audience."

"Drop-off points will help all parties, including sellers, buyers and shippers."