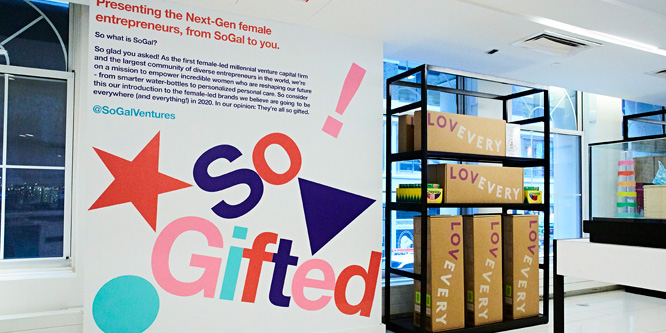 Open through January 2020, the SoGifted concept shops support Macy’s newly established diversity and inclusion goals, which include increasing representation and advancing the growth of under-represented suppliers.

SoGal has guided more than 65 companies, reaching a network of more than 100,000 entrepreneurs.

“Our mission is to build a firm that embodies the cultural values that we want to see in the world,” said Elizabeth Galbut, SoGal’s co-founder. “With the partnership at Macy’s we’re taking this a step further and giving in-store shoppers across the country an opportunity to discover and support female-led small business brands — so the next generation of women can be empowered to know that entrepreneurship is within their reach.”

SoGifted, with brands such as TomboyX, Ettitude and Quirktastic, “brings diversity to Macy’s gifting mix,” the retailer said. The gift shop will also highlight the gift shop during “entrepreneurial focused events,” including a launch party and panel discussion with some of the female founders at its Herald Square flagship, as well as beauty and trunk shows and wellness-focused event content.

Macy’s work with the retail-as-a-service company, B8ta, paved the way for the SoGifted effort. Macy’s acquired a minority stake in b8ta and using the company’s software platform to support The Market @ Macy’s, which offers a rotating selection of emerging and established brands. Macy’s partnership with STORY also supports emerging brands.

Nordstrom supports emerging brands through its rotating “Pop In @ Nordstrom” concept, and Kohl’s is spotlighting start-ups through a curation partnership with Facebook. The Sephora Accelerator program, launched in 2016, supports female-founded emerging brands in the U.S., Canada, Mexico and Brazil.

DISCUSSION QUESTIONS: How likely are pop-ups focused on female-led start-ups to drive added traffic to the Macy’s stores where they are positioned? Is this an approach that Macy’s should expand to more of its stores?

Please practice The RetailWire Golden Rule when submitting your comments.
Braintrust
"Macy’s is smart to go all-in with limited-availability partnerships and women-led business in particular. "

"The idea might register on social-networking platforms, but what about driving volume?"

"Here we go again. Female-led startups as the poster child leveraged by a retailer to promote their own business..."

8 Comments on "Will female-led pop-ups add pop to Macy’s Christmas?"

While this is very worthy, success will be determined by how compelling the offer is – not by the mere fact products come from female-led businesses. As with a lot of things Macy’s does, this is interesting but it won’t move the dial. Too much rot has set in at Macy’s and there isn’t nearly enough effort being exerted to overhaul the foundations of the business.

It’s a worthy idea (especially if the product is great), but as with so many Macy’s initiatives we talk about on RetailWire — how is a seven-store initiative supposed to move the sales needle? The idea might register on social-networking platforms, but what about driving volume? This seems far too typical of the cautious Macy’s mindset these days.

Female-led start-ups may attract attention and certainly the businesses offer a lot of positive press and interest, but the success will depend more on the appeal and value of the products to consumers.

Great addition to the arsenal! Macy’s is smart to go all-in with limited-availability partnerships and women-led business in particular. Women-led businesses are definitely a thing these days and Macy’s shouldn’t sit it out. Some of these businesses also address the identity spectrum making things even better for Macy’s as it casts a wider niche net. Initially, shoppers may not be aware of every partnership Macy’s has forged but word should travel fast thanks to these brands’ already-developed content and social media platforms. Many brand tentacles makes for a better Macy’s holiday season. The question is whether Macy’s can or will keep it up. If not, Macy’s may face a post-holiday buzz kill.

I thought we settled this in previous discussions. These efforts are all fringe “niceties” with little real business value. Macy’s needs to get their core business right, else these dalliances will do nothing but hasten their ultimate decline.

Here we go again. Female-led startups as the poster child leveraged by a retailer to promote their own business, in this case, Macy’s. The anthem, embrace “women thinking” as a means to generate goodwill and market buzz for Macy’s. This is all doublespeak. Likely well over 50 percent of Macy’s customers are female, who according to statistics purchase 87 percent of all goods retailers like Macy’s sell. Think about it. Macy’s has made the statement, yes, we know women are disadvantaged by the fact they are a female. We fully support the 51 percent female global population “minority” by enabling female-led companies to showcase their goods at Macy’s. Wow!

These pop-ups may generate some incremental sales. But will they generate a shopping trip to Macy’s that would not have otherwise happened? I doubt it.

Full disclosure; I love pop-ups. Why wouldn’t you want to pay two months rent at peak season vs. 12 with 10 iffy months? And if you’re a dot-com, it’s essential. But — question for Macy’s; isn’t this what department stores have done for over a century now? You know — bring in a hot merchant, if their goods sell, they stay; if not, bye bye? What’s new here? The PR?

Also, how’s that Story thing working out for you on the rev side? Driving sales or just a great looking display? Somehow I’m thinking the latter. Please correct me if wrong.

Braintrust
"Macy’s is smart to go all-in with limited-availability partnerships and women-led business in particular. "

"The idea might register on social-networking platforms, but what about driving volume?"

"Here we go again. Female-led startups as the poster child leveraged by a retailer to promote their own business..."