Will Five Below’s sales go above and beyond with a new store-in-store concept? 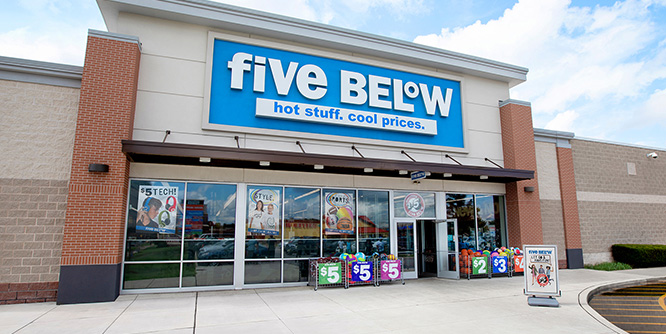 Five Below shoppers have proven willing to spend more than just $5 on the items they find in the store. With that in mind, the value retailer is expanding its Five Beyond store-within-a-store concept, which features products with higher price tags, to one-third of its stores nationwide.

CEO Joel Anderson announced the expanded rollout of the Five Beyond concept earlier this month, according to a Yahoo News report. The concept was born out of Five Below’s test run of a higher-priced store section called Ten Below that it has been piloting over the past few years.

In late 2019, after 17 years of exclusively selling products below $5, the chain began its test of Ten Below, which featured sub-sections with names like Ten Below Tech and Ten Below Gift Shop. The idea emerged as the chain began facing higher costs it could not absorb in key categories like technology. The launch of the new section was accompanied by a new logo: “Cool Stuff. $1-to-$5-to-$10.”

The new Five Beyond name, however, gives the retailer more wiggle room with product prices no longer constrained by either a $5 or $10 ceiling.

The planned expansion of the Five Beyond concept is not the only (slightly) upmarket move the chain has made recently. At the end of 2020, the retailer announced a partnership with Instacart to offer same-day delivery and curbside pickup in select major markets.

Dollar General, for instance, announced plans late last year to launch a full retail concept called popshelf aimed at a more affluent customer base. Popshelf markets to women from households earning between $50,000 and $125,000 per year, whereas the concentration of Dollar General’s core customer base is women from households earning $40,000 per year. The retailer anticipated opening 30 stores in suburban markets near major cities within a fiscal year.

DISCUSSION QUESTIONS: Will Five Below’s Five Beyond store-within-a-store concept prove successful? Which do you think is more likely: that Five Below will eventually expand Five Beyond to most if not all its stores or that it will create standalone stores under the concept’s banner?

Please practice The RetailWire Golden Rule when submitting your comments.
Braintrust
"It seems most 'dollar' concepts eventually migrate up to higher dollar values as a way to drive revenue growth, and so this move by Five Below is not unexpected. "

"I believe this is a great concept and will be rolled out to all stores."

"Leveraging their success with value-conscious consumers by introducing higher-priced goods is a smart move if the new products are still provided at a discount..."

13 Comments on "Will Five Below’s sales go above and beyond with a new store-in-store concept?"

It seems most “dollar” concepts eventually migrate up to higher dollar values as a way to drive revenue growth, and so this move by Five Below is not unexpected. Creating a store-within-a-store approach is interesting, but it’s also a more expensive way to add higher value goods to the product mix at scale. I suspect that ultimately they will simply roll in the higher priced goods to all their stores.

I’m not sure I understand the strategy of having a special place in the store for higher priced items. Ive seen some retailers do this with budget items, see Target’s front of store budget “spot” for an example. My question is will there be overlap in categories? Will shoppers have to shop two sections of the store to complete a trip because the lower priced offerings were in one section and the higher priced offers, in the same category, are somewhere else? The move to higher priced items has been consistent across the dollar store segment and I’m not surprised that Five Below is doing the same thing. I suspect as my colleague Mark Ryski has already pointed out that over time this “area” will be incorporated back into mainline assortments.

You could be right about the inconvenience factor but with this particular store, I think the fact that it is a relatively small footprint will make it more of an opportunity to discover rather than an inconvenience to get to in the store.

The core of Five Below’s proposition is interesting products at great prices. So while it is important for the chain to keep a lot of items below $5, it does not preclude them from offering a selection at slightly higher prices. Their customers have already shown a willingness to trade up in trial stores and rolling this out to more outlets will help boost sales and, more importantly, margins.

As Mark notes above, this isn’t a unique or first-time approach for dollar stores. The reality is that customers don’t come in to spend just a dollar (or $5 as in the case of Five Below). They are looking for extreme value. Combine that with the increasing costs that retailers face, and it just makes sense to include higher priced items in the store assortment. Look for Five Below to expand this into all stores eventually.

I believe this is a great concept and will be rolled out to all stores. My grandkids love this store but they don’t go in alone. I always go with them and give them a limit but sometimes that limit is stretched and having options that appeal to the parents and grandparents certainly fills a void created by the loss of iconic brand like Toys “R” Us, FAO and the like. The missing link in toy shopping is the touch and feel and this concept will bring that back for children and adults.

It’s a low risk experiment. The price point for this store-within-a-store is still well within dollar store expectations, so they are continuing to speak to their existing customer base. It really is just a smart way to add another layer of “treasure hunting” to their stores, which may give their shoppers a reason to visit the store a little more often, and perhaps grow basket size without adding any operational cost to the store bottom line.

Leveraging their success with value-conscious consumers by introducing higher-priced goods is a smart move if the new products are still provided at a discount to maintain their overall brand strategy. However the execution of this concept via a store-within-a-store may be better served by simply including higher priced goods throughout the rest of the store but noting it with a special “Five Beyond” price tag or shelf label indicator.

It sounds like they are gunning for the same “differentiated, guilt-free, joyful shopping experience” that popshelf is going for — which is a great move in my mind. Shoppers that love the thrill of the hunt will likely flock to this and agreed, it fills a void while also motivating people back into physical stores.

I admit I don’t go to Five Below for the price. Browsing their store is like a treasure hunt experience and I don’t feel cheated having to pay more than $5 once in a while when the product is really interesting and seems like a bargain even at a higher price. I like the branding of Five Beyond, which seems to create the least dissonance with the current branding and seamlessly extending the current concept it to justify the higher price. Having said that, calling Five Beyond a store-within-a-store seems like overkill, given their stores are generally very small – 4,000 to 8,000 square feet.

“Beyond” covers a wide territory: some of it is $10.95 and some of it is $109.50 and some of it is more … like a Testarossa. One of the advantages of these (somewhat arbitrary) pricing strategies is that they force someone to focus on — and hopefully perfect the selling of — a narrow range of products (and perhaps a narrow range of customers as well, though the idea that price correlates absolutely to income seems simplistic). Moving outside that narrow range can be liberating, but it will become ever more important to make clear exactly what it is they are offering, since less-and-less will it be price. I wish them well that they don’t lose focus.

Concept implies innovation – this is not innovative at all. This is a strategy to capture a new market segment of “women from households earning between $50,000 and $125,000 per year.” This demographic has other places to shop without the stigma of shopping at a bargain retailer.

Five Below’s store-within-a-store concept will be successful initially — until the novelty wears off.

Braintrust
"It seems most 'dollar' concepts eventually migrate up to higher dollar values as a way to drive revenue growth, and so this move by Five Below is not unexpected. "

"I believe this is a great concept and will be rolled out to all stores."

"Leveraging their success with value-conscious consumers by introducing higher-priced goods is a smart move if the new products are still provided at a discount..."