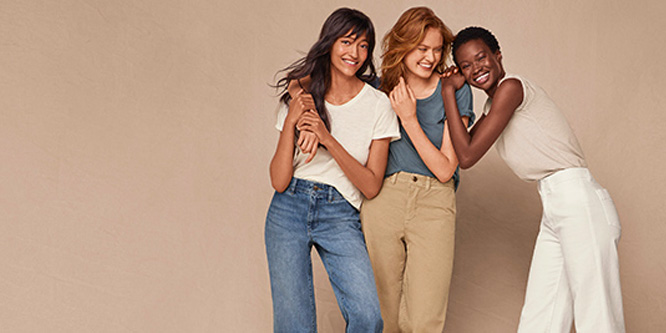 Gap Inc.’s pilot of its Bright Rewards program has shown strong results in increasing transaction sizes in test stores. Now, the clothing retailer is going to see if early results at Banana Republic, Old Navy, Athleta and Gap brand stores in Atlanta, Dallas and California can be replicated as it rolls out Bright Rewards across its banners nationally.

The rewards program, which surpassed five million members this month, was launched in 2017. Members can acquire points with every purchase which, in turn, tend to lead to further purchases.

“Bright Rewards is exceeding our expectations and driving positive engagement with members more likely to shop more often, resulting in their spending as much as 20 percent more than non-members,” said Abinta Malik, head of loyalty at Gap Inc., in a statement.

Ms. Malik said Gap was looking to distinguish its program from run-of-the-mill rewards offers that go beyond earnings points to make purchases.

“Birthday treats, points for reviews and extended hours for loyalty events are all being considered as ways to make Bright even more rewarding,” she said.

Gap is looking for the Bright Rewards program to help the company boost sales following a first quarter earnings report that saw same-store sales down four percent compared to a one percent rise during the same period last year.

In February, Gap Inc. announced plans to spin off its Old Navy division into a separate publicly traded company while the rest of the banners would be grouped under another as yet unnamed corporation currently being referred to as NewCo.

DISCUSSION QUESTIONS: How likely are the results from Gap’s Bright Rewards pilot to hold up on a nationwide basis? How much can Gap — or any other retailer or consumer direct brand — expect a rewards program to boost shopping frequency and average ring metrics?

Please practice The RetailWire Golden Rule when submitting your comments.
Braintrust
"Gap would be wise to take a cue from those aforementioned consumer direct brands–it’s about long term relationship management and customer recognition. "

"As the saying goes, “all talk, no action.” Loyalty is a misguided Band-Aid designed to stoke stock prices rather than face the decade-old truth of lack of product innovation."

"I’ve never seen anyone say the reason they don’t shop at Gap is rewards. Fix the product and store design and you fix a wealth of problems."

It is interesting that Gap hails the program, but I cannot see the overall impact on sales being all that dramatic. Gap does have a habit of talking a good game while putting in an appalling performance on the field.

I second this, Neil. I was a Gap store manager in the late 70s; I agree that the problem is what’s not happening on the sales floor. Aside from fixtures and graphics, not much has changed layout-wise, and each new season the clothing is a variation of the same old, same old. The article says Gap is looking to distinguish itself from run-of-the-mill rewards programs, it might try that with product as well.

I’ve never seen anyone say the reason they don’t shop at Gap is rewards. Fix the product and store design and you fix a wealth of problems.

Bob, I owe you an agreement. A rewards program without fixing the product is just a leaky bucket.

If Gap can do something with its program members then maybe it can drive comp growth in the very low single digits. Clearly the company isn’t expecting a lot more or they would not be guiding the Street as they are. Nor did they report how the stores in test markets performed but we can only infer that two years in they’ve got to expand to stem the declines.

Gap’s innovation is relative to Gap. Expanding a tender-only program to largely one-dimensional omni-tender is not exactly breaking new ground. Strip away the logos and this is utterly generic other than the ability to shop across its brands.

Where is there anything experiential and non-transactional? Other than packaging discounts in the form of rewards, what will this do to drive a higher emotional attachment between customers and the Gap brands? Unless Gap becomes exceptionally good at ongoing customer management — which this program enables but doesn’t do on its own — this program rollout is not going to make a long-term sustainable difference in its business.

I totally agree with this. Exclusive experiences are what’s missing from Bright Rewards. And even so, the value of experience should extend beyond Gap’s loyalty program. Gap would be wise to take a cue from those aforementioned consumer direct brands–it’s about long term relationship management and customer recognition. Birthday “treats” (read: a percentage off?) and extended offers are less about the customer and more about the retailer. It will be interesting to see how this loyalty program evolves over time and whether this focus on the customer extends itself to Gap’s in-store experience.

No news here that loyalty programs work. Almost table stakes at this point. But it has been two decades since Gap was brilliant at marketing basics as “cool.” The “Swing” campaign was Gap’s high point. We are all still waiting for their second act. Neil Saunders nails it. Gap needs to offer a product solution pronto. They used to be brilliant at managing and flowing color. What happened to that?

Oh how we long to solve the mystery of loyalty! To love and be loved. But alas, when there’s money involved it cannot be.

Even in marriage vows of loyalty there’s been a longstanding effort to take money out of the equation with the phrase “for richer or poorer.” We know how well that’s worked out. In retail reality the loyalty vow includes “’til a better sale doth us part.”

As the saying goes, “all talk, no action.” Loyalty is a misguided Band-Aid designed to stoke stock prices rather than face the decade-old truth of lack of product innovation. Amazing how Gap leadership allowed the Gap brand to be destroyed over a decade. It has to be very political within the Gap organization to allow slow-motion destruction of the brand.

This has become a recurrent question here on RW: “Will (xxx)’s new “Reward Program” give them an advantage?”

In the case of GAP, et al. the truth is well known: fashions that aren’t in fashion — or for whatever reason don’t sell like they used to — and too many stores. An incentive plan might make marginal improvements, though I saw nothing here particularly exciting. The concern of avoiding “run-of-the-mill” notwithstanding, but the underlying issues remain.

It’s nice to see Gap’s positive KPI for new loyalty members, but the ultimate business metrics they need to impact is sales, and unless their assortment radically improves, it will continue its downward trend.

Expanding Gap’s Bright Rewards program chain wide is a no-brainer. A loyalty program is a minimum customer expectation and apparel retailers that don’t have them are at a disadvantage.

Braintrust
"Gap would be wise to take a cue from those aforementioned consumer direct brands–it’s about long term relationship management and customer recognition. "

"As the saying goes, “all talk, no action.” Loyalty is a misguided Band-Aid designed to stoke stock prices rather than face the decade-old truth of lack of product innovation."

"I’ve never seen anyone say the reason they don’t shop at Gap is rewards. Fix the product and store design and you fix a wealth of problems."