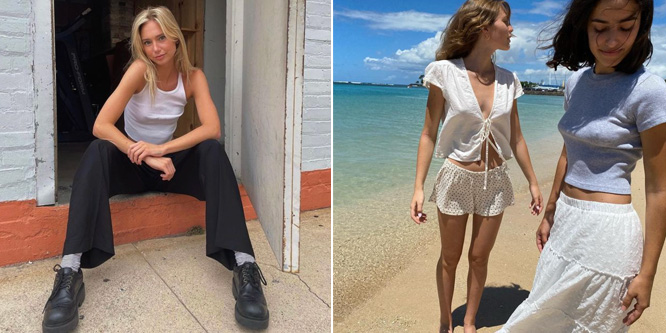 Brandy Melville is a hot contemporary casual clothing retailer that caters to Gen Z female consumers who spend hours on TikTok and are fashion conscious.

The fast-fashion retailer with stores in 14 states and Washington, D.C. has an even greater reach online with its digital native customer base. The vast majority of items it sells are priced at below $40 and come in just a single size (small), which runs contrary to the trend of more inclusive sizing and pricing at retail.

The company, according to current and former employees, has a dark side that could dramatically change how it is viewed in the U.S. and in some of the 12 markets in Asia, Europe the Middle East and North America where it also does business.

Business Insider recently interviewed more than 30 current and former employees of the company who described an atmosphere created by CEO Stephan Marsan that is hostile to associates who were not pretty, thin, young and white. The report also said Brandy Melville’s CEO also has a preference for blonde associates over those with darker hair.

Luca Rotondo, a former senior vice president at Brandy Melville, said that Mr. Marsan would demand that sales associates and managers be fired if they did not fit his ideal.

“If she was Black, if she was fat … he didn’t want them in the store,” said Mr. Rotondo, who claims he was ordered by Mr. Marsan to fire hundreds of workers for illegitimate reasons.

Two lawsuits to date have been filed against the company by former employees, including Mr. Rotondo, alleging that they were let go after refusing to fire workers based on their skin color or physical attractiveness.

Bastiat USA, which operates Brandy Melville stores in the U.S., has dismissed the allegations made against the company.

The accusations made against Brandy Melville appear similar to those that took Abercrombie & Fitch years from which to rebound.

Mike Jeffries, who is widely credited with the rise of Abercrombie & Fitch in the 1990’s and subsequently blamed for the chain’s diminished relevance with younger consumers, stepped down as CEO in 2014. He was widely criticised for his emphasis on hiring employees who fit A&F’s “beautiful people” culture that included referring to store associates as models.

DISCUSSION QUESTIONS: How do you expect consumers who have purchased goods from Brandy Melville to react to the news about its alleged hiring and employment practices around age, attractiveness, race and size? What should Brandy Melville do if the allegations are largely correct and what should it do if they are not?

Please practice The RetailWire Golden Rule when submitting your comments.
Braintrust
"We've seen this movie. It does not end well -- for anybody."

"One can infer that the current client base identifies – more or less openly – with the alleged bias of senior leadership."

"This is more like the nail in the coffin, rather than the beginning of the end."

In this environment, this stance is a death knell. How a retailer in this day and age is so tone deaf is actually really surprising. Don’t forget American Apparel and their toxic CEO – that company is gone. The only path forward IMO is to remove the CEO and start over.

We’ve seen this movie. It does not end well — for anybody. A retailer can of course target and pursue any market opportunity they choose to focus on. And there are a lot more avenues to talk to that market than ever before. And then the consumer, employees and the general public have the same opportunity to talk back.

The allegations made against Brandy Melville are extremely concerning and distasteful. By rights, they should put people off from using the brand. However while some customers may walk away, many others will not. We have been here time and again with various scandals and issues of injustice: even those who say they disagree with the way a brand is behaving don’t always follow through with their wallets.

This doesn’t look good at all. These allegations are serious, and their happening at the founder/CEO level puts the whole operation in question. They got away for a long time with subtle discrimination, carrying only one size for women at 25 waist size. The story is well researched, the allegations are serious, abhorrent and most likely the allegations will be found out to be true. If Brandy Melville is serious about it, and has a strong board and external investors, we can expect some action like Uber and many others in similar situations have taken.

On the other hand, it is possible that they will be tone deaf and just do enough to stay out of legal trouble, and try to be a counter-cultural phenomenon. Based on the early response from the company, one cannot rule out that strategy. There is always a segment of customers for that positioning too.

The clock is ticking for brands like this. Brandy Melville will follow a similar path of irrelevancy to the one Abercrombie and Victoria’s Secret went down. It will take a serious C-suite clean-out and reinvention to come back from this. There’s very little tolerance these days for this type of brand values, or lack thereof.

Wow – if true, this they need to rid themselves of the senior leadership, retrench, apologize (even if not true), and think about how to create a path forward (if there can be a path forward).

Yikes. Today’s younger consumers are color-blind and welcome diversity. Brandy Melville would do well to get ahead of this immediately before its customer mutiny.

Rumors have long been flying around Brandy Melville for exactly the accusations described here. One thing I will say – Gen Z is by no means a monolith. BM’s positioning had already significantly limited their market to a small subset of Gen Z. As awareness of the toxicity behind the scenes grows, I think it will limit it more – but a lot of Gen Z had already rejected the brand. This is more like the nail in the coffin, rather than the beginning of the end.

If they continue this practice, it will be necessary to defend multiple lawsuits well into the future.

We’ve seen this play out before – remember American Apparel? At a minimum this will result in the removing of the current CEO. At worst, it will cause a downfall in sales by consumers who have shown the world there is no tolerance for this behavior. For the brand to survive they’ll need a new CEO, and a dramatic reinvention.

First, let me say I agree with my fellow BrainTrusters — at least in principle. If these allegations are true, top management should be removed instantly — period, full stop. BUT, all the predictions of Gen Z Brandy Melville loyalistas rising up in revolt over these policies miss one critical point. The same consumers folks expected to boycott the brand are already purchasing products from a company that sells only one size (small) to begin with and whose models are heroin chic thin, blonde, and white. So a savvy shopper would have already figured out what the brand thinks of people who aren’t thin, aren’t blonde, aren’t young, and aren’t white. All the examples cited in this discussion are useful but none of the companies mentioned only sold one size. One can infer that the current client base identifies – more or less openly – with the alleged bias of senior leadership.

Georganne, it would be really interesting to understand why the brand appealed to Gen Zers in the first place since it doesn’t exactly hide its biases.

I wonder how many of Brandy Melville’s customers view it as more than another store at the mall that sells inexpensive apparel? I clicked around Twitter and TikTok and there are many recent posts that talk about purchases made at Brandy Melville. There are also plenty of TikToks making fun of shopping at the stores and the sales associates who work there. News of its practices isn’t new, but the Business Insider article is behind a pay wall so it could take a while to trickle down to shoppers. Then again, you did point out that a segment of Gen Z still shops there despite the sizing and lack of diversity. We’ll just have to wait and see!

The very definition of a null set: the intersection of “consumers who spend hours on TikTok and are fashion conscious” and people who read “Business Insider.”

Braintrust
"We've seen this movie. It does not end well -- for anybody."

"One can infer that the current client base identifies – more or less openly – with the alleged bias of senior leadership."

"This is more like the nail in the coffin, rather than the beginning of the end."