Will ‘hat-heads’ go for limited edition drops at Lids? 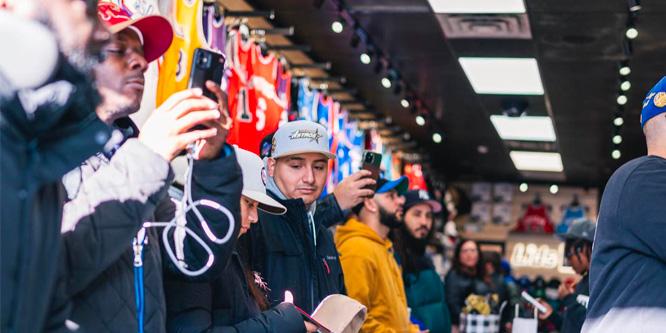 The store, opened in Jamaica, Queens, New York City, is a brick-and-mortar adaptation of the brand’s LidsHatDrop.com website which launched earlier this year, according to a press release. At 11:00 a.m. each Friday, the store will make exclusive new releases available only in-store until noon when the collection goes on sale on the e-commerce website. The collections will be created in collaboration with athletes, celebrities and designers.

“Drops” of limited-edition products have become popular in other collector-driven areas of fashion, most notably sneakers. Nike, for instance, offers streetwear fans and collectors high-demand sneakers on the first day of their release through the brand’s SNKRS app, and announces and hypes the products on social media. New products move so fast that the app only allows users to keep them in their online carts briefly before they are released for others to purchase.

Retailers in other verticals have experimented with similar drops. Luxury brands Givenchy, Moncler, Balenciaga, Fendi and Burberry all began running drop-style promotions a few years ago, resulting in large crowds for their physical stores. And even Macy’s got in on the act at one point with a 2018 drop of an exclusive watch. Though the practice has proven popular and consistently successful in streetwear, experts have cautioned that the practice may not work in segments with less of an engaged collector market.

Lids was having a rough time early in the pandemic, when its dual reliance on physical retail and live sports made it particularly vulnerable to disruption from shutdowns, according to Axios. The brand was forced to lay off almost all of its 8,500-person workforce nationwide.

One year later, though, the brand was back in expansion mode, launching localized store-within-a-store concepts in DSW and The Shoe Company. In doing so it added 70 stores to its 1,200 existing North American locations, according to Yahoo.

DISCUSSION QUESTIONS: Do you see similar concepts to Lids Hat Drop being operated successfully in other areas of retail? What are the keys to making this type of limited-edition strategy successful?

Please practice The RetailWire Golden Rule when submitting your comments.
Braintrust
"Forget about influencers, get going on that 'drop' calendar!"

"Drops allow consumers to put a personal spin on their own style."

"The Hat Drop initiative will be successful because of the demographic and culture at Lids."

14 Comments on "Will ‘hat-heads’ go for limited edition drops at Lids?"

When you conduct business in a category such as hats for all sports, and of all themes, colors and sizes, and they are authorized products, you can expect a large following to gobble up the products and gain bragging rights. It will be good for Lids, as it would be good for most retailers in categories with similar characteristics as sports hats.

Hopefully, we all learned a lesson from the sneaker and Supreme drops of the last few years: they work. It’s an excellent idea; creates a buzz that day that everyone notices, gives the feeling of scarcity (to me, one of the most crucial merchandising techniques of the century) and releases word of mouth, that rare and wonderful top of the marketing chain endorsement. Forget about influencers, get going on that “drop” calendar!

Or work those influencers into that drop calendar because they will drive traffic and sales!

The strategy of scarcity and exclusivity, which Lids is using with their Hat Drop store, is a viable strategy across multiple categories. The keys to success include some level of affiliation with someone who would be considered cutting edge, and authenticity in terms of the scarcity and limited time. This approach should be viable across fashion and related industries, or any industry where a design element can be introduced.

Create and manage scarcity…!!! “Limited edition” is potentially one of the most powerful tools available in creating buy-now demand. FOMO for the customer. Sell-through and high maintained margin for the brand or retailer. It’s a total head-scratcher to me that this tactic is not more broadly utilized.

This is a great strategy for Lids. Their customers crave newness and collectibles, I am pretty confident that this will do very well.

Limited editions, exclusive designers and brands can be incredibly successful with the right strategies and plans. I was fortunate enough to watch this designer partnership phenomenon while I was at Target, starting with Michael Graves. When you’re selling a product with an enthusiastic fan group, like Lids, this kind of expansion can keep a commodity-like product, (baseball hats) really fresh and send hat enthusiasts scrambling to get the latest product drop.

Based on the locations they opened for their brick-and-mortar, they likely found high concentrations of customers within Jamaica, Queens, and NYC, with their e-commerce launch of these exclusive hats. This is a perfect example of how online and brick-and-mortar can help shape new concepts for expansion and growth for retailers.

This is a great, fun idea. Others have covered the general appeal of scarcity and limited edition drops – which I fully agree with. But younger consumers — Millennials, and Gen Z in particular, are looking for ways to be unique, and yet still “fit in” in some capacity. Drops allow consumers to put a personal spin on their own style.

It works for sneakers, why shouldn’t it work for hats? The keys are to pick a category with fanatics, collectors, trend slaves, etc. and then not drop a store on every corner. This is scarcity marketing at its finest. Cast your net too far and it will immediately develop big holes.

Hats have a unique collectible appeal. So these hat drops make tremendous sense. Yet why a store specializing only in these drops? It doesn’t make sense. Were they building a section in each existing store I’d be strongly in favor – using unique merchandise to build traffic is an excellent approach. But a unique store doesn’t seem to have the corporate power they’ll want from this unique idea.

I think this is already happening in the “sneaker” category. I thought that was a unique, small, fad until I was made aware of the fact that thousands of people go to shoe trading conventions.

There are no “keys” here — you need to be a merchant fortunate enough to be in a category that lends itself to exclusive offers. OR you can “create” uniqueness by offering something “special” prior to it being trendy. Dress socks of the week, for example.

I am probably not very well positioned to comment, because I cannot imagine having a closet full of baseball hats and sneakers, but I could not help myself here. I had to weigh in.

The Hat Drop initiative will be successful because of the demographic and culture at Lids. The drop concept continues to be successful for specific markets. Collabs or drops with larger retailers can be hit or miss, as collectors define what they do and do not want.

I don’t get it. But I have a good friend who never saw a baseball hat he didn’t want to buy. He has two Hefty trash bags full. He says he will leave them to his granddaughters when he passes. He buys his Yankee game tickets based on the bobblehead giveaway.

From a business POV, this is ideal. The retailer creates scarcity which often equals desire and premium pricing. The inventory will not likely get stale. What is not to like?

There is one thing better. I am wearing a pair of Nikes which I designed myself. When I buy the next pair, I will do it again.

Creating demand is the key when it comes to launching drops. I believe influencer marketing can definitely aid in generating excitement around new launches. Brands offering drops need to make sure that they offer customers unique assortments, however ensuring this on every launch is not easy. Therefore, Lids Hat Drop’s strategy to launch new drops every week can be tricky. Additionally, retailers can also implement a pre-order strategy for their new style items. Accepting pre-orders will allow them to cash in on products that haven’t been launched yet, while also building hype.

Braintrust
"Forget about influencers, get going on that 'drop' calendar!"

"Drops allow consumers to put a personal spin on their own style."

"The Hat Drop initiative will be successful because of the demographic and culture at Lids."