Will higher pay and training put more drivers behind the wheel for Walmart? 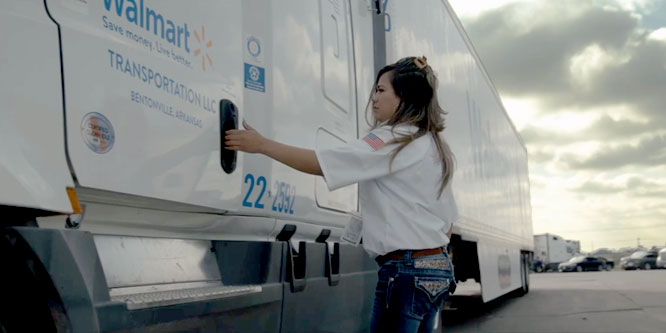 There’s a trucker shortage out there and Walmart is looking to avoid being part of it. The retailer announced that it is increasing pay for its fleet drivers and has launched a new program that will enable people working in its supply chain operations to become drivers themselves.

The retailer, which has about 12,000 truckers as part of its fleet, said that its drivers can now earn up to $110,000 in their first year with the company. Drivers who stay with the company can earn more based on their time on the job and where they are located.

Walmart has gained high marks for its Live Better U educational program that covers the cost of college tuition and books for associates enrolled in the program. It also covers upskill training at the chain’s Walmart Academies across the country. The retailer is doing something similar with its truckers, as well. Supply chain associates working in Dallas and Dover, DE, enrolled in the Walmart Private Fleet Development Program and went through a 12-week program to earn their commercial driver’s licenses (CDL).

“Fortunately, we have some of the best in the business already employed: the established drivers of our Private Fleet,” the two wrote. “Now with another title as Certified Driver Trainers, they turned their attention to training a new generation of associates in our values of safety, courtesy and pride. After completing specialized training in the Walmart Academies, they began working with trainees — teaching written material and, of course, overseeing the actual driving.”

Walmart, like other retailers, is operating in a market short on drivers. The American Trucking Associations (ATA) estimates that the U.S. needs 80,000 more drivers than it presently has to handle its current level of deliveries. That number, according to the ATA, will likely double as the hardships of the job and demographics work against efforts to fill open slots. The vast majority of drivers are older and male. Sixty percent of new over-the-road drivers are 40 or older. Only seven percent of all drivers are female.

DISCUSSION QUESTIONS: Will higher pay coupled with Walmart’s Private Fleet Development Program give the retailer an edge over retail rivals in addressing trucker shortages? Do you expect other large retailers to mimic Walmart?

Please practice The RetailWire Golden Rule when submitting your comments.
Braintrust
"This major commitment to attract and retain as many drivers as possible is another reason Walmart has very few real competitors left."

"I learned (on John Oliver’s show) that truckers don’t get paid while they wait for a load at the docks. That’s pretty lame."

"Paying people a fair wage is good. Recognizing their humanity is even better."

9 Comments on "Will higher pay and training put more drivers behind the wheel for Walmart?"

Higher pay and training for new truck drivers is a smart strategy to help Walmart attract more drivers. With a starting pay of $110,000 for truck drivers, it should help Walmart expand its base of drivers. With worker shortages across all areas of retail, it is forcing brands to find creative ways to offer more benefits and incentives.

I applaud this move by Walmart to pay a living wage and believe this will give them an edge. Driving a truck was a way many people made a decent living but over the last 20 years the paycheck for these drivers has shrunk to a level where drivers are seeking employment elsewhere. Others will follow Walmart’s lead but they have a head start with a creative package that should draw drivers into the fold.

Giving existing drivers the opportunity to train new drivers is brilliant in every way, too. This major commitment to attract and retain as many drivers as possible is another reason Walmart has very few real competitors left.

This is a great move. Not too long ago we discussed the problems encountered by truck drivers; the high turnover, low pay, and significant shortages. It is not a retail problem, it is a problem that hurts the national economy.

Walmart is seeing the disincentive of being a trucker and understanding the needs of both the individuals and the company and is taking it head-on.

Strategically, I would not be surprised if Walmart will significantly increase its backhaul opportunities with an expanded fleet and well-paid drivers.

As far as other retailers go, few have the critical mass to execute such a complete freight program. This plan is certainly a competitive tool for Walmart.

Walmart’s strategy is on point and exactly what the industry needs. Living wages and an edge over other retailers will keep Walmart at the top – helping retain and recruit the best in class. Investing in employee training will boost moral and other retailers will need to follow the example.

Yes, I think that’s a good idea. I learned (on John Oliver’s show) that truckers don’t get paid while they wait for a load at the docks. That’s pretty lame. Hopefully, the extra pay will make this worth their while.

It’s a good start but it doesn’t address most of the reasons truckers leave the industry. It’s driving hours, “down time” pay, living conditions on the road, etc. Paying people a fair wage is good. Recognizing their humanity is even better.

Higher pay helps but it’s the other perks, such as training and educational benefits, that get many employees excited to work at a company. Employees want growth. Personal development is every bit as important as corporate training (or driver training) to give employees a feeling of enrichment.

Momentarily, and yes … of course. We so often hear how Walmart is the nadir of places to work for — largely based on lowly paid store workers — but I don’t have trouble believing that in many backroom and support positions they may pay quite well (you don’t become the world’s largest retailer by hiring dullards!). That seems to be the case here (though I imagine the up to part of it carries a lot of caveats).

Braintrust
"This major commitment to attract and retain as many drivers as possible is another reason Walmart has very few real competitors left."

"I learned (on John Oliver’s show) that truckers don’t get paid while they wait for a load at the docks. That’s pretty lame."

"Paying people a fair wage is good. Recognizing their humanity is even better."