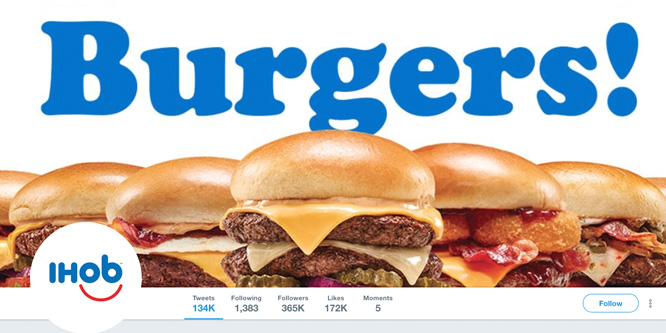 IHOP, the company formerly known as the International House of Pancakes, created a lot of attention for itself when it tweeted last week that it was considering a name change to IHOb. Given its long association with pancakes, many assumed the “b” would stand for breakfast. That was before the company announced that the “b” was for burgers. Social media blew up in bewilderment and bluster.

It now appears as though IHOP’s name change was simply a marketing move as it began promoting its new Ultimate Steakburgers on Monday. In a spot to promote the burgers, an actor on the rooftop of a restaurant proclaims that the chain has “gone from pancakin’ pancakes to burgering burgers” and that the new menu addition is so great that it requires a name change for the chain.

IHOP’s name change may have caught the attention of chains more associated with burgers, but they’re not letting on publicly that they are concerned over the development. When a Twitter user asked Wendy’s what it planned to do, the burger chain tweeted that it was “Not really afraid of the burgers from a place that decided pancakes were too hard.”

The real question is what IHOP’s marketing campaign will do for its brand positioning and sales in both the short and long-term?

The IHOb campaign has certainly generated a lot of press coverage, and the Twitter page set up for the concept has 365,000 followers.

Rosalind Chow, an associate professor of organizational behavior and theory at Carnegie Mellon’s Tepper School of Business, told CNBC, that IHOP is “trying to move into the lunch/dinner category, but that means that it will now have to blur its identity as a breakfast place.”

She said in doing so, IHOP may “risk losing clientele who valued your old identity and not attracting new clientele with your new identity.”

DISCUSSION QUESTIONS: Will IHOP’s IHOb campaign to support its Ultimate Steakburger launch help the chain gain share of the lunch market? What do you see as the up and downsides to IHOP’s approach?

Please practice The RetailWire Golden Rule when submitting your comments.
Braintrust
"The question is whether the goal of more dinner business is sustainable, given IHOP's brand equity and the crowded space it’s trying to elbow into."

"I personally think the IHOP campaign was a home run! It did exactly what they hoped for — resulted in massive social sharing!"

21 Comments on "Will IHOP’s burger buzz translate into sales?"

Wendy’s wins for best quote. This kind of radical change comes up jarring, whether it was Kmart’s “ship your pants” or Ron Johnson‘s tenure at J.C. Penney. Mark my words, this will be the “New Coke” of 2018.

IHOP’s campaign certainly generated a lot of coverage and comment. In that regard, they secured maximum publicity for the launch of their burger offer. I am sure that, in the short-term, this will help to generate sales. The acid test, however, is longer-term sales. Given how crowded the burger market is and given that IHOP is not naturally associated with the product, these may be harder to generate.

It was a very smart campaign — it’s hard to buy that kind of attention. Can they shake or damage their reputation as a breakfast place with just this one effort? It’s doubtful. Will they take a big share of the already crowded sit-down burger market? Also doubtful. But will they drive a lot of people into the restaurant to try them out? Probably yes. So marketing really has done their job to drive traffic to the stores. Will they convert some of that breakfast traffic to lunch? Well, that all depends on the burger doesn’t it?

In a land where seemingly every restaurant has a signature burger, are consumers going to think IHOP when a burger is on their minds? Remember when Applebee’s wanted to move to a more hip menu? IHOP needs to tread carefully and not lose sight of its core audience.

What comes to mind is the failed “Where’s Herb” campaign that years ago cost Burger King significant dollars. It did nothing for business. With the IHOP/IHOb campaign, I see at first what they wanted — media coverage — and they got it. However, customers are confused. “Are they changing their name for real?” will be what customers will ask. Moreover, because pancakes are their trademark, the customer is not going to think burgers when it comes to IHOP. There are so many other ways they could have done a successful campaign to introduce their new burger menu but, in my opinion, this is not it. Businesses should never mess with their name especially at a time like today when there is so much competition. Brand identity is important and when you mess with that, you’re causing serious damage to your business even if you get that short-term media recognition. Long-term, people will forget, leaving the company with bad memories of their marketing program like “Where’s Herb.”

Quick — somebody break it to IHOP that Five Guys, Shake Shack, Red Robin, TGI Fridays, In-N-Out, Burger King, Smashburger and a host of others have already beaten them to it. Bob Phibbs is right — New Coke, indeed.

Burgers are the most popular sandwich in the U.S. and more than 300,000,000 sandwiches are eaten daily. IHOP (just can’t bring myself to fall into their marketing trap) is moving into a broader category than breakfast. There’s no question the campaign will increase IHOP’s share of the lunch market, given that they have not had truly viable options there or marketed outside of breakfast. The real question is, how much will it benefit them and how much share will they gain? And the downside? They lose focus and turn off their existing customers.

Arm waving to declare “us too” will generate the new traffic that IHOP seeks, if they can reach a wide enough audience and tell the story of it being a better visit experience and not just a larger menu.

Let me start off by saying that I am and have been a big fan of IHOP breakfasts for decades. It’s easy to criticize and we know that initial value creation comes not from tweaking existing models but from initiating new ones. So kudos for the bold step. Yet, this move by IHOP may suffer from the “grass is greener syndrome.” Rather than further differentiating their current branding by improving the food quality, menu and service of the all-day breakfast experience, the company chooses to move into the burger arena. This is a high-stakes move that either reveals an inherent macro-weakness in the breakfast market or an extremely attractive menu/daypart combination that IHOP just could not dismiss. Will the new focus dilute the quality of the breakfast menu? Will operational execution in restaurants suffer? Will existing patrons try the burger options? Will the campaign attract and sustain new customers? Lots of questions that will only be answered over time and by how well the company adapts to how consumers respond to this new strategy.
4
|
0
-   Share

Neil hit the nail on the head — plenty of PR, plenty of raised awareness of IHOP’s burger offerings, potentially some trial. The question is whether the goal of more dinner business is sustainable, given IHOP’s brand equity and the crowded space it’s trying to elbow into — including its corporate cousin Applebee’s.

What the campaign did is create additional awareness of IHOP. There was a wealth of articles, news reports, etc. that showed most people didn’t know what IHOP meant. They may still not know but the brand got publicity far beyond the cost of the campaign as evidenced by its being a topic for today’s discussions. Will it help them sell more burgers? That is yet to be determined.

It’s a reminder that IHOP is open for lunch and dinner too – I don’t think they are re-focusing the company or their breakfast offerings. We may not need to over-analyze this unless they are stupid enough to actually change the name. Then we should let them have it with both barrels.

IHOP has done a great job letting the consumer know that they are in the burger business but have done a terrible job of defining why their burger is better than the others — its value offering. Maybe that’s phase two of their campaign?

Take out your gun. Aim it at your foot and see how many toes you can blow off. This move will get the entire foot award. Whoever is responsible for this strategic decision should be taken to the woodshed. Weaken your core brand message that you’ve spent years and millions establishing. Enter a crowded segment with a me-too offering while still staying tethered to the original core. YIKES! I’m with Bob Phibbs on this one. Kudos to their marketing department for all the buzz generated. It sure will make the splash bigger when this one hits the tank.

I personally think the IHOP campaign was a home run! It did exactly what they hoped for — resulted in massive social sharing! Forget about the burgers, this was larger than any burger! This was about making a comeback and letting everyone know IHOP is still a player! I’m going to get some pancakes!

As for attracting attention: mission accomplished! But at the same time the source of the stir — “but you’re a pancake place” — points out just how hard it will be to get people to think along new lines. And I’m not sure how good an idea it would be anyway. Giving up (what I presume is) dominance in the breakfast field in order to enter the already overcrowded lunch field seems like a Pyrrhic Victory.

Well, it caught everyone’s attention. If I were a betting man, I might bet that a year from now the name will still be IHOP (and many years after). In the meantime, they are loving the publicity.

Oh, I guess some folks thought they were actually going to change the name. It never even dawned on me that they were seriously changing it.

Realistically, I can’t see them alienating their breakfast base with a marketing campaign. Is anybody going to say, “I used to love their breakfast, but now that they’re serving burgers there’s no way I’m going back!”? They are trying to expand their customer base and I applaud their bold approach to marketing it. I’m assuming they will continue to serve breakfast all day, so it’s also a strong option for a group divided on whether they want breakfast or burgers.

I think it is like a lot of politics coming out of Washington right now. Confuse and try to hold the news angle. I don’t think that’s the sound marketing strategy for any brand.

Going after the lunch and dinner trade is a sound objective. Chain restaurants need to drive max revenue at every day part. Why do you think McDonald’s went after the breakfast trade so vigorously after its Egg McMuffin hit in 1972?

But burgers are an already over-crowded category with little opportunity for differentiation. After the present amusing “internet outrage” subsides, it will be hard to build share in a sustained way.

Far better, I think, to promote fast service during the lunch period and “Breakfast for Dinner” with gourmet omelettes and maybe a few other creative menu additions.

Braintrust
"The question is whether the goal of more dinner business is sustainable, given IHOP's brand equity and the crowded space it’s trying to elbow into."

"I personally think the IHOP campaign was a home run! It did exactly what they hoped for — resulted in massive social sharing!"