Will limited-edition exclusives become the next big thing in grocery? 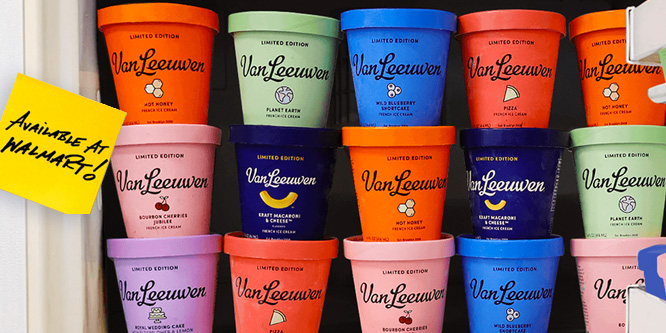 Walmart has scored an exclusive deal on seven new flavors of ice cream from Van Leeuwen Ice Cream, including Kraft Macaroni & Cheese. The flavors will rotate at 3,500 U.S. locations over a 10-week period.

In July 2021, Kraft partnered with Brooklyn-based Van Leeuwen to produce an ice cream version of its signature Macaroni & Cheese. The limited-edition variant led to loud objections from ice cream purists across social media, but the 6,000 pints sold out online within an hour.

The macaroni flavor returned in August in another limited-run, but the Walmart collaboration marks the first time the flavor is reaching stores. The other six ice cream flavors coming to Walmart over the 10-week run are Planet Earth, Pizza, Hot Honey, Royal Wedding Cake, Bourbon Cherries Jubilee and Wild Blueberry Shortcake.

This is the first exclusive rotation that Van Leeuwen is bringing to Walmart stores. It has plans to refresh the flavors later in the summer.

The collaboration takes a page from the “drop culture” trend pioneered in the streetwear category in the U.S. by Supreme and Nike. Hyped on social media, the limited-edition apparel and footwear releases often sell out immediately. Nordstrom, Macy’s and Target are among retailers known for their limited-time fashion capsules, but so far limited-edition exclusives have been a bigger sales opportunity in fashion than food.

Among other limited-edition collaborations between retailers and food/beverage brands:

DISCUSSION QUESTIONS: Does Walmart’s exclusive partnership with Van Leeuwen Ice Cream point to a bigger opportunity for grocers around limited-edition offerings? Why don’t limited-edition exclusive products in grocery seem to resonate as much as fashion item drops?

Please practice The RetailWire Golden Rule when submitting your comments.
Braintrust
"'Limited edition' as a strategic weapon and as a marketing tool is one of the most powerful assets available to a brand or retailer."

19 Comments on "Will limited-edition exclusives become the next big thing in grocery?"

Kraft Macaroni & Cheese ice cream? Ewwww. I’m in! Where do I sign up?

The answer to the question, why don’t limited-edition exclusive in grocery resonate as much as fashion items, seems like an easy one. The hype around limited edition fashion is huge. Is there hype around food items? Because if there is, sadly, I have missed it.

Georganne, I remember long ago, when the big deal was a new, weird Oreo or Pop-Tart on the shelf. Then it became there was a new flavor each month. The newness wore off. By they way, you can have my serving of mac and cheese ice cream.

Come on, you have to try it! At least new flavors of Oreos make it into the mainstream narrative.

Ever eaten cold mac and cheese? I’m intrigued as well. As for the food hype — didn’t everyone run out to their nearest grocery to score Lady Gaga Chromatica Oreos? #Guilty #FanGirl

Yep. I also admit that I look forward every year to the arrival of Cadbury Cream Eggs and am sad when their time on store shelves ends.

I think Tractor Supply may sell them year round. They have a pretty robust candy assortment!

A limited-edition grocery item is not, unlike a fashion piece, something with which one can make others notice, or about which one can brag after it’s been consumed. It serves a better purpose for CPG manufacturers and retailers to test a product or a market.

Limited edition exclusives in grocery will remain important, however the expectations should be lower than in other retail segments such as fashion. In fashion all of the customers expect change and new products. The challenges that limited edition exclusives face in grocery include that the customer is often shopping for her family, not herself, and she is often shopping with a budget that does not allow for waste. The consumer who is not shopping for a family, or has more flexibility in their budget is much more likely to indulge in the new unproven items. This is the consumer segment that is going to expect the opportunity to have new and exciting products.

“Limited edition” as a strategic weapon and as a marketing tool is one of the most powerful assets available to a brand or retailer. It’s also one of the most under-utilized. Limited edition is a powerful incentive to buy now and buy at full price. I am continually amazed that it is not used more often by more brands and retailers. There is always the danger that it will be overused and abused, much like the word “sale.” But if executed with integrity it can be a very powerful tool, across many product categories.

Limited edition items in grocery are a double-edged sword. They create interest and are great for marketing hype. However grocery, unlike fashion apparel, depends on frequency. Grocery customers are not very tolerant of frequent changing of assortments and layouts in the store. Shoppers develop patterns, they discover their favorite items and they like to find them in same place every week when they shop. Mess with that, in my experience, and they get grouchy.

For Walmart, in this example, if they can keep the location of this changing assortment consistent and clearly communicate that items will be rotated over time, it might be fun for the customer. Obviously they should also have a process for adding really popular items to their regular assortments, should something really take off.

The Van Leeuwen collaboration is serving two purposes; bringing variety and buzz while also lending a higher-end brand recognition to Walmart. Other food items like Lay’s and Oreos have been doing limited runs, but VL is a more trendy targeted play. Walmart is already the authority in grocery, so it’s smart to infuse some brand buzz into this area to highlight its range while also expanding the fashion portfolio with its new creative director, Brandon Maxwell.

Limited edition food items have been around a while. Look at Frito-Lay with its limited edition, consumer-led flavored chips. They’d hit the shelves and last for about eight weeks and then a new flavor combo would drop. They’ve been extremely successful with this innovation rotation for many years and it has led to a few of the highly popular flavors making it into their regular lineup, think sour cream (love those, BTW!). There is a big difference though — fashion is something that you can wear over and over and show off to your friends and family. Can’t do that so much with food. It’s a “one and done” thing.

Walmart’s collaboration with Van Leeuwen ice cream represents a way to attract customers and drive sales with exclusive and limited-time offerings. While limited time and exclusive grocery product drops may not resonate as much as a fashion drop, this kind of collaboration is a creative way of drawing interest and brand awareness.

Limited-edition, like seasonal merchandise, breaks up routine shopping behaviors and creates some excitement. For grocery, it could be treated as a boutique area similar to Target’s swing shops. I see an opportunity for CPG brands to bring in some of their international products. For example Lay’s Kobe Steak Flavor from Taiwan fetches about $8 a bag at a NYC shop called Motherland Exotics. Why not feature it in U.S. grocery?

First of all let me go on the record as saying that mac and cheese ice cream and Swedish Fish Oreos will never pass my lips. Sounds like the end of civilization to me. That said, what’s new here? Ben & Jerry’s has made several fortunes on limited availability ice creams. So Walmart and Van Leeuwen’s partnership isn’t exactly blazing new ground in the category — unless you consider marketing flavors and form factors that probably shouldn’t be combined in the first place new ground. Will it work? Why not, it has for decades now.

Outside of predictable seasonal item promotions, grocers have not done a great job developing or partnering to offer LTOs. And when they do have these types of specials, they don’t do a great job promoting them. Grocers would be smart to identify compelling products and campaigns to drive frequency, traffic and margin.

The choice of limited edition flavors aside, the concept of exclusive brands has real market differential potential. These brands give consumers permission to bypass their normal “go-to” store in search of exclusive/limited edition brands.

Braintrust
"'Limited edition' as a strategic weapon and as a marketing tool is one of the most powerful assets available to a brand or retailer."