Will Macy’s be thankful it brought back its parade this year? 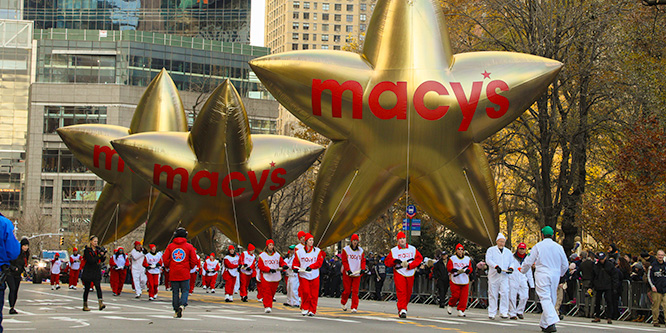 The Macy’s 2020 Thanksgiving Day Parade, like plenty of celebrations worldwide, was scaled down significantly. This year New York City is preparing for the return of the event and a crowd of spectators to watch in person.

In a statement, New York City Mayor Bill de Blasio said that the Macy’s Thanksgiving Day Parade will be returning in its full form this year, ABC News reported.

In 2020, the threat of spreading the novel coronavirus — for which there was not yet a vaccine — forced the city to confine the parade to the area immediately surrounding the Macy’s Herald Square flagship location. This year, organizers will have COVID-19 mitigation measures in place, such as requiring parade volunteers and staff members to be vaccinated against COVID-19 and show proof of vaccination. Face coverings will also be required, with the exception of some performers.

Mr. de Blasio expressed hope during a press briefing that holding the event could represent a comeback moment for the city, the New York Post reported.

The rerouting of the parade in 2020 was hardly the only setback that Macy’s experienced due to the pandemic.

In addition to the shutdowns nationwide that affected most or all apparel retailers, the chain had to modify other iconic seasonal offerings specifically available at its flagship stores. In December of 2020, Macy’s removed people in Santa Claus costumes from its Herald Square store as well its Chicago and San Francisco locations. The popular attraction, which reportedly pulls in a quarter of a million customers each Christmas season, had been in place every year since 1861. Macy’s replaced it with online interactive experiences.

Though Macy’s is sometimes seen as mired in the murky middle of apparel retail and tethered to an antiquated shopping mall model, the chain has recently been reporting positive news.

In mid-August the retailer raised both its profit and sales outlook for 2021 after beating Q2 analyst expectations, according to  CNBC. The retailer says that its turnaround strategy is working and is bringing new, younger customers into Macy’s stores.

DISCUSSION QUESTIONS: Did Macy’s made-for-TV-only 2020 Thanksgiving Day Parade hurt the chain’s sales last year? Will the return of the full, live event have any impact on the public’s perception of the retailer and its sales during this year’s Christmas selling season?

Please practice The RetailWire Golden Rule when submitting your comments.
Braintrust
"I'm rooting for Macy's and I can't wait to see the floats and the oversized balloons in the heart of Manhattan."

12 Comments on "Will Macy’s be thankful it brought back its parade this year?"

Macy’s does a great job of the parade and I am pleased that the in-person version is being brought back this year. There is no doubt that the whole event is a fantastic marketing opportunity for Macy’s and I am sure that there is some benefit to sales – especially digitally. However there is a yawning great gap between the splendor of the parade – for which Macy’s pulls out all the stops – and the dismal, tatty Macy’s stores that most average consumers experience on a day-to-day basis. I have always found it shocking that a company that shows so much flair and imagination in organizing a parade cannot sprinkle at least some of that magic into its retail experience!

I walked the Rosedale Mall (Twin Cities) location this weekend and was gobsmacked by how threadbare the shelves were. It seriously looked like they’d had a going-out-of-business sale and somehow I snuck into the boarded-up building.

The return of the parade is about as big a signal as possible that it’s possible to have some kind of return to something resembling normal, albeit with precautions in place. It demonstrates that we can have and participate in the big seasonal events we enjoy so much if we just use a little common sense and follow the protocols that the science continues to suggest.

Great move. Symbols are important, and Macy’s has few positive symbols left. Either the chain recaptures some of the iconic status it once held with America or it atrophies. I don’t have a lot of hope for recovery, but the parade is about the spirit of the people as much as the brand. Do all the good you can in the time you have left Macy’s — and good luck.

The Macy’s Thanksgiving Day Parade – or as my family calls it the Macy’s Day Parade – is a beloved annual event and part of the fabric of American tradition. The fact that Macy’s was able to pull together a made for TV version in 2020 speaks to how important the parade is. Was it the same? Nope, but it happened and that’s important.

Moving forward with a full, live parade in 2021 shows consumers that whatever the media and Macy’s haters say, the retailer is still there for them. Will consumers reward Macy’s this holiday season? I think so, because despite messy suburban stores Macy’s gives back with events, coupons, and more not just during the holidays but all year round.

I don’t think you can prove a negative — that the absence of a “normal” parade hurt Macy’s business, which was bound to suffer in 2020 anyway — but the return of the full-blown event is certainly good news for both Macy’s and New York City.

And to reinforce Neil’s comment, the parade itself is part of Macy’s “Herald Square Syndrome.” Shoppers dazzled by the 34th Street experience continue to be disappointed by the Macy’s stores in their own backyards across the country.

Macy’s Thanksgiving Day Parade is an iconic event, and I’m glad to hear the company leadership is bringing it back full scale this year. The made-for-TV event just wasn’t the same. Importantly, I look at this American event in a similar manner as baseball and apple pie; it’s difficult to do without. Will the physical event help drive sales? In part, yes, but there are so many other factors to consider as well. I’m rooting for Macy’s and I can’t wait to see the floats and the oversized balloons in the heart of Manhattan.

The parade is a staple for Thanksgiving – it will be nice to have it back and hopefully it will signal the normality in the holiday season that we are looking for.

The most welcome sign of happiness during the holidays, the big parade. The public will receive an incredible boost with the big parade coming down the street. I think this will be the start of a great rebound for the company and the entire retail population. What more of a gift could Macy’s give all of us?

Great news! This is positive — however, it will take a lot more than this to bring the customers back. Most important, as I have said before, is there lack of ability to stop the brands they showcase so well, with dynamic display and aggressive advertising, to be sold in discount stores. This has been going on for years and never should have, but it is only getting worse. I was in TJX in Wellington, FL. This is clearly a B store. As you walk into the store, the first thing you see is hundreds of handbags, many styles from Michael Kors. Even if these styles are made for them, it is ridiculous — the bags were about $125. If you go into any Macy’s, you see a huge display of Michael Kors bags, displayed with major impact. The price is much higher, but that alone is not the issue. The label is compromised as it is in all price oriented chains. In Herald Square, the department is in the best location with a really… Read more »
0
|
0
-   Share

I doubt it makes — or made — much difference in sales for one particular year, but that misses the point: this is one of those (all too rare) “legacy” events that maintains a brand’s overall image.

Welcome Grogu™, and welcome back to all of last years non-invitees!

Braintrust
"I'm rooting for Macy's and I can't wait to see the floats and the oversized balloons in the heart of Manhattan."