Will marketers hit a home run or strike out with MLB’s uniform ads? 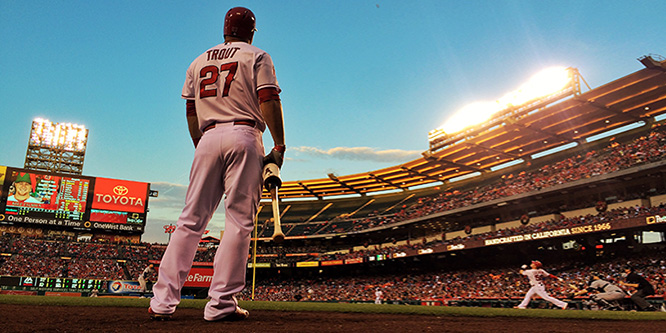 The sponsor’s logo will appear on the player’s sleeve.

“I think that jersey patches advertisements on jerseys are a reality of life in professional sports,” Commissioner Rob Manfred told the Baseball Writers’ Association of America last week. “That’s a revenue source that is significant enough that it is really impossible for the sport to ignore over the long haul.”

Nielsen found that an MLB sleeve sponsor would appear on camera almost three times as often and as long as an NBA jersey sponsor logo, which is displayed on the front of a team’s uniform. The Boston Red Sox just reached a $17-million per year jersey sponsorship deal with Mass Mutual, plus incentives.

Many traditionalists have long railed against commercialism creeping into America’s oldest organized sport that dates back to 1876. Some were upset when Nike’s swoosh logo began appearing on the chest of players’ uniforms in 2019 under a new sponsorship deal.

Paul Lukas, founder and editor of Uni Watch, a blog devoted to uniform design, told the New York Post in 2019, “A uniform isn’t like other products, or even like other pieces of apparel. It already stands for a brand — the brand of the team. It should never be cluttered up with other branding.”

Whether advertisements on NFL jerseys would be worth the clutter in order to reduce the number of commercials has been explored on blogs.

At a media event earlier this year, NFL Chief Revenue Officer Rennie Anderson said the league was exploring blockchain sponsorships to raise incremental revenue but had no plans for advertising on jerseys. “I can’t imagine [Los Angeles Rams quarterback] Matthew Stafford hoisting the [Vince] Lombardi Trophy with a third-party brand on his chest. The need isn’t there,” she said.

DISCUSSION QUESTIONS: Is the opportunity to advertise on MLB uniforms more likely to be a home run or strikeout for advertisers? What will it mean for the teams?

Please practice The RetailWire Golden Rule when submitting your comments.
Braintrust
"Baseball is trickier because traditionalists get the vapors at any real or perceived change in the game."

"As a marketer, I get the desire to build brand awareness by placing logos on uniforms. As a baseball fan, I loathe the idea."

9 Comments on "Will marketers hit a home run or strike out with MLB’s uniform ads?"

There is no place to escape the barrage of marketing messages, and that will now include at MLB ballparks. Logos on uniforms aren’t new. This is common in many sports, and so notwithstanding the initial negative reaction that we should expect from die-hard traditionalists, most fans won’t pay much attention, and the teams can bank some extra cash to help pay the extravagant salaries their players make.

As a Milwaukee sports fan, I’ve become accustomed to the Motorola logo on the front of the Bucks’ jerseys. (Although I still don’t understand the brand synergy there.) If it provides some incremental revenue that allows the team to sign its star players to long-term deals, I’m all for it.

Baseball is trickier because traditionalists get the vapors at any real or perceived change in the game. (Perhaps explaining the sport’s declining appeal among a younger and more diverse demographic.) But as the only major sport without meaningful revenue sharing — with small-market teams like the Brewers trying to squeeze out every penny of revenue from broadcast and ticket sales — it’s a reasonable change that the average fan will hardly notice.

Logos on uniforms is not new and in professional sports, it’s simply all about money. I’m not a fan of these because I like a clean, sharp look in a uniform, so yes, I’m a traditionalist in this sense. Unfortunately, the trend is moving towards multiple sponsors on uniforms. Perhaps one day soon, all of our favorite sports teams will look exactly like a collection of Nascar vehicles, cluttered with so many logos, you can hardly make out the number of the player and color of the uniform.

As a marketer, I get the desire to build brand awareness by placing logos on uniforms. As a baseball fan, I loathe the idea. And in my opinion, this is a slippery slope. Once we open the door to adding brands to uniforms, is the Nascar approach to selling every inch space on their cars to advertisers all that far away?

The day I see a “Your Name Here” patch on Aaron Judge’s batting helmet is the day I tune out forever.

Great. Now all professional athletes can look like Indy car drivers. I cannot register a strong enough *no* vote.

If a brand’s audience already loves to watch baseball, using uniforms as advertising real estate could be a homer. Or at least a hit.

MLB teams now have a new revenue stream as brands compete for prime ad space. Sports and advertising are a powerful way to reach an enthusiastic community in real time during live games with large broadcast audiences.

Makes one think these sports aren’t really all about the fans, as the leagues’ PR machines are constantly saying, but all about the money 😉

I have to admit I have a highly subjective, admittedly irrational, point of view on this question — it makes me gag. First we had uniforms du jour to boost merchandise sales. Then we got official gambling sponsors — not to mention over and under coverage on post-game shoes — for a sport that barred Pete Rose from its Hall of Fame because he bet on games. Now they want to turn uniform sleeves into the sartorial equivalent of a NASCAR hood? Enough! Look, if I was an owner or somebody with bottom line growth responsibilities for a team, I’d be online and on the phone 24/7 seeking out sponsors. But as a fam of my beleaguered Detroit Tigers, I just want to see a game, not more brand messaging.

Yeerrrrrrrrrr out! My prediction: the impact on (and for) advertisers will pale in comparison to the negative press it will generate for MLB. But now that we’re here, let’s ask about the actual impact: do these small logos really do anything? I think in cases where the product is integral to the sport — a player’s wearing an apparel logo, a racing car driver displaying a motor-oil, etc — it can maintain brand help brand image when it’s part of a well-developed overall program. But just sticking your name on something doesn’t do much, and the further your product is from the sport, the effect will get commensurately smaller as well.

Braintrust
"Baseball is trickier because traditionalists get the vapors at any real or perceived change in the game."

"As a marketer, I get the desire to build brand awareness by placing logos on uniforms. As a baseball fan, I loathe the idea."