Will multistory warehouses mean faster deliveries from Amazon, Home Depot and others? 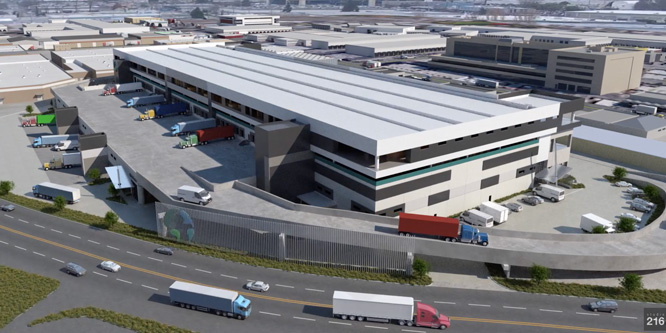 Amazon.com and Home Depot are looking to up their delivery games, and a new three-story warehouse in Seattle may hold the key to their future plans.

The facility, which allows trucks to drive up a ramp to dock on multiple levels, is positioned closer to population centers to help the retailers more quickly deliver online orders.

Amazon, Target, Walmart and a whole host of others are engaged in a competition to become known as the most convenient places for consumers to acquire the products they want to buy. Prologis, which owns the warehouse, developed the property with the competition for convenience in mind.

“You have to go vertical because you can’t find a 50-acre space in the middle of a city close to the customer,” Hamid Moghadam, CEO of Prologis, told The Wall Street Journal.

Other warehouse space operators are also building multistory facilities with similar objectives in mind. At least three such warehouses are planned in New York City, the Journal reports, including a four-story warehouse in Brooklyn.

[Editor’s note: While the warehouses identified in the Journal’s reporting may be new, the concept of multistory distribution centers is not. At least one department store chain, if not more, operated multistory warehouses in New York City in the past.]

Speedy deliveries are at the heart of Amazon’s value proposition with its customers, particularly Prime members. In April, Amazon announced that it was “evolving” its free two-day standard delivery on Prime eligible purchases to a one-day and even same-day timetable. A month later, Walmart announced that it was rolling out next day deliveries — no annual membership required — to about 75 percent of American consumers by the end of the year.

DISCUSSION QUESTIONS: Do you expect multistory warehouses in suburban and urban locations to become commonplace over the next decade? What do you see as the pros and cons of such facilities?

Please practice The RetailWire Golden Rule when submitting your comments.
Braintrust
"Using less land and traveling fewer miles should lead to lower costs, and there are other benefits, though it may not be appropriate for all types of retail or all contexts."

"Honestly, this is really funny to me. When the garment district was in New York, like a thousand years ago, Manhattan was filled with multi-story warehouses..."

"If you can’t go horizontal go vertical. This has been true in cities for commercial and residential properties for some time."

13 Comments on "Will multistory warehouses mean faster deliveries from Amazon, Home Depot and others?"

Land can be expensive, so building multi-story warehouses is not only wise; it is extremely cost-efficient. Today it has become all about delivery and that demand will only increase. Amazon sees that and creating a method to use a multi-story facility was brilliant. I would expect other companies to follow the same strategy. In time as more technology kicks in and drones are used regularly along with self-driving vehicles, getting the product to the customer will become a significant business within itself. However, for the time being, Amazon and its competitors must work within the present limitations of delivery which, for the most part, involve trucks and delivery services such as UPS and FedEx. So what we see here is a great solution and one that will benefit Amazon as well as their customers.

There is still a cost issue with multi-story warehouses on more expensive real estate, but as Amazon and others raise the bar, others will be forced to follow or find another way to compete.

Honestly, this is really funny to me. When the garment district was in New York, like a thousand years ago, Manhattan was filled with multi-story warehouses, where trucks would ride the elevators up to different floors depending on what they were delivering. I remember visiting one of Macy’s, and lots of wholesaler ones with my father when we’d go on buying trips. There were always issues with it, not the least of which was the logistical challenge of getting orders out the actual door on the first floor. There is really nothing new here at all (besides more automation once you’re on the floor(s) I suppose). This is a math problem. If you can rent warehouse space in a suburban area for one-fourth of what you can rent it for mid-city, why wouldn’t you? Then your employees don’t have to worry about high-rent dwellings in the middle of the city. This math is how Sears decided to sell its iconic building in Chicago and move out to Hoffman Estates, and I think it’s going to… Read more »
4
|
0
-   Share

This is all about distribution network strategy, of course. This is not a “one-size-fits-all” situation. Your analysis must include market size, density and a multitude of other factors. All of this must be considered, along with the fact that there is still unused/vacant space virtually everywhere that may be available.

Some of the challenges with multi-story facilities and the related history shared by other commenters are well noted.

That said, I’d argue that the present context is quite different, and that decades of building out instead of up has created a multitude of other issues that transcend “costs” as they appear on financial statements.

Using less land and traveling fewer miles should lead to lower costs, and there are other benefits to an approach like this, though it may not be appropriate for all types of retail or all contexts.

Vertical warehouses have been around for more than two decades in the retail food and foodservice business. They go hand in glove with product handling automation. While they’re not, strictly speaking, multistory warehouses in that each story doesn’t have a floor/ceiling, these facilities can be 100+ feet tall. I remember seeing the Gordon Food Service (GFS) facility in Grand Rapids about 25 years ago and being intrigued by the automated storage and retrieval system that put away pallet loads using robotics. C&S and McLane have had similar distribution centers operating for years.

If you can’t go horizontal go vertical. This has been true in cities for commercial and residential properties for some time. The same logic applies to warehouses when faced with the same lack or cost of properties. The “I want it now” mentality that is driving our society is not going away.

Shortening the time between order and delivery has a perceived value that is not going to go away. Locating its warehouses as close to the customer as it can allows Amazon to capitalize on our need for speed.

Interesting that this idea is considered news (emphasis on “new”). The idea of multistory distribution centers has been around for decades. Whether a new idea or not, however, maximizing urban space to bring more product closer to more people likely makes logistical sense. On the other hand, does it make sense for the people working minimum-wage jobs in those warehouses located in high-rent districts? Not so likely.

When I read the headline for this discussion, my first mental image was of a tall 3-dimensional space, with a smaller footprint that uses conveyors/robots to move items in and out of trailers and slots with great rapidity. Ron Margulis describes something similar in his comment here. But the video portrays a stack of separate flat warehouse spaces with loading doors on three levels and vehicle ramps that (to me) resemble those outside New York’s Port Authority bus terminal. More expensive to build, I’m sure, than the flat, sprawling, million-square-foot Target and Amazon distribution centers here on the outskirts of Tucson.

Putting the D.C. closer to (or within) an urban center may help shave minutes off home delivery times and worker commutes. It may add minutes to the access time of the big trucks. I presume the designers have run the numbers and are satisfied with the trade-off.

A century ago, when I first started working, we used 10 or 12 public warehouses across the country. This was 1970, and every warehouse was multistory. By the time I left that company, 12 years later, all the multistory warehouses were closed down and the sprawling one-story warehouses were the norm. It had a lot to do with the Interstate highways and the ease of the internal logistics.

Today, warehouse technology has changed and the number of stories has become less meaningful. The savings are on the ground and in the ability to deliver quickly.

I believe that, as many of the big players who have avoided urban locations will be forced to move to this more consolidated model. Just as they have had to modify their store approach to fit the smaller urban footprint, they will need to do the same with their distribution centers. This denser multiple level approach will allow them to compete in the approaching same-day battle.

Good news for thousands of abandoned/underutilized old factories/warehouses around the country? Probably not. The whole trend in PDR space over the past century has been toward single story space, and even if that can be reversed (for the reasons mentioned), I doubt the older space would meet modern needs.

So, now having answered a question not actually asked — but too interesting to pass up! — I guess I’m baffled as to why anyone would think it mattered. Certainly Amazon isn’t going to try to patent the idea!

As consumer purchase >> delivery expectations continue to narrow, fulfillment centers will need to be able to store product in dense population centers to meet these expectations. Land is not cheap and building up allows a company to do more with less. There are numerous defunct shopping malls which may be a great option to retrofit to meet these ever-evolving needs.

Braintrust
"Using less land and traveling fewer miles should lead to lower costs, and there are other benefits, though it may not be appropriate for all types of retail or all contexts."

"Honestly, this is really funny to me. When the garment district was in New York, like a thousand years ago, Manhattan was filled with multi-story warehouses..."

"If you can’t go horizontal go vertical. This has been true in cities for commercial and residential properties for some time."