Will one CEO be better than two for Whole Foods? 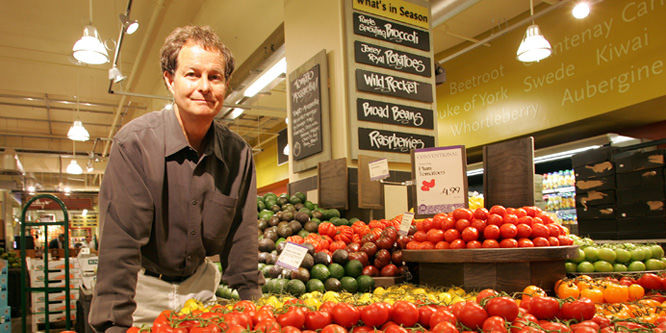 Whole Foods is scrapping its co-CEO arrangement. Founder John Mackey will remain as the sole chief executive at the company. Walter Robb, who was positioned as the person with the business acumen to deliver on the outspoken Mackey’s vision for the company when the co-CEO position was created six years ago, will leave his co-CEO role on Dec. 31 while remaining a member of the Whole Foods board.

The thinking behind the move is that having one CEO will streamline decision-making at the company and enable it to move more quickly to address key needs.

Mr. Robb, a 25-year veteran at Whole Foods, has been credited with helping to grow the company from 12 to 464 stores during his time at the company.

“It is impossible to convey what Walter has done for Whole Foods Market since he joined us in 1991,” said Mr. Mackey in a statement. “His incredible passion for retail and sense of the customer makes him the most extraordinary retailer I’ve had the privilege to work with. During his 25 years of leadership, Walter has been an advocate for the Whole Foods Market culture and a champion for our Team Members.”

Mr. Mackey will take over as sole CEO of a company that has experienced falling same-store sales as competition has increased from a wide variety of grocery competitors selling organic foods and beverages. Whole Foods has responded by cutting costs, instituting a more competitive pricing structure, rolling out a loyalty program and debuting its new small store 365 concept.

DISCUSSION QUESTIONS: Do you think Whole Foods is better off with one chief executive rather than the two it has been operating with over the past six years? Did the board choose the right person to lead the company?

Please practice The RetailWire Golden Rule when submitting your comments.
Braintrust
"While two heads are often better than one, this doesn’t apply when it comes to the CEO."

"I have never seen co-CEOs work well — in fact, exactly the opposite. It causes unnecessary conflict at times and confusion..."

"Yes and yes. There is an inherent economy to simplicity and focus."

11 Comments on "Will one CEO be better than two for Whole Foods?"

This probably won’t have too much impact on the business except that Walter Robb is seen by the organic community as a betrayer. Having that liability removed from visibility can’t hurt, but the real challenge is to position the company and make it effective as others jump on the growth of organics.

There’s a reason co-CEOs are rare — it doesn’t work. I believe that having a singular, consistent vision is essential for organizational effectiveness. By definition, co-CEO arrangements provide two, often conflicting, visions. I believe that Whole Foods will be better off with one CEO. Whether the board chose the right leader, only time will tell, but regardless they just simplified and clarified their vision by choosing one leader. While two heads are often better than one, this doesn’t apply when it comes to the CEO.

The last question we’ve been asked to respond to is the most important. But first to the first one. In almost all cases there needs to be a leader. Otherwise incredible amounts of time and angst are spent determining which one you need to win over in order to launch an innovation or even do your job.

That said, My friend David Thomson wrote “Blueprint to a Billion” a few years back on how to take a business into the top echelon of their industry. One of the qualities is a dual leadership, but not a co-CEO set up. One leader, Thomson suggests, must be distinctly internally focused and the other externally focused. It doesn’t work if both try to do both.

So is Mackey THE CHOSEN ONE? Ken’s comment above gives me pause. And frankly the “organic” distinction is so yesterday. That is not the battle ground. A new space far beyond “organic” needs to be identified and branded.

Yes and yes. There is an inherent economy to simplicity and focus. Any corporation with two co-CEOs is an NFL team with two starting quarterbacks. The coach often claims he has two talented passers but the truth is he simply won’t make the decision to win.

Co-accountability comes with an overhead and a structural flaw that most objectives and outcomes can ill afford. On one hand, nothing focuses the mind like being that single “throat to choke.” On the other hand, nothing is more confusing and frustrating than the matrix organizational approach.

Whole Foods struggles to figure out which pond it belongs in. While floundering about as a big fish, it can’t swim in the 365 pond as it’s too big to try to float in it. The 365 standalone store, as I said a year ago, is a mistake and should be a separate department/aisle within the regular Whole Foods. The Whole Foods concept was to be a mid-sized specialty store and the flirting with large to mega-sized stores loses the sense of the mom-and-pop friendliness of the Whole Foods that was started on 6th Street years ago. It’s the story of the medium fish that is trying to be a big fish and is having whale problems.

I have never seen co-CEOs work well — in fact, exactly the opposite. It causes unnecessary conflict at times and confusion, and I can see no good reason for it. I have coached CEOs through this situation and have seen first-hand the challenges created. This can only be a good move for the Whole Foods business to gain more internal clarity and direction, and eliminate any external confusion of leadership.

This would be a great opportunity to make a catty remark — like they’ll still have a double-sized ego in charge — but looking at the merits of the dual-CEO idea, I don’t think it’s ever really workable (except perhaps in some odd situation where two siblings run a company and one is finance, the other technical, or some such) … there’s a reason why the position is called “Chief.”

One CEO, one decision, one direction, one voice. Unification at the upper management level for any company is critical to its success.

It’s not impossible. A co-CEO arrangement can work if the mission and vision are unified. On a practical basis, one CEO will be subordinate to the other depending upon the issue.

It won’t affect Whole Foods; only those who talk about them.

Braintrust
"While two heads are often better than one, this doesn’t apply when it comes to the CEO."

"I have never seen co-CEOs work well — in fact, exactly the opposite. It causes unnecessary conflict at times and confusion..."

"Yes and yes. There is an inherent economy to simplicity and focus."