Will parents and kids go for healthier Happy Meals? 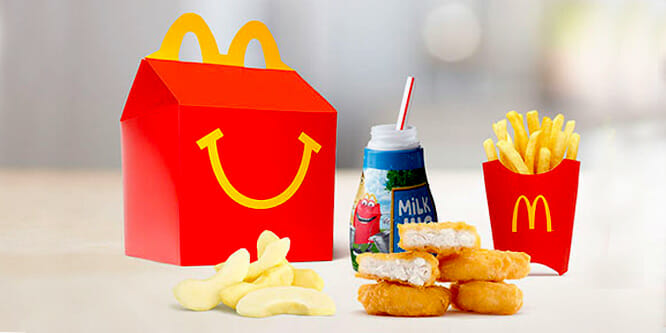 Few restaurants are less associated with healthy eating than McDonald’s. But as American dining trends skew healthier, the chain is taking steps to revamp one of its most iconic offerings to make it better for its patrons.

In a press release last week, McDonald’s announced significant changes to its Happy Meal. By 2022, the chain intends to have at least half of its Happy Meals on menus worldwide contain 600 calories or fewer, with only 10 percent of calories from saturated fat, 10 percent from sugar and fewer than 650 grams of sodium. (Currently 28 percent of McDonald’s Happy Meal combos in 20 markets meet the guidelines.)

McDonald’s intends to achieve these goals by including a smaller portion of French fries with chicken nuggets, reducing the sugar in chocolate milk, featuring water as a beverage option and making cheeseburgers a by-request only offering. McDonald’s plans to have all U.S. Happy Meal combos meet the calorie, sugar and fat guidelines, and 78 percent meet the sodium guidelines, by June of this year.

This isn’t the first step McDonald’s has taken to move the Happy Meal in a healthier direction. The chain has begun offering options such as fruit, baby carrots and “Cutie” tangerines as Happy Meal sides, according to The Washington Post.

McDonald’s performance has suffered for years as U.S. consumers have grown to favor fast-casual dining options that offer greater variety and restaurants that they perceive as healthier.

The chain has made both operational improvements and changes to its non-kid’s menu in an attempt to upgrade its image. In 2016, McDonald’s began implementing touch screen-based ordering and table service to its locations. Some locations have also adopted a “gastropub-style” ingredients list along the lines of what one would find at a gourmet burger joint. McDonald’s also removed what it called “artificial preservatives” from its Chicken McNuggets.

At the same time, McDonald’s has tried to find ways to court a price-conscious customer while allowing franchisees to maintain their margins. Last year the chain released a “$1 $2 $3 Dollar Menu” which is the latest relaunch of the chain’s popular value menu.

DISCUSSION QUESTIONS: Is McDonald’s going too far, or not far enough, with its proposed attempts at healthier offerings for kids? Will making Happy Meals healthier have a positive impact on the public perception of McDonald’s?

Please practice The RetailWire Golden Rule when submitting your comments.
Braintrust
"This move towards healthier meals will increase the threshold of tolerance for many health-conscious parents and McDonald’s will benefit. "

"It is not a bad thing to do, but it is still fast food. By making the portions smaller you can meet the guidelines, which is not rocket science."

"You have to look at your top customers first and determine what they want then think about drawing new customers without running off the others."

14 Comments on "Will parents and kids go for healthier Happy Meals?"

McDonald’s is not moving fast enough. Why wait until 2022 to implement these changes? The company should be more aggressive in its health initiative. While its Dollar Menu may be attractive to budget-minded diners, lasting growth will come from more quickly adapting to consumer desires.

This move towards healthier meals will increase the threshold of tolerance for many health-conscious parents and McDonald’s will benefit. Should McDonald’s decide to take this concept further, it will gain even more acceptance. It appears to be a recognition of the overall trend towards more healthful eating and obviates being abandoned completely as a fast food destination.

I think it’s important that the option is there but I can’t see much uptake, unfortunately. It’s not going to be the first port of call for parents seeking healthy options — perception takes a long time to change. And usually that McDonald’s visit is a “treat” or the result of caving to much badgering … and not for salad.

I’m in Jennifer’s camp on this one. I believe you have to look at your top customers first and determine what they want then think about drawing new customers without running off the others. Options are great but keep that top 10 percent happy first. For my 2 cents.

It is not a bad thing to do, but it is still fast food. By making the portions smaller you can meet the guidelines, which is not rocket science problem solving. How about some low-carb wrap burgers, and carrot sticks to replace the fries as an option? There you might have something unique. McDonald’s is a monster franchise, and if it really wanted to alter the current Happy Meal it should just add real healthy options and keep the original, giving the customers a real choice and letting them decide.

McDonald’s can continue to succeed as the provider of low-cost, appealing food while growing into healthier options. As they balance the cost of lost business and brand appeal against new offerings, their patron base will vote with their wallets. I will be especially interested to see the degree to which menu options continue to be generally consistent across markets.

This is a positive move and one that McDonald’s should be applauded for, especially as it gives the consumer more choice — both to kids and their parents.

That said, I reject the view that McDonald’s should move further or faster. Who goes to McDonald’s to eat healthily? Hardly anyone. That’s just not the role of the company. Sure, it’s nice to have some healthy options, but it’s not the mainstay of the company’s business.

As for McDonald’s image, yes, some people do look down on it, but most Americans don’t. They see it for what it is — a fast food operator providing convenient meals that taste good for a great price!

In the U.S., McDonald’s Happy Meals will reach their caloric, fat and sugar guidelines in another four months. That’s significant progress and a major step in attempts to associate healthier food options to positively impact the McDonald’s brand.

The trend toward healthier food ingredients is not a fad and needs to be incorporated in any growth strategy. There are quick solutions such as offering smaller portions, but the hard work comes in changing the ingredients, securing sources, and establishing new supply chains and processes; those take time.

McDonald’s is on the right track and given the company’s size and global reach, it can raise effectively our expectations of fast food in the coming years.

McDonald’s move to healthy is needed to compete, but the change it needs is more than the products. There needs to be a communications plan to change the perception of McDonald’s to one of being the healthy fast food. Because of the the public perception of McDonald’s being unhealthy, I would instead launch a new line of healthy food offerings called [Brand X] by McDonald’s. This way, they could shape the new perception from the beginning.

With society’s momentum and shift to a healthier, holistic lifestyle and a focus on healthier food choices for our young kids, McDonald’s would benefit significantly by taking a more aggressive stance with their evolution. My young kids are aware of all the foods they eat, are concerned as to where they are sourced from and most importantly if they are organic. Organic food, healthy living and trust and transparency have slowly become the norm in the food and restaurant industry. These are welcome moves by the company, but there is so much more opportunity for change.

Reducing the portion size of fries makes a lot of sense — why not also reduce the size for regular portions by, say, 10 percent? I don’t know if anyone would even notice the difference, but it could have a huge effect on all our waistlines as well as franchisee profits.

2022 is far too late; the market is moving now and they are already perceived to be behind. Taking four years to improve is a brave approach for the wrong reasons. Ultimately this will not make McDonald’s healthy, just less un-healthy, which may keep some parents in the game for them.

While this is a positive move for McDonald’s, it still doesn’t really move things far enough in terms of a transformation of McDonald’s in the eyes of the customer. McDonald’s has a challenge — they need to decide who they will be in the future. Will they continue to be the #1 example of a fast food restaurant, or will they transform into a new breed of fast-casual restaurant? The fact is, today, consumers do not think of McDonald’s as a healthy food option, and simply changing a few menu items is not going to change that for anyone. If that is their goal, McDonald’s will need to go much further. Do they need to do this? Not necessarily — they can still offer options but stay core to their current brand.

My kids are adults now, so maybe I’m not qualified to respond, but in my opinion the Happy Meal is about two things: convenience for the adult and hunger satisfaction for the child.

I haven’t done an in depth study, but I’m predicting the population of Happy Meal eating children will rebel if the food isn’t desirable. Their parent won’t buy the new and improved Happy Meal more than once if their kids won’t eat. No one wants to waste money on healthy food no one eats!

I am encouraged however about McDonald’s approach to portion control (less fries and nuggets) and substitution (water instead of milk, juice or soda). Just encouraging kids to drink water at many meals would be a healthy step forward and potentially large cost savings for the consumer, depending on how McDonald’s prices their water option.

Braintrust
"This move towards healthier meals will increase the threshold of tolerance for many health-conscious parents and McDonald’s will benefit. "

"It is not a bad thing to do, but it is still fast food. By making the portions smaller you can meet the guidelines, which is not rocket science."

"You have to look at your top customers first and determine what they want then think about drawing new customers without running off the others."