Is McDonald’s backpedaling on fast casual with a low-price strategy? 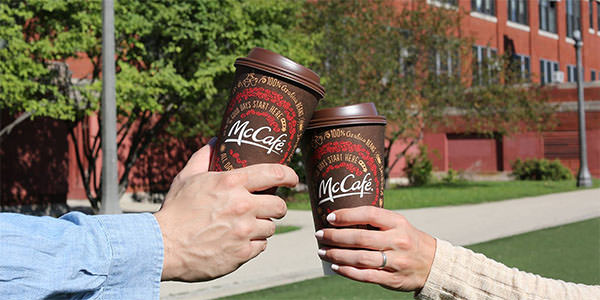 The major news about McDonald’s coming out over the past year has depicted a chain revamping its look and feel to try to dump its budget image and compete with fast-casual restaurants. But its latest move seems to indicate that McDonald’s still wants – or needs – to compete on price.

The chain has begun offering $1 sodas and $2 coffee drinks nationwide in April in what The Associated Press is calling an attempt to bring in customers and turn around four years of slumping sales.

McDonald’s has struggled to reassert its relevance as customers have turned away from quick-serve restaurants. One of its most successful endeavors in that regard was the implementation of a long-demanded all-day breakfast menu. This generated a lot of news and lifted sales temporarily, but the sales bump didn’t stay for long. The chain also rolled out new Big Mac varieties and ran a Special Sauce giveaway.

On the tech side, the introduction of touch screen ordering in what was billed as the “McDonald’s of the Future” and an expanded “gastropub-style” ingredient list last year gave the impression that the chain was pursuing a new, fast-casual brand identity.

The ordering kiosks have made it into 500 U.S. McDonald’s locations so far and 2,600 globally according to an article in the Palm Beach Post, and by the end of 2017 are slated to appear in 600 McDonald’s restaurants in Florida alone. McDonald’s attributed a sales increase in Canada to the kiosks.

But a renewed focus on providing ultra-low-cost options seems like a backpedal on the “McDonald’s of the Future,” acknowledging that it is the price, not the dining experience, that can bring customers in the door.

Within a few months, McDonald’s seems to have gone back and forth on the issue. Recently CEO Steve Easterbrook said, according to Business Insider, that driving traffic with discounts and promotions will be the chain’s main focus this year.

But at the end of January, in the wake of a quarter that beat analyst expectations, Mr. Easterbrook said that the chain was on its way to being “recognized by [McDonald’s] customers as the modern, progressive burger company.”

DISCUSSION QUESTIONS: Is McDonald’s betraying its avowed goal to be seen as a “progressive” burger company by focusing on low-price offerings? Should McDonald’s still be focusing on cheap offerings to bring in customers?

Please practice The RetailWire Golden Rule when submitting your comments.
Braintrust
"Congratulations to McDonald’s for understanding that its core demographic and the demographic for, say, Shake Shack are different."

"It is good to see McDonald’s backpedaling to what it authentically is and should be."

14 Comments on "Is McDonald’s backpedaling on fast casual with a low-price strategy?"

Companies want and need to invest in the future but shareholders have the attention span of a gnat. Any slight drop in sales, no matter how temporary, is a debacle.

Likewise, any bump in sales is a magic bullet (like all-day breakfast).

These businesses need to invest in their brands. I’m not talking about the old models of corporate marks and brand associations. I’m speaking of a connection to an emotional customer self-definition.

Will McDonald’s recognize that the brand is not about hamburgers but an aspirational need by the target audience? It is about an experience and that experience is to believe a destination is emotionally “them.” A whisper from an avatar-customer proclaiming, yes, I want to be that.

Or will they think this is all about fast food or fast-casual dining? I’ll bet we can guess.

Congratulations to McDonald’s for understanding that its core demographic and the demographic for, say, Shake Shack are different. While McDonald’s stunning success has fueled the rise of rivals, it’s pointless for McDonald’s to attempt to copy them. Truffle burgers don’t belong at McDonald’s, but $1 Cokes do. I’ll predict success for these promotions.

The problem with McDonald’s trying to rebrand itself as a progressive burger company is that its burgers don’t match up with gastropubs. They beat casual dining on price, but they lose on taste. There’s no harm in offering promotions to bring consumers into the stores, the hard part is getting them to become super-loyal McDonald’s diners.

I am not a busy mom with a kid in tow looking for a place I can turn my kid loose to play while I catch up with my texts and eat something maybe not too expensive. But I see their pain and that is what I thought McDonald’s was becoming. I am a Big Mac lovin’ citizen who sees my stop at McDonald’s during road trips as a highlight.

If McDonald’s can continue down the path as described above, offering burgers and maybe something healthy but fun to eat (fruit slices as a side for kids and not just fries) they may see some “happy returns.” Get it? Sort of like Happy Meals.

Should they focus on cheap? They should focus on options. But that’s just my 2 cents.

Flexibility, resilience and even nimble-ness to take a brand into trials and new territories is the new basis of consumer-facing success in this age of the empowered consumer. That is progressive, and back-tracking can mean reinforcing turf previously won. Through all this, connection to the consumer is key, with communications approaches that get offers across and engage customers to generate transactions and deepen brand connection.

McDonald’s should continue to focus on their loyal consumers, as they have stayed with the brand and will continue to do so. It’s wise of McDonald’s to strategically provide lower costs items, as that is what their fan base knows and expects.

For the brand to attempt to evolve into a “gastropub” style fast food chain would go against their core principles, of fast, cheap and accessible food. Its a completely different segment and customer.

Where McDonald’s should focus on is the customer loyalty area and leverage their mobile app to draw in new customers. New item offerings would help matters as well.

McDonald’s has done a great job over the years of establishing their brand. They have a unique place in everyone’s mind. But the reality is that they are what they are. They can not go upscale operationally nor figuratively. By not being the McDonald’s that we know, McDonald’s the brand will be meaningless. They will lose all that remains and gain nothing.

It is a hard position to be in. Trends are going in the wrong direction for them. Perhaps they should spend a little time with the old BCG model and treat the current business as a “cow” (before it becomes a “dog,”) and look for “stars” to invest in.

This is once again another example of good intentions meeting the reality of Wall Street — strategy competing with share price. Low-price is a quick fix. It’s easy to implement and get results. Getting results while trying to change as a public iconic brand is extremely difficult.

Great point Adrian. The TimeTrade State of Retail 2017 study report noted that $150 billion in revenue was lost in 2016 because retailers have failed to provide better customer experiences. According to the study findings, consumers will pay 5 percent more, and Millennials a full 20 percent more for a better experience. Experience is king. See the stats here.

The $1 drinks have been around for a long time and seem to be standard at McDonald’s. The $2 McCafe drinks don’t seem to be going over well from what I see. If you order one someone has to scramble to figure out how to make one. It could be because I’m getting older and their food does not agree with me like when I was younger. Cheap offerings bring in cheap customers. The competition is probably delighted. McDonald’s will never be fast casual. That ship has sailed.

McDonald’s is no different from any other price-selling retailer in its struggle to get the floor traffic it must have for a profit. They lost sight of this decades ago when the executives were convinced that price didn’t matter. Then along came the 21st century we are still stuck in and away went the floor traffic and sales. A better way of looking at how much trouble they really are in would be to look at landed costs of goods sold and then adding the store operations costs. McDonald’s is framed for high speed production with very low labor costs. When price returned as the chief market goal the whole production plan became a burden. Slow sales caused a halt to any retooling effort for the company, leaving the company sinking slowly but steadily. The bad news is that they are not alone. This will get worse with the sudden unexplained disappearance of unskilled laborers. Small businesses that have not been shuttered by high taxes and surrealistic health care benefit costs are closing rapidly here… Read more »
1
|
0
-   Share

In renewing its focus on low-price offerings, McDonald’s isn’t so much betraying its aspirational (and perhaps misguided) goal of being a progressive, fast-casual brand as it is learning the importance of staying true to who and what it is as a brand at its core. The McDonald’s customer always has, and always will view the company as a quick-serve operator and expects pricing to be in line with this positioning. Though the company may have a grand vision of somehow shifting its go-to-market position and move a bit upscale, the very notion of this goes against everything its customers have grown up knowing and expecting. It is good to see McDonald’s backpedaling to what it authentically is and should be.

I would respectfully submit that being progressive and having low prices are not in conflict. Additionally, we should consider the McD’s version of “upscale” from the perspective of their core consumer/occasion vs comparing it to expectations when entering Five Guys or Shake Shack. I see a greater competitive threat — at least in the East — from establishments such as Wawa, Sheetz, and other grab ‘n go fuel combos.

I wouldn’t call this backpedaling on their desire to become more like a fast casual brand. The fact is the McDonald’s brand is a well established brand for most people and no amount of forcing change onto that brand will cause existing audiences to suddenly declare McDonald’s a fast casual in the way they look at a Smashburger or BGR Burger or others. While that tactic may attract a new breed of customer to McDonald’s, they’re doing the right thing by their loyal customer base in offering discounted offers. It shows they haven’t abandoned those customers. The trick will be trying to convert those loyal customers into their more upscale (and pricier) menu selections after the discounts end.

Braintrust
"Congratulations to McDonald’s for understanding that its core demographic and the demographic for, say, Shake Shack are different."

"It is good to see McDonald’s backpedaling to what it authentically is and should be."