Will showrooms work for fast fashion? 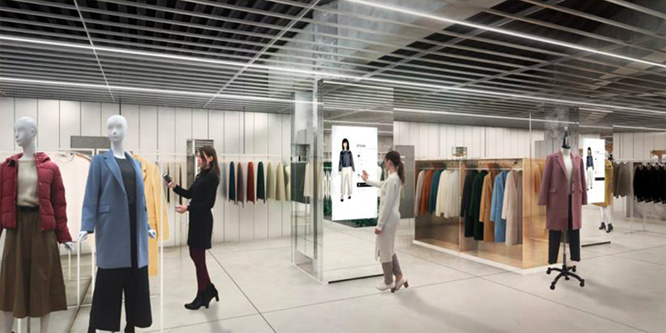 Visitors to a new clothing store by the owners of Uniqlo can “just walk out” after their visit — but they can’t take any of their purchases with them.

The store, called the GU Style Studio, opened in late November in Tokyo’s fashion district. Visitors to the store can try on and try out an assortment of clothing, bags and shoes, but the store holds no inventory. Items on-hand are only available to demo and order online for later delivery. While the company hasn’t decided if it will extend the technology to its other brands, it does recognize the possibility of rolling out the technology to open smaller shops in urban environments, including Uniqlo shops.

An article on PSFK clarifies that the buying process is QR code-based. Visitors scan price tags with their smartphones and are taken to corresponding ordering links.

The GU Style Studio also features a piece of technology called the GU Style Creator Stand. It consists of a touch screen which, according to a press release from the parent company Fast Retailing, allows visitors to take a picture of themselves which is then turned into a digital avatar. They can then “try on” clothing items on-screen. The Stand integrates with a smartphone app, so that customers can further experiment with virtual try-ons on the device, as well as save and order styles they like via mobile.

The GU banner currently has 393 stores throughout Asia, mainly in Japan, according to the parent company Fast Retailing’s website.

Showrooms have been growing in popularity, with once online-only retailers like Warby Parker, Bonobos and Casper opening delivery-only outlets for their products.

The trend has also emerged in luxury apparel. Nordstrom notably opened its first inventory-free showroom in West Hollywood at the end of 2017. Since then, Nordstrom has expanded the concept with two even smaller showrooms elsewhere in California. Unlike the GU Style Studio, though, the Nordstrom showroom allows for BOPIS, curbside pickup and delivery from adjacent stores to the showroom.

DISCUSSION QUESTIONS: Does a full showroom concept with no option to buy in-store make more sense in fast fashion apparel vs. other fashion segments? Would it make sense or a basics store like Uniqlo as well?

Please practice The RetailWire Golden Rule when submitting your comments.
Braintrust
"In fast fashion, I just don’t see it. There’s nothing fast about it."

"The allure of fast fashion is that it’s FAST. By taking away the option of instant gratification, I believe it will be a turnoff..."

10 Comments on "Will showrooms work for fast fashion?"

My first exposure to showroom retailing was with Bonobos and at the time I found it odd. I now embrace the whole concept for apparel, fast or slow. Why schlep? Shop, buy and it shows up at home in a day or two. The flipside is managing inventory. It’s a lot easier to stay in stock in one centralized pooled inventory than staying in stock by size and color in tens or hundreds of locations. I’m guessing a hybrid model will emerge. Buy now and schlep will make sense for some portion of the offering. Buy now and ship will work for other parts of the offering. New marketing handle — “Ship or Schlep.”

I know there are some people who are bullish on this idea. I’m not one.

It’s not great for the retailer because suddenly you’re shipping in 100 percent eaches at a low price point and dealing with high levels of returns.

Plus, as a consumer, I don’t think I want to try on something that has been tried on by many before me, for sure. It’s vaguely creepy.

It kinda-sorta makes sense in luxury. In fast fashion, I just don’t see it. There’s nothing fast about it.

I’d add that there are a bunch of fast casual customers who are buying for special occasions; look at the abundance of sequins in any H&M today. Having to wait for delivery, with a price hike either implicit or explicit, just doesn’t fit. I’m not in on this one.

I don’t doubt that this can work, especially for more considered purchases. I also applaud Uniqlo for innovating. However, instant gratification is still massive in fashion, especially at the cheaper end of the market. It is also the case that fulfilling the orders arising from the visits to the showroom are probably more costly than having customers get things while in-store. For these two reasons, while I think showroom concepts will grow, I don’t think they will replace traditional stores.

Several years ago I reported about a small shop on Corso Como in Milan. A small shop on this fashionable street in this fashionable city that was set up to sell everything online. While it was several years ago and the sales people did not have tablets, the back of the store had four computers that the customer could use to order. Fast forward to last Saturday and my visit to the new Restoration Hardware in Chelsea. It is essentially the compound modeled for the city. It is massive. Finding help was a little difficult, but we did. The first thing the salesperson says, “we don’t sell anything here, we just have samples.” OK, I understand that you can’t carry home the new dining room table. But what my wife was buying was linens. So they had lots of samples of linens. But not the style my wife saw online and wanted to see in person. The salesperson said, “We don’t have room for everything.” Really? This place is massive. She says we can order… Read more »
1
|
-1
-   Share

I can see this concept for items like glasses and mattresses; things that I do not expect to take home that day. But for fast fashion and accessories? Why?

As a consumer, when I take the time to visit a store, I expect to be able to take home whatever it was I came in to buy. If I wanted to wait for something I would order it online. I’m with Paula, I just don’t see it.

Totally get the concept for higher-end items, customizable products or products that you don’t want to carry home (i.e., mattresses). But the allure of fast fashion is that it’s FAST. By taking away the option of instant gratification, I believe it will be a turnoff for a portion of the target market.

The jury is still out on if a showroom concept will work for fast fashion. There are some very compelling benefits for the retailer: less inventory carrying costs and write-offs and less real estate investment. However, on the downside, there is the added cost of shipping that the retailer will either have to absorb or pass on to the customer.

From a consumer perspective, as long as they don’t need or want the item immediately, they will have much broader choices of styles, colors and sizes, at they can order from a more extensive inventory than a typical store could carry. Retail stores are changing and the stores of the future may look dramatically different that what we are used to today.

This is simply another option for purchase.

There will probably always be stores with merchandise and someone who wants it now will go there, and a lot of people will not want to carry stuff around so this showroom store will work well for that. Perhaps it will be the future model, but there will be some person who has a store where you buy it and carry it away! Maybe someday that will be the special place — actually take the item with you instead of waiting for delivery!

Braintrust
"In fast fashion, I just don’t see it. There’s nothing fast about it."

"The allure of fast fashion is that it’s FAST. By taking away the option of instant gratification, I believe it will be a turnoff..."