Will ‘shrinkflation’ grow into a big problem for CPG brands? 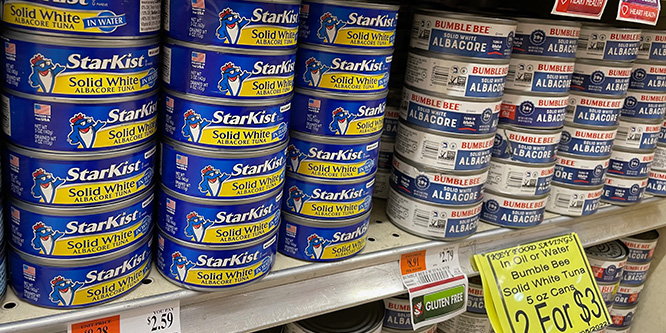 With no sign of inflation abating, manufacturers have started to shrink package sizes while keeping prices the same — and customers are starting to notice.

Local news stations around the country are citing notable increases in “shrinkflation”. Northern Michigan’s ABC affiliate UpNorthLive reports that StarKist* tuna cans are 17 percent smaller, Dannon yogurt is 14 percent smaller, a party-sized bag of Lay’s chips and a jar of Ragu are both 14 percent smaller. Charmin toilet paper jumbo packs have been reduced by 24 sheets per roll, Keebler cookies contain 18 percent less per pack and Breyer’s ice cream is 25 percent smaller. The report does not indicate the precise start date of the observed shrinkflation, but marketing and logistics expert Mark Spieles described shrinkflation as a strategy companies are using today in response to inflation.

Grocery stores in Denver are experiencing a “surge” of shrinkflation, according to a report by KDVR.

Shrinkflation is not a phenomenon entirely unseen outside of today’s broadly inflationary economic circumstances.

Cadbury in 2019, more than a year before the pandemic began rattling the global economy, publicly admitted reducing the size of its iconic Cadbury Creme Egg by 11 percent while only reducing the price by 2.5 percent, as a reaction to increasing ingredient and production costs, according to the Daily Mail.

While shrinkflation allows CPG companies to maintain margins without visibly increasing prices, such moves do not always go unnoticed by shoppers and have, in some instances, led to significant blowback beyond just public relations damage.

In 2015 a class action lawsuit was brought against seasoning maker McCormick in reaction to the company’s reduction of the amount of black pepper in its containers by 25 percent, despite keeping the container the same size, according to a 2017 report on shrinkflation by finance consultancy Oxera. While the new, reduced weight was written on the container, the class action alleged that customers had come to expect the same amount of pepper from each container, given that they had been in use for decades.

*On 5/9/2022, a representative of StarKist reached out to RetailWire, stating “the brand has not changed packaging sizes in over a decade.”

DISCUSSION QUESTIONS: Is it a good move for CPGs to reduce the amount of product in packages rather than raising prices at this point in time? How should CPGs respond in the face of criticism surrounding shrinkflation?

Please practice The RetailWire Golden Rule when submitting your comments.
Braintrust
"It is better practice to increase prices using a differentiated strategy incorporating consumer segments, product roles and so on."

"This has been going on forever. Is this the excuse of the day?"

28 Comments on "Will ‘shrinkflation’ grow into a big problem for CPG brands?"

It is common in the CPG world to practice shrinkflation, especially to hit profit metrics. However CPG companies should consider whether this move sacrifices long-term growth for short-term financial gains. When consumers start to notice, they use it as an opportunity to evaluate their purchase process and look for alternatives on the shelf. Thus the bigger risk is losing consumers altogether (and then they may never come back). It is better practice to increase prices using a differentiated strategy incorporating consumer segments, product roles and so on. Best practice is to also be transparent about rising costs and communicating the value that is provided.

Exactly! You said it all so well.

Consumers are already upset, as their money no longer stretches as far; shrinkflation compounds their frustration.

To stave off private label threats, brands will need to emphasize their superior quality and value for money.

Yes to this. You’ve defined a go-to playbook for CPG brands. They must emphasize higher grading of ingredients, sourcing, quality or how it saves customers time/money. If they won’t, or don’t have any of these differentiating advantages, private label brands will expand marketshare.

I don’t see a big risk to manufacturers except a risk that the headlines get out of control. Is it a smart strategy? I don’t like it. But among their options the risk of backfiring is low from what I can see.

Shrinkflation erodes trust in the brand, particularly when outer packaging dimensions remain the same. Cutting back on aggressive promotions and bundling products is a better approach. This is also a great time to build on brand loyalty by giving customers manufacturers’ coupons.

The shelf-edge price matters. Many consumers look and compare it to rival brands and own-label alternatives. If that price changes, then there is a risk of switching or substitution which reduces volumes. And all of this is exacerbated at a time when household incomes are under intense pressure. However CPG firms do need to protect margins as many are facing cost headwinds. The alternative to straight price increases is to increase unit prices, so they give consumers less for the same price. Reactions are less pronounced as fewer consumers notice, although when they do they may think of the brand as being dishonest – so there is a risk attached. The real lesson for consumers is to compare price per pound or unit when in store, which some retailers display on the shelf edge.

Not cool. I understand they want to keep prices where they are in many cases, but come on – a bag of plantains I purchased the other day for $6 was less than one-third full! Yes, it’s NYC, but it was a small bag and I felt cheated and would never buy the brand again. When will manufacturers give consumers a break, at least until inflation starts to level out?

Will they increase the size when inflation ebbs?

Size reduction is a stealthy way to increase prices. They bet on no one noticing. Do they then boast, “We haven’t raised our prices?”

If input prices rise, then those costs are passed directly from suppliers to manufacturers and eventually to sellers. This is the price, take it or leave it. Then the sellers try their hardest to pass those costs on to customers. If they succeed, everybody agrees it’s a huge win because the companies have protected their profit margins and served their shareholders and executives.

But then, if the customers demand higher wages to pay for the higher prices, this is an unthinkable disaster called a wage-price spiral.

CPG companies, raise your prices appropriately and increase the wages so people can afford them.

Gene, your question reminds me of a paradox I’ve been trying to resolve for decades now. If apparel manufacturers charge more for “plus” sizes and “big and tall” goods because “they require more material,” why don’t they discount petite and XS size goods? Still pondering that one.

Will they increase the size when inflation ebbs? Altho I’m sure this was meant facetiously, I think you illustrate a common misperception: falling inflation means falling prices (deflation); it doesn’t of course … the (new) prices are still the highest they’ve ever been.

Shrinkflation has been around for many years and now with increased inflation on product ingredients, it has accelerated and people are noticing. As consumers, I think most of us notice the practice and, for the most part, accept it as we know what is driving the strategy – inflated material costs. One way that consumers can evaluate their grocery purchases is to compare the price per quantity (in ounces or pounds) where price labels include this data.

Consumers aren’t stupid. Shrinkflation is a common practice and has been for years, but it’s a terrible way to try to build trust or brand loyalty. As to the response, there still is no excuse for cheating the public, and that’s exactly what they are trying to do.

I remember, maybe decades ago, when one of the breakfast cereal manufacturers shrunk the contents of their boxes. However they did not shrink the size of the box.

The alternative to increasing prices outright is by reducing the product size while keeping the price the same; a practice which I call deceptive.

CPGs need to be really careful when considering shrinkflation. It’s safe to say that as much as consumers don’t like inflation, they are more adverse to shrinkflation. Inflation feels transparent and consumers are used to prices fluctuating due to channel, retailer, promotions, etc. but inherently don’t like it when one package once worked for their recipe and now they need to buy two. On top of that, when a national brand chooses to go the shrinkflation route, it gives retailers one more avenue to offer better value on their private label brands. CPGs and retailers alike need to be very careful and use the right analytics to best understand where they can and can’t make adjustments on package sizes and pricing. When brand loyalty is at an all-time low, it is critical to fully evaluate all options using the best predictive and consumer based analytics and to not just chase margin – consumers are watching!

Inflation is already frustrating consumers. CPGs shrinking the size of their products, I think, will accelerate that feeling. They will notice, and it will affect brand loyalty. Then again, high prices also motivate brand switching. I do wonder how mad all the home chefs, who have recipes geared to 14oz cans of this or 12oz bottles of that, will feel about this.

“Shrinkflation” has been a growing practice long before genuine inflation became a problem. (I’ve noticed it in several of the CPG items I buy regularly.) In some cases, it’s so obvious that nobody is fooled, and the CPG companies are betting on consumer loyalty to specific products and brands.

If the topic has been surveyed, I’m wondering if most shoppers would prefer paying a little more for the “regular size” instead of the deceptive practice of “shrinkflation.”

This has been going on forever. Is this the excuse of the day? I’m really pretty fed up with the excuses we’ve heard over the past three years about the cause of out-of-stocks (hoarding by consumers) and the lack of truckers that frustrate and gum up the supply chain (hint: if you pay them, they might stay around).

We actually have more important matters to discuss, but this is a complete red herring. When a CPG manufacturer shows me a loss of profits, we can talk.

I have not seen any shopper studies on this topic, so I can only speculate as a consumer. It ticks me off to see less product in packages. I can understand higher prices though.

At our house we call these smaller containers “cheater packs.” Consumers aren’t fooled, and it seems that, once the package is shrunk, it doesn’t go back to its former normal. CPG companies should tread carefully here.

I have an unpopular opinion based on the other responses here but last time I checked, selling products to consumers takes a partnership. Retailers and brands need to work together to maintain the trust of the consumer. It’s an easy thing to dump on brands and say they need to take a hit on margin, but how does one navigate a cost of a container going from $4,000 to over $18,000?

Shrinkflation is commonly a brand’s response to a retailer refusing a price increase. There needs to be a balance here. Retailers and brands need to have the right conversation to safeguard the consumer.

Some ideas make more sense than others — since volume is cubed, even a tiny change in dimensions can make a big difference in size — but for items where people are used to “getting a certain amount out of” (a package), I doubt the attempt at sleight-of-hand will work. OTC, if accompanied with a price increase –either now or soon after — it may make people even more annoyed.

CPG companies are currently in an acknowledged no win situation. While the rationale may make P&L sense, an ethical issue is lurking. If consumers feel deceived (outcome), it matters little what was the intent. Look beyond the immediate profitability impact.