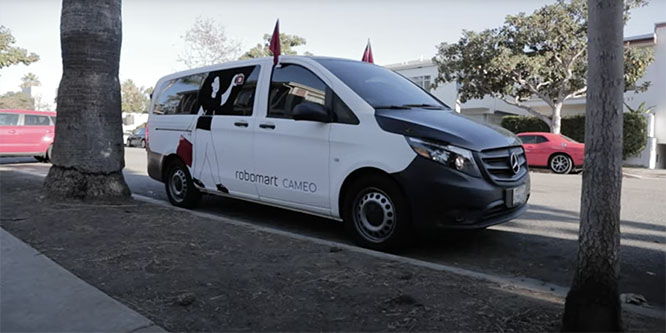 Startup Robomart, which a few years ago was working on a fully-autonomous mobile grocery delivery vehicle, has pivoted slightly to become what the company is calling a store-hailing platform. The Santa Monica, CA-based startup is touting store-hailing as the first new channel created in the retail world since e-commerce and anticipates it will create as big of a shift as the advent of e-commerce in the 1990s.

Robomart users can use a smartphone app to browse the selection in a given mobile store, which consists of a van stocked with product, according to the Baltimore Sun. They can then order the mobile store to their location (“hailing” it like a rideshare), use their smartphone to unlock the door and remove products which are automatically charged to their account.

Robomart has a pharmacy mobile store which will be going live after a successful pilot, as well as grocery and ready-to-eat snack stores which it plans to deploy in Los Angeles soon.

Unlike other similar solutions in the mobile delivery space which have focused on autonomous delivery vehicles, this iteration of Robomart is operated by a live driver (who plays no role in the transaction).

The company has a headquarters planned to open in Baltimore over the next three years, from which it intends to launch an East Coast expansion.

While Robomart is not the only company working on non-autonomous mobile marts, many of them have been less tech-enabled and geared toward residing in one or more specific locations, rather than being called from place to place on a per-order basis.

Others take slightly different tacks, like Vendamarts, a mobile grocery solution from Carts Blanche based in Mobile, AL. Vendamarts consist of a trailer that can be fitted with up to 10 vending machines, including ones storing refrigerated/frozen products, and placed in an area to allow customers to queue up and serve themselves.

DISCUSSION QUESTIONS: Do you think there is a business opportunity for “store hailing” concepts to succeed? What do you see as the challenges and opportunities around such a concept?

Please practice The RetailWire Golden Rule when submitting your comments.
Braintrust
"Another great innovation. With the right context and use case this may be successful."

"Take 10 people, with 10 shopping lists and multiple preferences for products among those 10 people. How could their selections be fulfilled with one vehicle?"

This could be a very convenient service for people who quickly need the odd item. However I would love to see the metrics around frequency of use, average basket size, and cost per transaction. Those will be key to making this a viable service and without getting them into solid territory, I can’t see this as being a very profitable venture.

Robomart and its peers present an interesting concept, but I struggle with the problem they are solving. It’s almost – but not quite – home delivery. Since it lacks the ability to get to the door it’s not a solution for the truly homebound. Maybe the van should play music when it drives through the neighborhood to alert residents?

This whole idea seems like a logical extension of the convenience driven mind set of today’s consumer. My question is about content and critical mass. Can a van carry enough breadth and depth of product to make it work? What kind of sales per mile traveled and sales per hour and sales per transaction does it take to be profitable? It’s an interesting new model. I love the experimenting that’s taking place.

I have the same doubts based on the maximum product mix that could be offered. Will there be a minimum purchase required? This concept may morph into something more practical than what it initially seems.

Take 10 people, with 10 shopping lists and multiple preferences for products among those 10 people. How could their selections be fulfilled with one vehicle?

Sounds like Jeff Weidauer and I have similar reactions. This idea feels very much like a “hailable” ice cream truck. There is some novelty to this idea but, otherwise, I think more lasting appeal – similar to the drone delivery idea discussed here recently – will be for prepared foods (e.g. ice cream and pizza!) rather than for groceries and sundries.

Riffing off your idea, Dave – you’d probably get critical mass with a mobile liquor delivery truck, with enough safeguards to ensure only registered and verified buyers could pick up, so that you could zero out frat houses and problematic neighborhoods.

Hadn’t thought of that, Scott — but I agree booze could be a “killer” use case for this.

It is an interesting take, but the use and adoption will be limited to a few situations. It will be as popular as mobile libraries – which is not very.

I suppose this is a good idea for people who can’t run to a local store or cannot wait for delivery. I wonder how much you will have to pay for an item: grocery store pricing or hotel gift shop crazy markup? I also worry about the safety of the driver. Store hailing is something I might do occasionally, but only in an emergency. And I don’t think I am alone.

This is sort of harkening back to book mobiles or ice cream trucks. If these vehicles could follow specific routes and times and become predictable, demand may follow. Hailing them on demand could be much more erratic and create inefficient routes that make generating consistent revenue and profit difficult. However this could be a very useful application of technology to help solve food accessibility issues in food deserts, especially if standard routes and times are used. If the basic selection meets those needs, you could see a good use case and the ability to drive a profit.

In other parts of the world, convenience stores are basically storefronts packed with multiple vending machines selling everything from soup to nuts. Store hailing basically takes that concept and puts it on wheels. The future of convenience stores will likely be a mosaic of different models such as DTCs like GoPuff, traditional stores like 7-Eleven, vending machine shops as seen in Europe and store hailing vehicles, all fighting for the same market share.

Another great innovation. With the right context and use case this may be successful. For example, I could see this being helpful in beach communities with a lot of tourists that would require a more focused set of products. It may also be useful in a district with many businesses with similar convenience needs. However I echo the concerns of others on this store-hailing model about having enough assortment depth and attaining profitability in a neighborhood setting.

The classic retailing model has been for consumers to travel to a critical mass of products, with malls representing the ultimate efficient destination. Then technology-powered mobile retailing brought endless aisles of categories and products to the palm of your hand with multiple delivery and pickup options. Putting a limited assortment store on wheels is a further variation that combines access and delivery in a conveniently powered technology play. The model will become even more financially viable once true self-driving vehicles are available.

Store-hailing has a future as long as people continue to have last-minute shopping needs or are simply looking for more convenience. Traditional retail metrics of basket size and cost per transaction are less helpful for this concept. Profitability must follow establishing a presence and gaining market share. Analysis of each trade area with desirable density and demographics will combine with AI-fueled assortment and pricing decisions to deliver the winning formula.

I don’t know what the economics are of this program, but I have to think they need more than a four-item quick need to support the cost of this program. I didn’t find any up-charge for the service, nor did they mention if there is a price escalation on these items. MY response: “hmmm.”

What once was old is now new again. When I was a kid the produce man’s truck used to drive slowly down the street waiting for customers to physically run out and flag him (and it was always a him) down. The only problem was selection both in terms of quality and depth. By sticking with branded goods “store hailing” solves one of those problems, but still leaves the selection depth issue unaddressed. The potential upside is obvious, especially in under-stored urban markets and zip codes full of “senior” seniors who may not drive or young, affluent, hipsters who can’t be bothered going to the store. So the big challenges seem to be economics — how do you work out delivery charges flat rate or by mileage — and managing consumer expectations down to a level that can be met.

The convenience store model works quite well, stocks far, far more product, and really doesn’t need improvement. Is this another “innovation” we’re getting because it can made — not because anyone needs it? I fear it is.

In an era where foot traffic around major downtown areas will see a decline due to the work-from-home trend, retailers need to figure out creative ways to reach the customer anywhere they are rather than to only rely on their ability to come to them. In other ways, this is can be a great ancillary service to augment existing outlets by retailers.

I do want to point out that the concept fundamentally is nothing new, as kids are all too familiar with the ice-cream trucks that are always driving around tempting them. Also, this is a great way to eliminate the problem of food deserts.

So here’s the dilemma: how is this model scalable? The ice cream or produce truck has a model that attracts many individuals to the site. Kids run to the truck at the park or collaboration spot for crowds. In this model, individuals are looking at items and buying one item at a time — maybe at premium prices, but basket sizes are still going to be tiny.

Without large numbers of customers this model is a no go, and if large numbers become interested, how will they now get the immediate delivery promised while waiting on so many prior deliveries even with route optimization? Unless there are sales of high value goods (maybe pharmaceuticals can work with volume) just paying the driver alone will wipe out most earnings. In urban areas the value diminishes further.

Not sure about this concept.

I think there is something here, if we combine the innovations we’ve been hearing so much about: Drones, home delivery, store hailing, autonomous vehicles…. The problem with drones is “weight ratios” … fine if you need a stick of deodorant RIGHT NOW, but not so good for a full meal’s worth of groceries. Home delivery via a person driving a car or van is great, but the economics don’t really pan out for those daily shopping trips. Store hailing has the problem of limited SKU availability, and running out to the curb to make a purchase. What about optimizing self driving carts to make the deliveries? Small, efficient, autonomous … much cheaper than cars and much more capable than drones. Text me when you’re close, pull up to my house, drop a weatherproof container at my door and beep the horn!

I’ll approach this from the other direction:

What’s going to (really) revolutionize grocery delivery? Making money at it. So what do we need for that? Sufficient payload; minimal labor costs (ALL labor costs, not just what greets the customer), and reliable technology.

So how does this fair? I think it’s a step up from drones, but I question how useful the inventory levels are (or can be). It seems like the ones who should be concerned aren’t the Krogers of the country … but the 7-Elevens.

Braintrust
"Another great innovation. With the right context and use case this may be successful."

"Take 10 people, with 10 shopping lists and multiple preferences for products among those 10 people. How could their selections be fulfilled with one vehicle?"