Will wholesaling change L.L.Bean for the better? 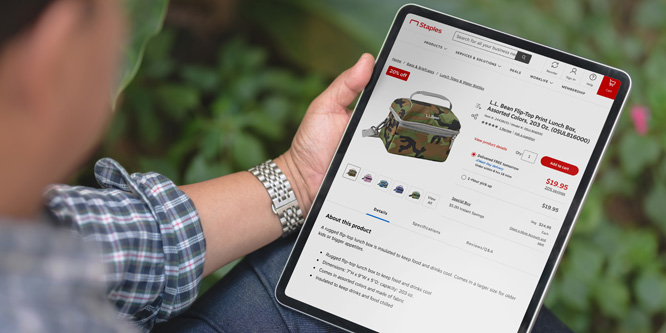 L.L.Bean’s heritage has always been selling its clothing and other outdoor gear in the U.S. directly to consumers, beginning with its very first mailer in 1912 and expanding through the years to include its website and standalone stores. That is about to change with the news that Bean has signed wholesale agreements to supply its own brand products to Nordstrom, Staples and the Scheels sporting goods chain.

The first destination for Bean’s products was Staples. The office supplies store has already begun selling Bean-brand backpacks, lunch boxes and water bottles in about a thousand of its stores and on Staples.com.

Nordstrom will begin selling the Bean Boot and other items identified with the L.L.Bean brand in about 20 stores in the fall as well as online. About a half-dozen Scheels locations in the Midwest will also carry Bean products as the seasons change.

Charlie Bruder, vice president of merchandising for Bean, told The Associated Press that his company sought out retail trading partners with similar business philosophies to its own. He pointed to Nordstrom and Scheels as two companies with traditions of customer service that mirror Bean’s business focus.

Bean’s move into wholesaling doesn’t mean that it is abandoning its core business. While online sales have performed well in the pandemic, Mr. Bruder sees Bean’s standalone stores as a difference maker.

“When people come into our stores, our staff is incredible. There’s no substitute for that,” he said. “We want to continue to have a thoughtful expansion plan.”

Yesterday, Bean announced that it will open three new stores under its banner in the Canadian province of Ontario before the end of the year. The stores are part of a partnership that Bean signed with Toronto-based Jaytex Group in 2018. The deal included wholesale distribution, a dedicated website and standalone stores. Bean products have been sold in a variety of Canadian third-party stores, including Hudson’s Bay, Mountain Equipment Co-Op and Sporting Life.

The Bean brand had a history of strong consumer-direct sales in Canada before making the move north with Jaytex. The company first launched a Canadian website two years ago before opening its first store in the country last year. Bean decided to open three new stores instead of two this year after the initial response from Canadian consumers, even during the pandemic downturn, was stronger than anticipated.

DISCUSSION QUESTIONS: Do you see wholesale relationships with other U.S. retailers as a positive or negative for L.L.Bean’s brand and business overall? What will be the keys to Bean effectively managing the balance between its standalone and wholesale businesses?

Please practice The RetailWire Golden Rule when submitting your comments.
Braintrust
"I think it’s a good idea. Better than incurring the cost of opening its own stores, and enhancing the brand of the stores it’s actually in."

"I see it as a positive. It allows L.L.Bean to expand the number of locations it can sell its products far beyond its own stores."

"In a wobbly market, they are moving forward in a focused and prudent manner in an attempt to reach more customers."

12 Comments on "Will wholesaling change L.L.Bean for the better?"

If the products being offered via wholesale are limited in number and scope then this is a solid way for L.L.Bean to generate some incremental revenue and to increase its brand exposure. However, I would caution against selling an expanded range via wholesale, either now or in the future. L.L.Bean’s brand strength comes from careful control of its products and the way in which they are sold. Diluting that by ceding rights to other retailers is potentially damaging, especially if they undermine the quality and provenance of the brand and make it more ubiquitous. It’s also going in the opposite direction to market trends where DTC firms are seeing a strong rise in sales and companies like Nike are trying to increase direct distribution.

I agree. L.L.Bean’s strategy to adjust the SKUs to the type of store they are partnering with provides the host retailers with items their customers want and limits any dilution of their brand.

The decision to go wholesale is counter to what most iconic brands (e.g., Nike) are doing. It’s far more likely that the L.L.Bean brand will suffer. Being in Staples stores next to Jansport will increase distribution, but dilute the brand overall. L.L.Bean has strong roots in DTC and might be better served by sticking with that.

This is a positive move for L.L.Bean. They picked retailers that have a brand promise consistent with their own. In a wobbly market, they are moving forward in a focused and prudent manner in an attempt to reach more customers. They are being focused and disciplined. Lots of retailers and brands could be taking notes.

I see it as a positive. It allows L.L.Bean to expand the number of locations it can sell its products far beyond its own stores. As long as they don’t over expand into retailing that does not fit their image, it will be a positive. Managing the balance means maintaining pricing across online, catalog and retail stores. If the wholesale relationships are extremely successful, you do have to wonder what will happen to their own stores.

I think it’s a good idea. Better than incurring the cost of opening its own stores, and enhancing the brand of the stores it’s actually in. I don’t see a big impact on L.L.Bean’s core business. It just feels accretive to me.

As long as there are agreements about pricing so as not to dilute the L.L.Bean website and stores, I think this is OK. However, part of the cachet of the brand has been scarcity — like when there was the run on their boots. They should be very cautious here.

If it is carefully done, this is a winner. Don’t get greedy. Don’t let it get out of hand. Look at it as exposure and trial. Make the product available to more people who, though they have heard about it, don’t think about it when they go online.

They want L.L.Bean, they like it. They want more. They buy direct. Simple. Easy.

But, very important, don’t lose sight of the purpose.

It is a smart and solid strategic move on several fronts if executed without sacrificing their key core values. On the positive side, it gives L.L.Bean a more diversified set of physical contact points with its consumers. Assuming they keep the product mix at retailers who are able to represent and execute values similar to the Bean core values they should not dilute or degrade their brand. Based on the limited mix of products being offered at Staples they appear to be doing this well. This is a win for L.L.Bean and the brands allowed to market the Bean merchandise as long as L.L.Bean is presented as the “high end” offering in the product mix. Possibly most importantly in the long run, It gives L.L.Bean that new physical contact point with multiple generations of consumers without having to open additional stores. This is probably a key component in a multi-pronged approach lowering, or stabilizing the average age of their customer and offsetting what has to be a shrinking (but very significant) catalog business.
0
|
0
-   Share

I think the key elements for L.L.Bean’s new ventures with retail partners must be selectivity and control of the manufacturing. Don’t allow others to slap the logo on licensed junk that will damage the brand’s quality perception. Select a few signature items for sale in Nordstrom’s shoe departments or offer custom-embroidered polo shirts through Staples. Package everything with a tag that invites customers to “find the rest” at the L.L.Bean online store. Provide some POP materials for your retail partners too, to further strengthen the brand.

L.L.Bean is a great, classic brand, and if they limit the products offered, select great partners with the right geo and demographics, and control their pricing, L.L.Bean could effectively increase sales and, more importantly, broaden their customer base by introducing new audiences to their brand.

Braintrust
"I think it’s a good idea. Better than incurring the cost of opening its own stores, and enhancing the brand of the stores it’s actually in."

"I see it as a positive. It allows L.L.Bean to expand the number of locations it can sell its products far beyond its own stores."

"In a wobbly market, they are moving forward in a focused and prudent manner in an attempt to reach more customers."