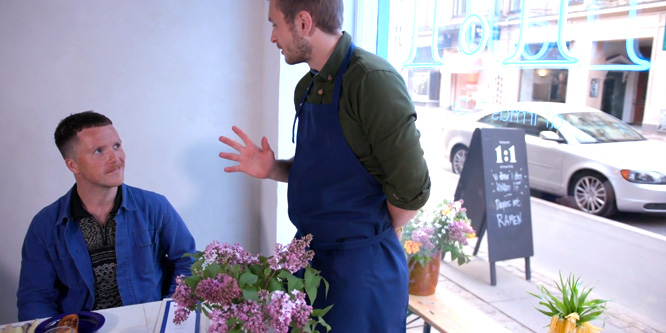 Irma, the largest supermarket chain in Denmark, recently opened a restaurant pop-up that serves only one person at a time in order to introduce its new single-person meals while reducing the stigma of eating alone.

Described as the ‘World’s Smallest Restaurant” and called Restaurant 1:1, the pop-up staffed one chef and one waiter to serve one diner at a time. The meals were free and reservations sold out in 48 hours.

The retailer created the pop-up to “prove the quality” of the new meals that were developed by popular Danish restaurants, according to Adweek. The pop-up was also designed to get people more comfortable purchasing single-person meals in a move that also helps reduce food waste.

“This project is a fun way to show that eating alone doesn’t have to mean you have to get less of an experience,” said chef William Melsted, according to Lad Bible.

The campaign underscores challenges grocers face addressing an increasing rise in smaller households and their smaller bite sizes. About 28 percent of households, or 35.7 million Americans, live alone today, up from 13 percent in 1960, according to the U.S. Census Bureau.

Supermarkets have traditionally aimed offerings towards families, including buy-one-get-one-free promotions and “family-size” grocery packs that provide an incentive to make bigger buys.

An article last month in The Wall Street Journal also listed shifting demographics and food waste as major reasons more companies are shrinking portions to cater to urban, single-person households rather than traditional suburban family units. WSJ research showed that, although individuals consume less, they will pay more to do so.

The Guardian reported on Tesco’s move last year to expand its range of single-portion foods, citing ever-shifting meal times in busy households as another reason more people are eating alone. The article also pointed to food waste and grocers’ traditional emphasis on bigger buys as hurdles.

“The way supermarkets are set up makes it almost impossible to shop for one,” Phillip Adcock, the managing director at the shopper research agency SBXL, told The Guardian. “We have been educated to buy more for less.”

Please practice The RetailWire Golden Rule when submitting your comments.
Braintrust
"Both grocery stores and restaurants have the services and capabilities to provide a good experience for the single shopper. "

"One may be the loneliest number but purchasing for meals for a single person does not have to be an onerous task."

"I think the 1:1 pop-up is a great way to bring attention to smaller portion size and less waste for ALL eaters."

Eating out alone or shopping for yourself is nothing new, especially in larger more cosmopolitan cities. Both grocery stores and restaurants have the services and capabilities to provide a good experience for the single shopper. The restaurant 1:1 offered by Irma, while a novelty, really is not a model that could be scalable or profitable in high rent cities such as NYC, where every square foot has to be maximized to its fullest potential. I just don’t see this taking off in the states.

In addition, with our migratory freelance economy, there are plenty of single eaters out there, who manage quite well by eating at restaurant bars, etc. When I am on the road, I’ve also appreciated what Whole Foods, H-E-B, Wegmans, etc. have done with their prepared foods section, that helps to not only eliminate food waste but also provide organic healthy food options at a good value.

Irma’s 1:1 restaurant should be view as a public relations gimmick to draw attention to their single person meals and not as a concept they intend to roll out. One may be the loneliest number but purchasing for meals for a single person does not have to be an onerous task. Being willing to prepare meals with the idea of having and eating leftovers will go a long way to solve the meal prep conundrum for a single diner.

As I am reading this, I am scratching my head.

First of all if I have a single night, I go to a restaurant and eat dinner, alone. When am on the road, I always eat dinner alone. Never am I given more than one portion.

Maybe this is because I live in New York City and it is different in the rest of the country, but when I think of prepared meals in a supermarket, all I think about is single serving. If it is a family of four, you get four single servings. Am I wrong?

I enjoy the many solo meals I’ve eaten over the years while on business travel, so no “stigma” for me! I think the 1:1 pop-up is a great way to bring attention to smaller portion size and less waste for ALL eaters.

I’m not sure what to make of the Irma “experiment.” Clearly it wasn’t practical as an actual restaurant and I think far from decreasing the “stigma,” by making a spectacle it may increase it. But of course it was a publicity stunt, and judged as such, a success.

But back to the core issue. Though I think most of us instinctively answer grocers and producers should “do more,” I’m hard pressed to say what that “more is.” Packaged foods often come in small sizes, frozen foods have long offered single servings (didn’t they start out that way?) and hot bars offer any portion desired. The only real areas I see that could stand improvement are in the oversized cuts of meats offered, and the selling of some fruits in bulk … but in the latter, of course, one runs up against complaints in packaging inefficiency with offering small sizes.

Delightfully goofy PR stunt. The success of Costco illustrates that shoppers will buy more than they generally need if there is “apparent value.”

Braintrust
"Both grocery stores and restaurants have the services and capabilities to provide a good experience for the single shopper. "

"One may be the loneliest number but purchasing for meals for a single person does not have to be an onerous task."

"I think the 1:1 pop-up is a great way to bring attention to smaller portion size and less waste for ALL eaters."