Would a fashion collaboration work for Starbucks? 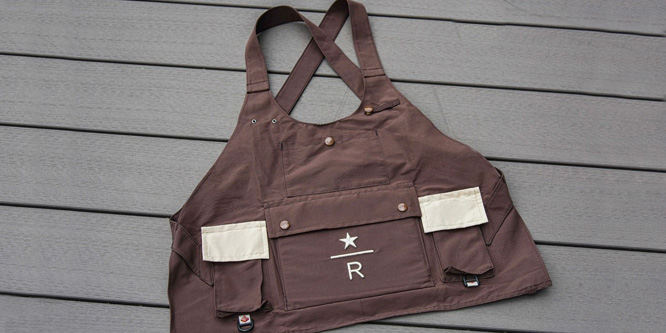 Starbucks may be fashionable in the U.S., but in Japan the coffee retailer is taking steps into the actual world of fashion with a line of apparel and accessories.

In the U.S., Starbucks has also had success creating collections of luxury accessories where one might not expect to see them.

In 2015, for instance, it released a line of gift cards decorated with Swarovski crystals which ended up selling out, according to Adweek. The gift cards retailed for $200 despite being loaded with only $50 of store credit. The collection also featured designer Starbucks thermoses.

Apparel and home goods, though, are a different breed of accessory than decorative gift cards or thermoses. The new Roastery collections raise the question if pricey apparel and accessories branded with Starbucks’ logo will feel less like high fashion and more like promotional swag.

Earlier in the decade, Starbucks U.S. made an attempt to build its connection to the apparel world. In 2011 it partnered with the CFDA/Vogue Fashion Fund to create a line of Starbucks-inspired, limited-edition designer t-shirts as part of the company’s fortieth anniversary celebration. The t-shirts were available both at Starbucks’ online store and at Nordstrom.

While Starbucks overseas has recently been working to build its fashion cachet, perhaps the biggest news from the chain domestically has been its move into another type of non-coffee offering. Last month, Starbucks announced the planned launch of a suite of cloud-based B2B solutions to enable other restaurants to build out and improve their digital offerings.

DISCUSSION QUESTIONS: Why would or wouldn’t having designer apparel and home goods collections available at the Roastery concept work in the U.S. market? What sort retailers not usually associated with apparel or home goods sales could benefit from such partnerships?

Please practice The RetailWire Golden Rule when submitting your comments.
Braintrust
"The zeitgeist is that you should try anything, which I agree with. Trying apparel in Japan (a very fashion-conscious nation) first is also a good idea."

"Loyal brand ambassadors in the U.S. would likely consume Starbucks’ clothes along with their coffees. Yet I agree with Lee Peterson: testing overseas first makes sense."

"I think the challenge of relevant brand extension vs. “swag” is critical here, with an emphasis on relevant. "

10 Comments on "Would a fashion collaboration work for Starbucks?"

The Starbucks brand is strong and so leveraging it to extend into other categories – coffee related or not – has a reasonable probability of success. Leaders like Starbucks are always looking to grow, and meaningful brand extensions like the ones described in the article are a good way to do this. The same can apply for other retailers with strong brands, like Lululemon for example which could extend into a category like health foods and likely do well. This all said, retailers pursuing brand extensions need to be careful to not over-extend their brands into areas or with partners where their brand could be damaged.

I see no reason why this could not work in the U.S. However, any retailer or brand launching such collections needs to differentiate and innovative. The one thing the U.S. is not short of is product: we have an abundance of things to buy and places to buy them. Any new entrant needs to be different and stand out; it can’t just coast along on the strength of its brand name if it has mundane or mediocre products.

The zeitgeist is that you should try anything, which I agree with. Fail fast. And for any food purveyor to try apparel in Japan (a very fashion-conscious nation) first is also a good idea. So nice try and why not? The whole “brand permission” idea is out the window (Apple sells jump ropes, FYI) anyway. But for some reason, my gut tells me that when Starbucks gets back home with apparel, it’s going to be “meh” at best. I can’t support that with data, just my sense of it.

To me, the “try anything” mantra works best with brands that have built a reputation on that belief already: Amazon, Apple, Supreme, Shake Shack, WeWork, Urban, etc. Applying those parameters to Starbucks — meh, maybe. We shall see.

I was actually really surprised there was no Starbucks Roastery branded apparel when I visited the Seattle store a few years back. Starbucks and more specifically The Roastery have cachet and therefore could generate good revenue from branded apparel or a partnership with a fashion brand. It’s a natural extension in my eyes.

Some merchandising crossovers make sense, and typically allow brands such as Starbucks to extend the experience beyond their coffee and cafe experiences. The Starbucks Roastery locations would be the ideal testing ground to experiment, innovate, and test product lines. Starbucks has already established a partnership with Spotify, and people could take their playlists with them wherever they go.

The home, health, wellness and lifestyle sectors offer significant crossover opportunities. Particularly, Patagonia, Lululemon, and even Whole Foods could experiment beyond their core offerings, and extend the brand via apparel and lifestyle partnerships.

A key consideration is to know that not everything is going to be successful or resonate with their core customers. Hence the need to pursue a piloted, controlled strategy.

With a strong brand reputation and a cult-like following, Starbucks could probably put their brand on almost anything and their loyal fans will buy it. While it isn’t for everyone, branded apparel and home goods should provide an incremental revenue stream for Starbucks. As Starbucks has saturated many markets with their store presence, they are looking for creative ways to boost revenues. They are fortunate to have a great brand, which creates many opportunities.

Loyal brand ambassadors in the U.S. would likely consume Starbucks’ clothes along with their coffees. Yet I agree with Lee Peterson: testing overseas first makes sense.

Beyond the Japanese market, China could make an ideal test market because “Made in the USA” is in demand there for the prestige and perceived superior quality of foreign products.

Also, as Chinese shoppers continue to grow in affluence, they are upgrading their consumption to more premium products, as the successful Starbucks Reserve Roastery in Shanghai proves.

I think the challenge of relevant brand extension vs. “swag” is critical here, with an emphasis on relevant. Certainly the Starbucks brand is powerful and wide-reaching, whether is this translates to relevance and authenticity for home goods and apparel is a slippery slope. I would advise caution….

Strong brands often see success when they launch products in adjacent categories. Examples that come to mind are Mont Blanc — they started with pens and moved into other accessory categories. Anthropologie is another good example where you see a lot more of the store focused on home goods and lifestyle vs. apparel. As long as the brand does not veer away too much from their core offering, there is opportunity to capture margin on additional categories through a strong halo effect.

Braintrust
"The zeitgeist is that you should try anything, which I agree with. Trying apparel in Japan (a very fashion-conscious nation) first is also a good idea."

"Loyal brand ambassadors in the U.S. would likely consume Starbucks’ clothes along with their coffees. Yet I agree with Lee Peterson: testing overseas first makes sense."

"I think the challenge of relevant brand extension vs. “swag” is critical here, with an emphasis on relevant. "