Aldi fans can’t wait to shop its ‘Aisle of Shame’ 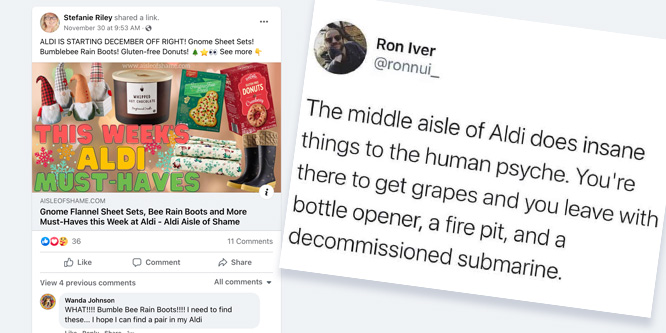 The appeal of the retail treasure hunt is the bread and butter of retailers like T.J.Maxx, but it usually is not a factor for customers when they are literally buying bread and butter. An impressive number of grocery shoppers at Aldi, however, are such fans of the discounter’s odds and ends aisle that they have given it a special name — and started Facebook groups to celebrate it.

The so-called “Aisle of Shame” (AOS) at Aldi’s has achieved such a level of Facebook fandom that Atlas Obscura reports members of one popular Facebook fan group have even invented a special “call” to signal to each other when they are in the store and shopping the aisle. It is not clear if the characteristic “caw-caw” of the AOS Facebook group member has ever been observed in the wild. But a Facebook search reveals numerous AOS fan groups, some with members numbering in the thousands and some with counts in the tens of thousands.

The AOS is presumably named for the guilty pleasure that comes with shopping the hodgepodge discount aisle. Fans use Facebook groups to post pictures of the strange or price-savvy finds they snag from the aisles, the assortment of which is rotated weekly.

The aisle, which Aldi stocks with an assortment split 50-50 between food products and non-food and, Atlas Obscura reports, is a known source of sales for the retailer. Retail consultant Nils Brandes, who has written a book about Aldi, says the aisle is responsible for about 20 percent of the retailer’s sales per year.

The Germany-based discounter has continued to build a fan base in the U.S. as it has pursued a huge expansion of its stateside footprint in recent years.

Once famous for its spartan store layout and no-frills/no bags shopping experience, Aldi has not ignored the U.S. trend toward customers — even discount shoppers — favoring higher-end grocery shopping experiences. In recent years the chain has given its locations a more wide-open feel and has expanded its range of organic and fresh foods. It has also built stores significantly larger than its standard concept in some markets.

DISCUSSION QUESTIONS: Should Aldi take a hands off approach to its aisle of shame fandom or should it be more hands on, from a marketing perspective? Is this merchandising approach something that could work for a wide variety of retailers or is its utility limited to price-focused merchants?

Please practice The RetailWire Golden Rule when submitting your comments.
Braintrust
"Customers like the treasure hunt. Leave it as it is."

"The fact that this has caught on so well is a good indication that Aldi is doing something right. Leave it alone and enjoy it while it lasts."

"I think that Aldi understands human psychology and its contradictions."

As the saying goes, “If it ain’t broke, don’t fix it.” Authentic, user-generated content is the gold standard of promotion. Aldi has already achieved meaningful engagement and promotion without any intervention other than smart merchandising and assortment management. I would recommend they just keep on doing what they’re doing – and not doing…

In terms of the fandom, Aldi should allow this to grow organically. Doing anything too corporate will spoil the spontaneity and authenticity. The best thing for Aldi is to keep finding and providing bargains for the middle aisle – some of which, like their egg chair, go viral and become massive sellers. Would this work for other retailers? The principle of “limited” time products which creates scarcity and urgency would work for most. Offering deeply discounted products would need to be more aligned with a value proposition to work well.

Seriously – how could Aldi possibly think about messing with this gift. Your shoppers love it – don’t mess with it. Just keep on doing whatever you’re doing and resist the urge to fix it or improve it.

The instant that “treasure hunt” can legitimately be applied to a retail shopping experience is a winning moment. It creates an “I want to go to the grocery store” mentality versus a “I have to…” mentality. Not many grocery stores can say that. Sounds like a much more creative approach that the current “seasonal” approach taken by my grocery store. That aisle is predictably boring and easily avoidable. Aldi has created a go-to location. Predictable unpredictability is under-employed by so many retailers.

A quick tour of Facebook search revealed dozens and dozens of groups that are in love with Aldi’s Aisle Of Shame. It’s clear that people are excited about it.

Trying to manage those groups would be a logistical nightmare, and not even possible because they belong to the individual admins who created them. Sure, Aldi can start an AOS online presence of its own – and maybe it should – but leave the rest alone. It’s another story if the posts begin to turn on the retailer, but right now it’s a love fest. Why ruin the fun of people who are clearly fans?

The Aisle of Shame is all about discovery. And deals. As an aisle of stuff at deal prices, it stops customers in their tracks. That’s been proven by the banter on the net about this incredible deal aisle. I think it is a powerful plan to pull more and more customers to their threshold, and back again and again. It’s an experience that also will create footsteps in all aisles. What could be wrong with that? Nothing!

I had not appreciated that the “Aisle of Shame” moniker had been adopted. Aldi’s center aisle is not a new thing, nor is it unique. Lidl have a similar approach and Tchibo coffee shops in Germany have theme weeks with different types of merchandise to bring customers in. The approach works in both directions – cross selling non-food to food customers but also driving customers into the store based on merchandise that is available – for example advertising highly seasonal products (ski-wear, Christmas decorations, holiday/vacation essentials).

To drive customers into the store, careful coordination is needed to place themed merchandise into the store and advertise accordingly, thus creating a “get it while you can” approach – otherwise it is a purely a random selection of merchandise.

Customers like the treasure hunt. Leave it as it is.

This is influencer authenticity at its finest. How many brands and retailers pay millions of dollars to achieve something this popular that Aldi is earning organically and for free? To bring actual marketing people into this would destroy what is clearly a much loved experience for Aldi shoppers. Let the people have their fun and keep corporate hands off.

Communities are started by consumers and need to be listened to and left alone. Networks, like loyalty programs, are created by retailers and can, and should, be manipulated. I say if Aldi is doing 20 percent of its sales out of the AOS, leave it alone. As the old saying goes, “Pigs get fed. Hogs get slaughtered.”

Aldi normally appeals to price conscious consumers. Retailers appealing to other consumer groups would need to use this approach with caution. Whether and how Aldi should promote the AOS depends upon why consumers love the aisle. If they love the AOS because of low prices, then the overall low price message does not need to be changed. If consumers love it because of the hunt and the surprise, Aldi needs to be careful about promoting what is in the aisle because the element of surprise would be lost.

The fun in this for consumers is that they discovered it and they own the culture surrounding the “Aisle of Shame.” If Aldi tries to brand it or take control of it, the fun will fizzle for consumers.

If you’re lucky enough for consumers to love and promote your brand and offerings, take a hands off approach! Authenticity resonates with other shoppers.

It’s ironic that most people shop Aldi for sensible pragmatic reasons, low prices, and good value, and yet shoppers are enticed about the novelty items in, “aisle of shame.” I think that Aldi understands human psychology and its contradictions. Aldi, of course, should continue to pursue this aisle, but not expand it, in terms of space. Other retailers don’t often try to imitate Aldi, however, this will be an exception.

What a gift to have this following as a value-focused retailer. Aldi should continue to do what they are doing while also continuing to mine what customers most like about the treasure aisle. This can’t be directly replicated, each retailer will need to find its own way and approach to creating a treasure aisle or area of engagement.

There is something special about the organic rise of Aldi’s “Aisle of Shame.” It is authentically from shoppers, not manufactured marketing and likely, hard to duplicate. Therefore, it is best left alone for fans to revel in, derive and share their own experiences.

The best thing Aldi can do is to stay true to the origins and intent of this aisle and leave the rest to their “fans.” The fact that this has caught on so well is a good indication that Aldi is doing something right. Leave it alone and enjoy it while it lasts.

Braintrust
"Customers like the treasure hunt. Leave it as it is."

"The fact that this has caught on so well is a good indication that Aldi is doing something right. Leave it alone and enjoy it while it lasts."

"I think that Aldi understands human psychology and its contradictions."