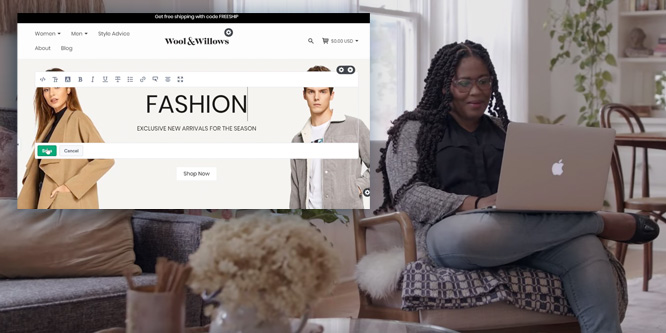 Selz, which operates in a similar space to Shopify, was founded seven years ago in Australia. Founder and CEO Matt Rushe announced on a company blog last month that his company had agreed to be acquired by the retail and technology giant. An Amazon spokesperson confirmed that the acquisition had been completed, according to a CNBC report.

Mr. Rushe’s blog post did not offer any insight into “what’s next” under Amazon. He wrote, “Nothing is changing for our customers at this time, and we’ll be in touch with customers as and when we have further updates.”

The Selz acquisition appears to be a good fit for Amazon, which is increasingly dependent on third-party sellers to drive its top and bottom line performance. Marketplace sellers, which now account for more than half of Amazon’s online sales, posted record numbers during the holiday season.

Shopify, which offers tools for businesses to build and manage online stores, reported that its business and that of companies that use its platform produced record results in the past fiscal year. The online platform also made headlines when it signed separate deals with Walmart and TikTok in 2020 to give its sellers greater exposure via the former’s online marketplace and the latter’s immensely popular video app.

Shopify executives, who have routinely eschewed the moniker of being the anti-Amazon in recent years, have clearly gotten Amazon’s attention. Third-party sellers using Shopify’s platform generated $5.1 billion in sales over the Black Friday/Cyber Monday weekend, topping the $4.8 billion of the businesses selling on Amazon, reports The Wall Street Journal.

Shopify reported its fourth-quarter and full-year 2020 results this morning, Revenues were up 94 percent during the holiday quarter and 86 percent for the year.

“Our fourth-quarter results capped off an outstanding 2020, thanks to the success of our merchants in a year that truly tested their mettle and triggered more entrepreneurs around the world to start their journey toward economic independence,” Amy Shapero, Shopify CFO, said in a statement. “Shopify was prepared to ship the features that our merchants needed during the pandemic because we had invested for several years in a future that arrived early with the acceleration of online commerce. We’re amplifying our efforts in 2021, as we focus on executing on a portfolio of initiatives that will fuel further growth for our merchants and for Shopify.”

DISCUSSION QUESTIONS: In what ways do you think Amazon is likely to respond to Shopify? How do you see the Selz acquisition playing into that?

Please practice The RetailWire Golden Rule when submitting your comments.
Braintrust
"I suspect that Amazon had been studying and developing this type of offering for years and found that the best investment was to just buy it."

"As third-party sellers become a larger part of Amazon’s revenue, I suspect Amazon will provide “incentives” for those sellers to use Amazon’s platform – Selz."

"Shopify has a huge lead – one which may be insurmountable for Amazon. It will be an interesting battle to watch."

There’s no question Shopify has made a mark by focusing on very small and new businesses. And while Marketplace is significant, the success of Shopify makes clear that there are still opportunities with very small business looking to get online. This could be nothing more than classic build vs. buy for Amazon, in which case the Selz acquisition fits the bill. It will be interesting to see what Amazon actually does with Selz, which could range from nothing to “look out Shopify.”

Amazon has a key edge which will be of concern to Shopify: The ability to get products from online stores onto Amazon.com. That said, Shopify has a huge lead – one which may be insurmountable for Amazon. It will be an interesting battle to watch.

As I wrote a few days ago, when we discussed aggregators, “in the end, Amazon doesn’t want to be a retailer, they much prefer to be a mall. If that is the Amazon long-term strategy, this fits perfectly.”

This too fits Amazon’s long term strategy perfectly. It is a win-win for Amazon and the small and medium size businesses. Amazon will provide these businesses with the online power they need, the critical mass Amazon offers and the resources to more deeply develop the scope of the offering to the businesses.

I suspect that Amazon had been studying and developing this type of offering for years and found that the best investment was to just buy it.

As third-party sellers become a larger part of Amazon’s revenue, I suspect Amazon will provide “incentives” for those sellers to use Amazon’s platform – Selz. Free shipping, returns, reduced commissions, even stocking could all be part of Amazon’s strategy. Another incentive could be free website insight integration and/or hosting. They are all certainly within Amazon’s capabilities and horsepower.

Meanwhile, Amazon is watching Shopify and its partners (including Walmart, TikTok and Facebook) to map out longer-term moves for an entertaining, seamless online experience. Amazon definitely has a plan to conquer competitors and endearing SMBs is one key success factor.

Right up until Amazon contracts for private-label knockoffs on items with interesting volume and economics, based on the data they skim from Selz. Shopify won’t be creating product to directly compete with SMBs, and that’s a big (maybe THE biggest) appeal.

The Amazon acquisition of Selz fits nicely in their diversification strategies. Shopify certainly has a head start and a clear competitive advantage. However it won’t be long before Amazon becomes a force to be reckoned with in the independent retailer digital commerce marketplace.

The natural synergies and economies of scale will certainly pick up as the Selz platform members could take advantage of being part of the larger Amazon commerce platform. This acquisition also enables Amazon to collaborate and partner with smaller, indie retailers, brands, and creative operations. It will be interesting to see how this plays out.

I’m not so sure this acquisition is a big deal. I doubt Amazon is going to relaunch an “Amazon Webstore 2.0” service globally and, even if they do, they probably didn’t decide that 45 person company in Australia had any IP or tech capabilities that Amazon didn’t have internally.

More likely, this acquisition was a local move to help Amazon in the Australian market. Did Amazon feel that potential third-party sellers in Australia would also insist on a native e-commerce site, and didn’t want to abdicate the Australian market to Shopify (as they did the U.S. market in 2015)? Does Selz have a customer base that Amazon wants to market to (to convert to third-party Amazon sellers)? Did Amazon need some help accelerating the third-party seller ecosystem in Australia?

This further solidifies Amazon’s business model of being truly omnichannel and to dominate the ecommerce space. Amazon in Australia is still relatively small and its FBA offering is equally minimal, so the location of Selz will also not be just by chance.

Braintrust
"I suspect that Amazon had been studying and developing this type of offering for years and found that the best investment was to just buy it."

"As third-party sellers become a larger part of Amazon’s revenue, I suspect Amazon will provide “incentives” for those sellers to use Amazon’s platform – Selz."

"Shopify has a huge lead – one which may be insurmountable for Amazon. It will be an interesting battle to watch."