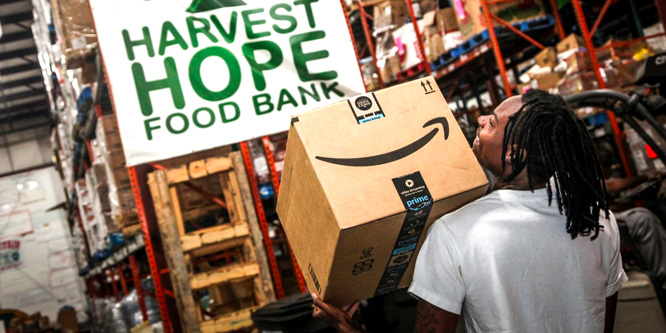 Retail titan Amazon.com has recently released and publicized a list of its stances on political and social issues.

Amazon posted a new informational page on its website labeled “Our Positions,” which lays out its stance on 11 hot-button issues, with a one-paragraph explanation for each. Amazon.com says that it supports:

Various groups and individuals have criticized Amazon over the years for engaging in damaging business practices. An article on the Jeff Bezos-owned Washington Post describes the “Our Positions” page as a rebuttal to these criticisms. Amazon has come under fire for its perceived failure to pay taxes, its partnerships with energy companies that are said to have a negative environmental impact, its big brother-esque collection of data (and the potential to extend this to next-gen technologies like facial recognition) and its reportedly poor treatment of workers in some of its operations.

Just this month, the company was targeted with a protest in Sacramento, CA by delivery center workers, according to The Verge. Employees at the facility claim their hours are restricted to part-time, with no healthcare benefits, no paid time off and limitations on non-paid time off.

Such disparities between the espoused company values and reality has led to the impression among critics that the e-tailer is being hypocritical or even smuggling in calls for Amazon-friendly legislation under the guise of social responsibility.

Other developments, however, show that Amazon could be taking meaningful steps forward on some of the issues raised by critics. For instance, the retailer recently began piloting Amazon Care, a high-tech medical care service for enrolled employees.

DISCUSSION QUESTIONS: Do you think it’s a good idea for companies to enumerate and explain political and social positions in the way Amazon has? How sold are you on Amazon’s attempt to position itself as a socially responsible company?

Please practice The RetailWire Golden Rule when submitting your comments.
Braintrust
"Another PR play by Amazon to deflect the increasing scrutiny they are receiving from the public and politicians."

"Reading the commentary, it occurred to me that our sentiments as a whole sound much like those expressed a few years back about Walmart."

"In my experience corporations generally do a pretty uniformly poor job of developing anything close to logical and coherent ethical standards."

I call BS. Until Amazon starts treating employees, even those that are part time, fairly, their positions sound hollow at best. Amazon needs to clean up their act before I would buy into their social responsibility claims.

As I said in this post on LinkedIn, retailers should take positions. I’m particularly encouraged about their stance on gay and transgender rights. Millennials are noticing and they’re voting with their feet.

Because of its size and success, Amazon comes under a lot of fire. As such, it makes sense to have a clear list of positions on key social and economic issues. In most cases, Amazon is clearly on the right side of history. That said, I don’t expect this to completely calm scrutiny or discontent: there will always be areas where people are dissatisfied with Amazon’s stance on various matters.

Another PR play by Amazon to deflect the increasing scrutiny they are receiving from the public and politicians. It may place Amazon under further scrutiny as the public watches to see if it lives up to its stated positions, or it could be a good move to explain why it operates the way it does. Time will tell if Amazon will live up to its bold statements.

Totally agree Liz. And, in their case, the downside of the scrutiny seems to outweigh the potential benefit — at least for now. Drafting positions on social issues is easy. Living up to them is quite a different thing.

I see more and more of the mega-retailers trying to influence consumers to gain favor, and no one does propaganda better than they do. Most of it is tied into the global warming hoax, and a pile of liberal agendas that alienate many people who see things much differently. Always take care of your customers, help out those you can in your community, and somehow navigate the many obstacles to stay profitable, and you hopefully will continue on with your business for years to come.

Actually, that’s not right. They aren’t trying to influence their customers — they understand theirs and that Millennials and iGens fear the increasingly warming world we are leaving them more than getting a job. Just like Nike understood their support of Kaepernick and Target and their unisex bathrooms. And the market responds. Know your customers and speak their values. Just like Hobby Lobby and Chick-fil-A have done for years.

I respectfully disagree, and leave it at that.

Commensurate with their social and economic impact, this issue-based position statement makes sense for large, highly visible brands and retailers. They make explicit what guides their actions. Nevertheless, the proof is in the eating of the pudding and in Amazon’s case, we have a long ways to go before the taste is as advertised.

Speaking of “addressing human-induced climate change” how does that square with the new Prime delivery standard of any price product delivered in one day or 30 minutes? Think about it, the environmental and human impact of pick, pack and delivery of a $5 set of pencils. Speaking of pencils, how does this address human (Amazon) induced climate change? I guess Amazon means what they say in their position statement on climate change, “Change” being the operative word. Oh I forgot gas, road wear and tear, traffic, disposing of packaging, third-party delivery services suffering under extreme delivery schedules, traffic accidents, etc. I’m curious, what is the environmental impact of drones? Does anyone know? All of this being said, Amazon customers also bear some responsibility for encouraging Amazon’s climate behavior.

Reading the commentary, it occurred to me that our sentiments as a whole sound much like those expressed a few years back about Walmart. Doug McMillon seems to be changing some of those less favorable opinions with a combination of well publicized action. Perhaps Amazon can/will do the same.

What’s interesting about this is that the more dysfunctional our government gets, the more companies/corporations are going to have to step in to help the people of this country that are not only widely their consumers, but their employees as well. Sad state of affairs, but if corporate leaders actually display a conscience, which has been a void in the past, it could be a really, really good thing.

So with Amazon and Walmart leading the way, we could be on the verge of something really good. Now all they have to do is pay taxes, like their customers and employees do.

Maybe it’s just my admitted bias as a recovering academic philosopher, but I think this is really dangerous ground. In my experience corporations generally do a pretty uniformly poor job of developing anything close to logical and coherent ethical standards. Publishing a list of “principles” may make for great PR, but that falls far short of an integrated ethical position. And demonstrating those same principles in practice is a much, much different story. So let’s take a mini sample of the list starting with two points: addressing human-induced climate change and supporting the energy industry. Do these two talking points tell us anything about where Amazon stands on issues such as fracking (championed by the oil industry); nuclear energy; opening up heretofore protected lands to drilling; or Amazon’s view of natural gas? Of course they don’t. And how do, “Facilitating access to technology for governments at all levels,” and, “Protecting consumer data under federal law,” line up? There are also several items on the list that are transparently self-serving including: “Having a corporate tax code… Read more »
3
|
0
-   Share

So, in short, you are saying this is a bad idea?

In short, I’m saying this is a perilous path. On the one hand companies are being increasingly required to take social, political, and moral stands. On the other, they aren’t very good at it and generally open themselves up to new areas of criticism and attack. Remember what those paving stones on the road to Hell are made of.

Do as I say, not as I do. Real leadership comes from right action.

Each company is faced with the decision of whether to hold true to the values they espouse or to sacrifice the wellbeing of their staff/customers for a profit motive. I encourage companies to come forth with their beliefs. But it rings hollow when their actions speak the opposite.

Modern consumers are willing to do their research. On multiple channels. If Amazon thinks they’re going to get away with posting values that they aren’t living up to there are plenty of publications, analysts, and consumers who will call them out.

Braintrust
"Another PR play by Amazon to deflect the increasing scrutiny they are receiving from the public and politicians."

"Reading the commentary, it occurred to me that our sentiments as a whole sound much like those expressed a few years back about Walmart."

"In my experience corporations generally do a pretty uniformly poor job of developing anything close to logical and coherent ethical standards."