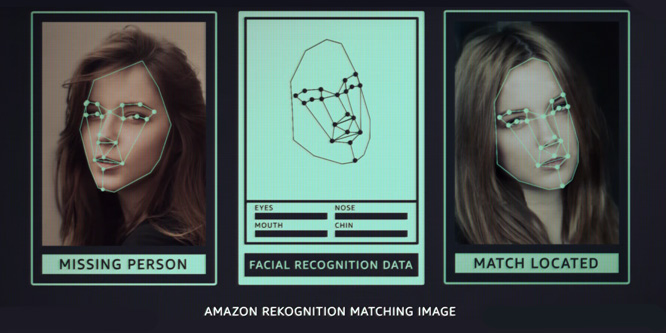 In unveiling its new hardware devices in Seattle on Wednesday, Amazon.com CEO Jeff Bezos made a surprise appearance and told reporters the company is working on facial recognition legislation that it plans to propose to lawmakers.

“Our public policy team is actually working on facial recognition regulations, and it makes a lot of sense to regulate that,” Mr. Bezos said. “It’s a perfect example of something that has really positive uses, so you don’t want to put the brakes on it. But at the same time, there’s also potential for abuses of that kind of technology, so you do want regulations.”

Amazon’s legislative ideas haven’t been revealed. In February, Amazon in a blog entry offered some suggestions including ensuring facial recognition tools comply with laws, maintaining human reviews to double-check findings and requiring signage where the technology is used.

Amazon’s Rekognition software, which debuted in 2017, matches photos and videos of faces with databases of other face photos in real-time.

For retailers, the potential positives include instant recognition of consumers as they walk into stores to provide highly relevant messaging as well as support of secure mobile payments. Law enforcement, airport security and retail loss prevention can use the technology to ferret out scofflaws.

Civil rights groups, lawmakers and even Amazon employees, however, are concerned about potential discrimination and civil rights violations if Rekognition is used by law enforcement agencies. Tests of Rekognition and similar technologies that showed biases have heightened concerns.

“If Amazon is really interested in preventing these dangers, the first thing it should do is stop pushing surveillance tools into our communities without regard for the impact,” Neema Singh Guliani, the ACLU’s senior legislative counsel, said in a statement. “Lawmakers should be skeptical of weak industry proposals that sacrifice individual’s rights in the interest of profit.”

A recent survey from Pew Research Center found nearly six in 10 respondents who have heard of facial recognition either do not have much trust (35 percent) or have no trust at all (23 percent) that technology companies will use facial recognition in a responsible manner.

Please practice The RetailWire Golden Rule when submitting your comments.
Braintrust
"Influencing the process from within is businesses-smart but it may backfire given Amazon’s size and dominance."

"If Amazon can recognize consumer benefit and lobby to keep the technology from crossing the line, I applaud them."

"It’s tough to imagine which entity American citizens would trust LESS with their personal privacy — the United States government, or Amazon."

Since there appears to be no coherent oversight coming from lawmakers, I think it’s a smart move for Amazon to help drive legislation on facial recognition. While I see the value of using facial recognition for law enforcement and security purposes, I’m more skeptical about how it will be used in retail stores and businesses generally. This will continue to be a controversial topic for years to come as society grapples with privacy.

It’s tough to imagine which entity American citizens would trust LESS with their personal privacy — the United States government, or Amazon.

Amazon’s lead in facial recognition can provide additional demand for its huge AWS business which creates even more funding for R&D and fledgling initiatives that further enhance Amazon’s size and moat.

A major hurdle to adoption is consumers’ opposition to potential abuses of facial recognition technology. Influencing the process from within is businesses-smart but it may backfire given Amazon’s size and dominance. My advice, tread carefully and get civil liberty-type organizations on your side.

Personally, I’d like to retain ownership of the decision of how and when I am known and unknown. I’d like to be able to walk into a store and be anonymous until I don’t want to be anonymous. Facial recognition is downright Orwellian.

I got news for you. Facial recognition is already in widespread use. Have you been through customs lately? Smile for the camera. It’s hard to see many of today’s lawmakers jumping on board and getting in the way of this as they can’t even control weapons of mass murder, let alone ID equipment that MAY (operative term) be beneficial. Nice try, Jeff, but you should probably stick to what you do best: selling stuff.

The operative word being “store.” One hardly expects to be anonymous going through customs.

Of course it makes sense for Bezos to suggest this and for Amazon attempt to present a fait accompli instead of allowing legislation to be developed.

That is wrong. The legislative process is also one of communication — where society learns about the issues and comes to general agreement on the rules.

It is also concerning because as with many things, Amazon has poor vision when it comes to what society needs — as opposed to what their bottom line needs.

All that said, there is a flaw in the Bezos plan. This makes them liable for holes in the legislation — at least in public perception. Should they really be taking on such complex territory? No.

Why will Amazon with its massive footprint use facial recognition? Citizen Amazon — owned by the richest man in the world — will now lend a hand to lawmakers, stepping in to write, lobby and create laws affecting millions of Americans’ privacy. Alexa are you listening? Under the guise of 30-minute shipping, Americans are lured into giving away themselves and their identities over to Amazon. For what possible business use cases? Convenience? Sure, yeah right, and I heard the cow jumped over the moon.

It is a self-serving move and — in this case — that is definitely NOT smart. Let’s look at this as objectively as possible. First of all, there is already a lot of facial recognition technology out there, from CLEAR stations at the airport to municipal solutions such as the one they are trying to launch, (to widespread opposition,) in Detroit. So this isn’t really “Blue Sky” territory. Second, the idea that Amazon — or any other single company — should be in charge of drafting regulations that potentially impact every man, woman and child in, or visiting, the United States, while benefiting themselves financially, is absurd. Typically these types of regulations are established with input from a wide range of vendors, users, and consumer protection groups. In this case — given some of the alleged issues with the technology — I would expect civil and human rights groups to be added to the mix. Finally, why would Amazon want to appear any more “Big Brotherish” than it already does? With people upset about their… Read more »
6
|
0
-   Share

This issue is problematic in many ways: accuracy is not high except for white males, there is potential for privacy violation, there is the possibility of editing pictures, and concerns about responsible use of data. Until accuracy is reliable, it seems early for legislation. However, it may be time to start thinking about rules and guidelines as the technology is developing. It is difficult to believe that Amazon would not propose legislation that would benefit their company more than the public good. Maybe more than one company or agency should be considering or proposing legislation.

Facial recognition is not new. It’s getting better and better. If it’s used to log in or expedite a shopping experience, I’m for it. That’s convenience. If it is to track where and when we go to surveil us, well that’s where the privacy line is drawn. If Amazon can recognize consumer benefit and lobby to keep the technology from crossing the line, I applaud them. The world is changing at a rapid speed. Things we only dreamed about years ago are coming to life. New laws and regulations need to be created. Welcome to a new world of retail – and everything else.

Years ago there was an uproar about cameras being located on buildings and street corners. Not only did it help to deter crimes; it in some ways prevented some traffic accidents. Now we are discussing facial recognition. It is on the way so let’s get used to it. It is eventually going to happen, isn’t it? It is a part of the path of progress.

Or it turns into a Xinjiang scenario, willingly aided right now by US hardware and software providers. The technology can be used for repression or liberation, but once the scale tips toward repression, there is no peaceful way out. That’s why we have to demand careful consideration here.

Maybe we can let the EU design the regulations.

Classic Amazon, thinking they can create yet another moat (barrier) where the competition (e.g. Alibaba) is already far ahead of what they are doing. Ridiculous — arrogance that not even a politician (regulator) would fall for.

Are we really talking about allowing one of the biggest companies––one which has already been accused of compromising customer information through the Capital One data breach–to monitor legislation for one of the technologies broadest-sweeping implications of our time? This isn’t safe, guys. Corporations aren’t supposed to legislate technology, mainly because it’s impossible to believe that the profit motive won’t override the interest of consumers/citizens. A hard “no” to this.

Braintrust
"Influencing the process from within is businesses-smart but it may backfire given Amazon’s size and dominance."

"If Amazon can recognize consumer benefit and lobby to keep the technology from crossing the line, I applaud them."

"It’s tough to imagine which entity American citizens would trust LESS with their personal privacy — the United States government, or Amazon."