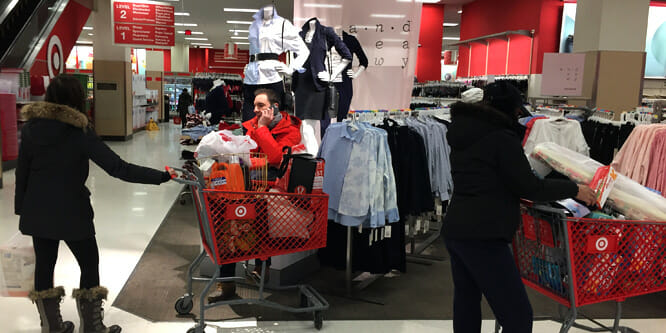 These days, into each retailer’s area of business a little Amazon.com must fall. In apparel, the retailer that is finding Amazon to be its most significant competitor isn’t Macy’s or even Walmart — it’s Target.

A survey conducted by Coresight Research found that 30 percent of respondents who had increased spending on clothes on Amazon last year had diverted some of their spending from Target, the Star Tribune reported. The study’s results are in keeping with the fact that there is a big overlap between Amazon Prime members and Target shoppers.

Target, which has had success in apparel over the years with the release of wildly-popular low-price designer collaborations, is likewise investing heavily in private label brands. Last summer the retailer announced it would launch 12 new private label brands within 18 months, according to Business Insider. This came after reports that Target’s Cat & Jack children’s brand had brought in $2 billion in sales during its first year on the market.

Most recently, the retailer has launched its Universal Thread brand, a lower-price, denim-centered brand for women, and a subscription box for Cat & Jack baby clothing.

Improving its private label apparel assortment hasn’t been the only change Target has made in pursuit of a rebound over the past few years. In 2016 Target began implementing small, flexible-concept stores to better cater to individual urban environments. In 2017 the stores proved twice as productive as traditional Target stores.

Opinions on the success of Target’s turnaround so far have been mixed. The company’s third quarter 2017 earnings report beat analyst expectations, showing a 24 percent increase in online sales and an increase in year-over-year store visits, according to CNBC. On the other hand, analysts noted slim margins and competition from Walmart and Amazon as concerns.

DISCUSSION QUESTIONS: How can Target improve its apparel offerings to win back share from Amazon? Even with its apparel success, should Target redeploy its efforts toward other segments in which it operates and worry less about trying to compete with Amazon in apparel?

Please practice The RetailWire Golden Rule when submitting your comments.
Braintrust
"If I Were Target, I would most definitely NOT worry about Amazon taking its business. I would focus on being the best retailer it can be."

"If it wants a successful clothing proposition, Target has to pull out all the stops."

"I’d like to see Target market products based on components/ingredients."

20 Comments on "Amazon’s apparel moves are wearing on Target"

Target has already made some improvements to its apparel offering with the introduction of private brands like Cat & Jack, A New Day and Goodfellow & Co. More, including Universal Thread, are coming this year.

The early signs are that these brands are popular: they have better conversion and sell-through rates and are helping Target to grow in clothing.

Where Target lets itself down is in in-store execution. Some effort has been made to improve visual merchandising of these new assortments, including new fixtures. However, standards are very hit or miss and, in many stores, the brands lack coherence and displays are messy.

If it wants a successful clothing proposition, Target has to pull out all the stops. Launching new brands is not enough.

Target consistently has a huge sales rack in women’s apparel, so it’s safe to say that they aren’t holding back on discounting. A lot of the clothing on sale at Target is made of 50 percent cotton or more, though, so I can definitely see how the margins are slim.

I’d like to see Target market products based on components/ingredients. Amazon is already doing this with its private label lines and it takes this type of transparency to appeal to today’s discerning customer.

Taking on the giant is never an easy proposition, and going head-to-head with Amazon’s assortments, pricing and promotions is an uphill battle. Target has already done an impressive job with their apparel selections, and their challenges are not necessarily attributed to their assortments.

The in-store experience is an area where Target could use some improvements. Customers will flock to the stores, especially Target where there not only are exclusive offerings and blockbuster deals, but a store presentation that is clean, clear, concise and makes a statement. The Target store will be a key differentiator for the brand. Having an educated, empowered and incentivized sales force is a significant competitive advantage.

Target’s unique positioning on bringing modern, exclusive products has helped them win in the marketplace. This ranges from collaborations with designers at good value to modern, trendy private label brands. They have been successful in apparel, and they should expand that concept to other departments like beauty. They brought Harry’s and Beauty Counter into Target which has helped them shape their beauty department. Their strategy will allow them to win as they take it to more departments. Additionally, they need to stay competitive online so they can win against Amazon and Walmart.

Target needs to be Target. Like in the past; synonymous in the past with fun fashion in everything from apparel to housewares, at a good price. Cool and hip fashion that can actually be purchased in a physical store on a whim. I hope Target leverages their apparel success into all product segments — which again could make Target a destination. Amazon lacks POV. Target is getting back its POV. At some point, as always, there will be a flip back to in-store shopping experience for the coolness factor of the in-store shopping experience. Watch out for Target.

Definitely agree that many Target clothes are purchase “on a whim,” especially from that sales rack, and especially when you are strolling by with your cart on a mission to buy something eminently more practical! I wonder how many Amazon purchases are spontaneous due to that row of recommended items that comes up on the site as you shop … seems like those Amazon recommendations would be less random compared to going to Target for batteries and buying a swimsuit.

“Those Amazon recommendations” are filtered through a process called collaborative filtering. Meaning, if you like this product, you will like these products because other people who liked the same product you liked also liked these other products”… a process that has no insight into the “3 D” dimensionalities of individual clothing selection. Missing entirely the subjective aspect of human apparel selection, an individual’s sensory preferences of fit, look and feel factors. Thanks for reaching out Elizabeth!

Retailers (even as large as Target) can’t out-Amazon Amazon and shouldn’t really even try. The shopping experiences are different, and with private label that brand experience can be different as well. There is plenty of room for a good in-store apparel experience (selection, price, convenience) which Amazon can’t recreate.

I guess I am very jaundiced, but we are given no real numbers here, so I’m not quite sure what to make of it.

The article specifically says: “The survey by Coresight Research (formerly Fung Global Retail) found that 30 percent of respondents who had spent more on clothing from Amazon in the last year said they had switched some of their spending from Target, making it the top retailer to lose out to Amazon in apparel. Macy’s and J.C. Penney were also found to be high up on the losing end in addition to Walmart and Kohl’s.”

Do we know what that impact equates to in real dollars? “Some” of their spending? Really?

If I Were Target, I would most definitely NOT worry about Amazon taking its business. I would focus on being the best retailer it can be, with the coolest stuff at a reasonable price, and private labels that resonate with consumers resonate. And get its fast-shipping house in order.

Kind of a matter of, “keep your eye on the ball and be successful” …

Completely agree, Paula. I looked into the study in a bit more detail and it seems the switching spend numbers are based on a sample of 446 internet users. That’s not a credible sample. What’s more, the switching question is qualitative. It’s not based on hard numbers or proper tracking of spend. I’m filing this under “PR fluff”!

Target didn’t earn the nickname “Tarzshay” for its grocery or automotive selection. It earned it by being a place where consumers could buy quality fashionable clothing at a reasonable price. While it continues to evolve its departments it can not afford to abandon apparel. The development of private label brands allows Target to offer high margin items at a lower cost. It needs to continue doing what it is doing but with a greater sense of urgency.

Amazon apparel makes it easier to be stylish — and save. Two factors give Amazon a massive advantage over Target: data and private label.

Amazon’s abundance of shopper data makes its personalized product recommendations more effective. The clothes fit our bodies and our budgets (and conveniently arrive on our doorstep). Linked with hassle-free returns, Amazon apparel is an easy, low-risk alternative to shopping in stores.

There’s a reason our closets are bursting with Amazon apparel: Cheap chic has never been more convenient.

For balance, I must say I miss Target’s presence in Canada. It lasted only two years. The girls’ apparel was the best in the biz. Cheerful employees seemed genuinely happy to work there. With apparel assortments bursting with color (and Starbucks kiosks), Target never felt like a discount retailer. Now Amazon is filling the gap here.

Target needs to use its physical (store) strength to compete. So many retailers are trying to compete with Amazon and maintain margins by reducing their overheads and killing in-store service. All this does is make a store visit far less attractive. Why go to store if there’s no help? Might as well shop online. Turning stores into click and collect depots is not the answer either. The problem is too many are trying to reverse engineer online digital into stores. If you want digital to work properly, it needs to be designed to start in-store.

Target and Amazon: same core customer. I’d be very afraid if I was Target too. The best hope, which is a tack Target is already on, is private label. But even if that is equal or better to Amazon’s offerings, the convenience factor still tips the scales to the 900 lb gorilla. Subsequently, Target needs to A) continue to focus on great PL apparel and B) massively improve the quality of their convenience — i.e. ship to home, BOPAS and BOPIS. Much to do, as Walmart will attest.

As Paula notes, another drama-rich but numbers-poor story. But does it really matter? Target may well be the biggest loser to Amazon or not, but it really doesn’t matter. There are plenty of clothing retailers out there, and Target competes against all of them. There’s no logic in singling out anyone in particular.

I think these new private labels will help Target compete with Amazon. Having more unique offerings and leveraging their physical presence will be key. Competing on price or number of SKUs won’t help, as Amazon already owns these. Instead, Target needs to capitalize on consumer favorites and give them more of what they love.

Some questions for you experts … it seems like I hear the most about Target with those aforementioned low-price designer collaborations. Is that because those are big moneymakers, or are those Lily Pulitzer-type collabs mostly about buzz while the real profits come from Target’s in-house labels?

Does Amazon do any similar low-price designer collaborations?

Also, there must still be a significant demographic who would shop at Target but not Amazon, correct? Or am I rare to have older relatives who do not trust online shopping?

Braintrust
"If I Were Target, I would most definitely NOT worry about Amazon taking its business. I would focus on being the best retailer it can be."

"If it wants a successful clothing proposition, Target has to pull out all the stops."

"I’d like to see Target market products based on components/ingredients."