Can a Supreme collaboration give Tiffany street cred? 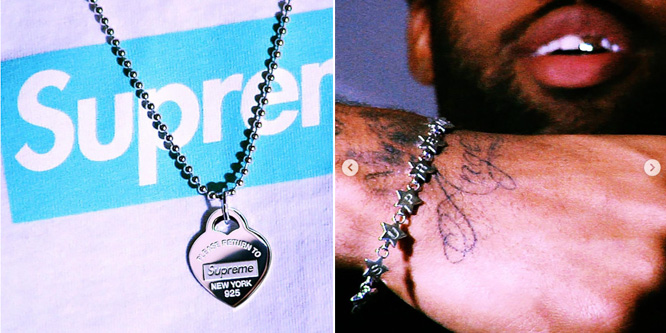 According to a social media post shared by both brands, the looks were “inspired by pieces originally launched in the 1960s” and blended Tiffany’s iconic sterling silver tag pendants, bracelets, studs and key rings with Supreme’s famous box logo. The tags on each piece have been updated from “Return To Tiffany” to “Please return to Supreme New York 925.”

Supreme, acquired last December by VF Corp, became streetwear’s powerhouse by initially collaborating with the likes of Nike and Vans but broke into high-fashion with a blockbuster tie-up in 2017 with Louis Vuitton, LVMH’s flagship fashion brand.

Since then, a number of surprise collaborations have found wild success including Crocs with Balenciaga, The North Face with Gucci, and Supreme with Japan’s Comme Des Garcons as well as Italy’s Emilio Pucci.

Since being acquired by LVMH in January, Tiffany has sought to diversify its clientele and reduce its dependence on engagement rings by partnering with celebrities such as Beyoncé and Jay Z, Hailey Bieber and Washington Wizards star Kyle Kuzma as brand ambassadors. The change was marked by a new tagline, “This is Not Your Mother’s Tiffany,” that angered some of the 184-year-old brand’s customers on social media.

Alexandre Arnault, VP of product and communications at Tiffany and son of LVMH chairman Bernard Arnault, was the former CEO of high-end luggage maker Rimowa, where he previously collaborated with Supreme on a $1,600 carry-on and formed successful tie-ups with Off-White, Bape, Dior, Anti-Social Social Club and Fendi.

Though successful, the Supreme x Tiffany collaboration further angered many old-school Tiffany fans. Of the more than 800 comments on Tiffany’s Instagram post on the launch, the majority were negative. One wrote, “This is atrocious. One company is everyday street wear and one company is a high end class act.”

DISCUSSION QUESTIONS: Are Tiffany’s limited-edition Supreme collaboration, celebrity partnerships and “Not Your Mother’s Tiffany” tagline the right steps for the storied jewelry brand? What advice would you have for Tiffany around reaching a wider and younger audience without offending existing ones?

Please practice The RetailWire Golden Rule when submitting your comments.
Braintrust
"Long established brands like Tiffany must be prepared to try new things to get to new customer groups."

"Some old money will object, but Tiffany’s updated strategy will deliver growth while projecting exclusivity wrapped in a unique brand proposition."

"This choice feels like too much of a risk considering that in order to retain the new consumer base they may have won, they’ll have to keep up the association with streetwear."

15 Comments on "Can a Supreme collaboration give Tiffany street cred?"

A move like this comes with risk. Tiffany’s move to expand its market is laudable, however dramatic shifts come with risk of alienating your existing customers and so the backlash shouldn’t be too surprising if not predictable. Tiffany’s needs to continue to carefully monitor their customer feedback, but to do so in light of the results the new offerings are delivering. The fact that their early collaboration produced interesting results supports the idea that this category may very well be worth the risk.

This kind of partnership gave Target a boost over competitors in the early days. Whether temporary or permanent, pacts like these bring fresh energy and interest. Imagine a partnership with Adele, or Drake. The sky’s the limit.

I think a company always needs to try new innovations to broaden their business and this includes collaborations.
Tiffany will see pretty quickly whether this will work or not.

I suppose Tiffany has forgotten how “Not your Father’s Oldsmobile” failed badly? Or how La-Z-Boy’s nearly identical effort to Tiffany’s effort today failed to deliver significant change. I’m saddened that they are following the lead of such craziness. Customer minds change slowly – attempting to force it all at once is unlikely to be a good idea.

This relationship? I can’t get past the poor fundamental idea – and the relationship is just part of that.

Limited-edition + a cool streetwear brand that can spark the younger buyer sounds like a great idea. But the brand has to be relevant. I am just not sure Supreme is as relevant as it was and the Shrek references + Skittles + Hype Williams collab + showcasing upcoming artists — some things work and some just don’t.

Tiffany and Supreme could hit the mark with the boxed logo on a return to Tiffany’s trinket but it could alienate the customer that is inspired by Jay Z and Queen Bey.

I am just not convinced…

There were collaborative partners they could have chosen that would have been disruptive, yet aligned with both past and future branding strategy. This choice feels like too much of a risk considering that in order to retain the new consumer base they may have won, they’ll have to keep up the association with streetwear. Streetwear is cool and relevant to young, trendy consumers, but now Tiffany has to continue to pursue edgy partners to maintain respect with this target audience.

This is one of the more interesting combos I’ve ever seen. Somehow, with two different customer bases and product that is worlds apart, the brand combo makes sense: both very exclusive and both on the high end of “cool.” I can see the customers’ acceptance of the other brand and the connection it brings. I get it, and think it’ll work and, at the very least, it is one of the best brand combo tests ever.

I like the collaboration, but I hate the tagline. My bet is the average Supreme customer is likely at least one generation removed from the traditional “Blue Box” consumer. I’d lead with power, not an apology. As to audiences, I’d say focus on the younger one. Tiffany already has enough older loyal customers and they aren’t likely to go away before they die off.

Collaborating like this makes sense to get to a younger audience – and by combining the names the risk of upsetting existing customers is small. Long established brands like Tiffany must be prepared to try new things to get to new customer groups – it may well be a springboard bringing customers into the fold of pure Tiffany.

The Tiffany/Supreme collaboration, celebrity partnerships, and “Not Your Mother’s Tiffany” tagline are most definitely not the proper steps for the original storied jewelry brand. However within the LVMH umbrella and under the tutelage and leadership of Alexandre Arnault, it is abundantly clear that a new Tiffany is emerging with a view to growth and expanding the customer base over maintenance of the status quo.

This bold strategy shift for the storied jewelry brand will reinvigorate the brand and ignite new growth. Some old money will object, but Tiffany’s updated strategy will deliver growth while projecting exclusivity wrapped in a unique brand proposition.

Walmart was not successful when trying to offer luxury products because loyal consumers did not see the fit and new consumers were unable to reconcile the new era with the old. J.C. Penney was not successful attracting new consumers when turning its back on programs and products that appealed to traditional consumers. Tiffany needs to consider how compatible the desired new consumers are with their traditional consumers. If they are not very compatible, Tiffany will have to consider their chances for survival if they lose current consumers. If there is a strong possibility of losing current consumers, then Tiffany should consider the possibility of launching the new lines under a new name. Nordstrom appealed to discount consumers by opening Nordstrom Rack not by including the discounted items in traditional Nordstrom stores. If the consumer groups are significantly different Tiffany plays a dangerous game trying to appeal to both of them with the same name and image.

This is not a new tack for Tiffany. When Elsa Peretti was brought on board, wasn’t it at least in part expected that her voluptuous pieces would bring the seventies, Halston-infatuated crowd to stores? Surely at the time, some of the jeweler’s stodgiest customers found the implied/obvious sensuality of the sterling a bit too-too. And so it is that the Supreme collection will be about just that — bringing “their” fans on board. Albeit temporarily. Tiffany will have to find a continual line of “arm candy” to give it any ongoing street cred. Because as sure as Supreme is (but isn’t, really) “of the moment,” that partner will have to be another “hot” one next year (or, even, next month). Truly the only way Tiffany, or others like them, can convince younger generations to go along with them, is to have that group brought in by their parents. As would a mother or father show a daughter or son the merits of an art museum. Which we all know can only convince a handful of… Read more »
0
|
0
-   Share

In this case, Tiffany’s succeeded with the Supreme collab on the power of the Supreme brand. Wonder how many of the buyers would convert to Tiffanys buyers in the long run? The key to Tiffany’s is to find its spot in the youth buyers market to sell in between the string of collaborations. Status quo of traditional Tiffany’s buyers is disappearing as their tastes change, you have to reinvent yourself before your customers go away. Lessons from Harley Davidson is definitely applicable here.

It is hard to shed the perception of being “your mother’s brand,” just ask Diet Coke. Tiffany is at a place in brand maturity where they can still divert this label; they are smart to go for it while they can.

As with all collaborations, Tiffany has to be vigilant about protecting it”s brand equity. Creating new/different product lines rather than using legacy jewelry for the collaboration helps. If older consumers are ruffled just a bit, then Tiffany is probably doing it right.

Tiffany has a very specific and loyal consumer base that will continue to shop with them despite any failed marketing initiatives or collaborations.

As the saying goes, “no publicity is bad publicity.” Tiffany, in my opinion, did not lose anything here. Instead, they captured the attention of a younger audience — an audience that will have the capacity and power to determine a brand’s future in the coming years.

Braintrust
"Long established brands like Tiffany must be prepared to try new things to get to new customer groups."

"Some old money will object, but Tiffany’s updated strategy will deliver growth while projecting exclusivity wrapped in a unique brand proposition."

"This choice feels like too much of a risk considering that in order to retain the new consumer base they may have won, they’ll have to keep up the association with streetwear."