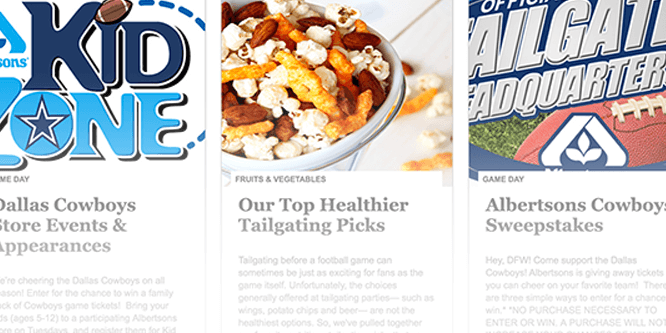 Tying online advertising to in-store behavior isn’t easy, but Albertsons is working on it.

The grocer is rolling out a solution for CPG brands that sell in its stores to give them feedback on how their digital ads are performing, according to a company press release. The solution, called Albertsons Performance Media, will allow CPG brands to create and target ads and calls to action across online and mobile channels based on in-store purchase data. It will also measure ad performance by linking online views of specific ads to verified in-store purchases.

The press release details a few use cases for the platform such as targeting:

Albertsons is rolling out this platform at a time when there’s been a growing trend of retailers getting involved in the tech game; even big box grocers. One of the most notable retailers that has taken such steps is Walmart, which has not only upped its e-commerce game through the acquisition of Jet.com, but has launched its own tech incubator Store No. 8.

Albertsons has been taking other steps to modernize and improve its level of esteem in the grocery world. Last September the grocer acquired Plated, an online meal kit subscription service. Albertsons added an omnichannel element to the service as well, stocking the meal kits on the store shelves.

Albertsons has also been looking to acquire its way to a much bigger footprint – and perhaps to a concept that would play better with the Millennial customer. The grocer, which significantly grew its footprint when it acquired Safeway in 2014, was one of the big names floated as seriously considering acquiring Whole Foods before Amazon did. Albertsons was also exploring the option of buying Sprouts Farmers Market according to a New York Post article last May.

The private equity-owned Albertsons had planned an IPO, but plans stalled in the wake of the announcement of Amazon’s acquisition of Whole Foods last year, according to Bloomberg.

Please practice The RetailWire Golden Rule when submitting your comments.
Braintrust
"This is a great first step and headed in the right direction. "

"I’m not sure about the chances for success, but I am sure the CPG brands will happily divert trade dollars to these experiments."

"This is a good move from Albertsons. Brands, especially CPG brands, demand accountability on their marketing dollars..."

10 Comments on "Can Albertsons help brands hone their digital ads?"

It’s wise of Albertsons to take a more strategic role in enabling CPG marketing programs. The days of “stack-it-high-and-watch-them-buy” are long over. CPGs will allocate marketing dollars based on where they can prove greatest lift, and Albertsons makes this much easier. This is merely one of many efforts that help set Albertsons apart from the other major grocery players and puts it in a better position to be successful.

This concept should have some benefits for Albertsons. However, the concern is that these days we are getting inundated with app notifications, too many emails and texts that many customers are just ignoring. I find myself turning off app notifications because there are just too many and too often. So in this case, I would suggest Albertsons coordinate their efforts with what the customer wants regarding frequency and what offers the customer finds appealing before it just becomes something they tune out.

I’m not sure about the chances for success, but I am sure the CPG brands will happily divert trade dollars to these experiments. This concept falls directly into the digital desires of brand managers who are unhappy with such things as coupon fraud.

Well, as the saying goes; it can’t hurt! This kind of collaboration is needed for the retailer/supplier relationship to succeed. It sounds like a win/win concept. If Albertsons is charging the CPG companies for placing ads and banners, etc. then CPG firms are going to have to determine the value of the proposition. There is a quid pro quo. As to the image question, is that as important as creating something in which both sides of a transaction can benefit?

It won’t hurt, but is it a big idea? We’ll have to see. To Art’s point above, shoppers keep on saying that don’t want app notifications in stores, so pinning your hopes on giving them extra messages is iffy. It will be a nice data source for research — you know who got the message and you know whether they bought or not.

This is a great first step and headed in the right direction. I too wonder how much longer consumers are going to let app notifications consume their phones but there are always innovative new technologies right behind. The bottom line is to know your customers, what they want and give it to them the way they want. That means staying on your toes. For my 2 cents.

This is a good initiative. However, Albertsons also needs to focus on the quality of its estate. Too many of its stores are down-at-heel, and some are downright depressing. Shaw’s is a prime example of a chain in the Albertsons family that needs a massive revamp. Safeway and the Albertsons banner also leave a lot to be desired.

So a thumbs up for this, but two thumbs down for the lack of progress elsewhere in store!

Hmmm. “Albertson’s has also been looking to acquire its way to a much bigger footprint — and perhaps to a concept that would play better with the Millennial customer.”?

This is not the strategy to help attract Millennials. Note today’s discussion about the acceleration of the online grocery trend. Supermarkets in general are not the places that Millennials spark to and nothing that revolves around generating in-store interest will change that.

That being said, it is a good idea if they can pull it off. The risk is that the data will show the CPG companies that it doesn’t work. But I guess that is good.

This is a good move from Albertsons. Brands, especially CPG brands, demand accountability on their marketing dollars (at least from their digital marketing dollars — print FSIs are a whole different kettle of fish that seem to defy accountability). Beyond validating the efficacy of digital dollars spent on Albertsons, this allows both brands and Albertsons to understand what works, what doesn’t and to optimize going forward.

I applaud the effort and strategically think it is a good idea for Albertsons and the CPGs. It will come down to execution as I don’t think they have the technology, media chops to compete with the likes of Google, Amazon, Facebook and the thousand of ad tech companies around. However, with the right team and right funding, they could possibly even make it a profit center.

I don’t think how they work on attributing advertising for their big CPG brand partners will have any effect on establishing them as “a tech-forward, millennial minded grocer.” But, I doubt that is even a goal.

Braintrust
"This is a great first step and headed in the right direction. "

"I’m not sure about the chances for success, but I am sure the CPG brands will happily divert trade dollars to these experiments."

"This is a good move from Albertsons. Brands, especially CPG brands, demand accountability on their marketing dollars..."