Would Albertsons and Whole Foods make a good match? 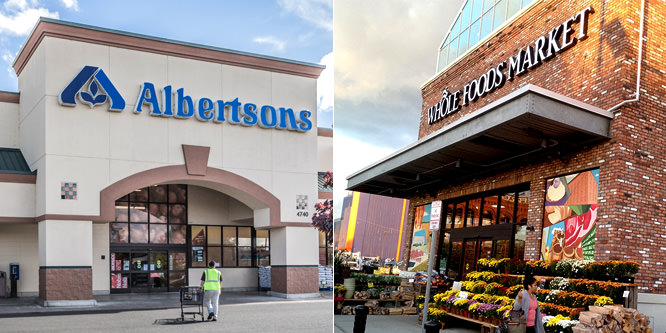 Amazon.com reportedly had internal discussions about a bid for Whole Foods Market before deciding to take a pass. Kroger has also been mentioned as suitable suitor for the organic and natural foods grocery chain. Now, comes a report that Albertsons Cos. is mulling a run at Whole Foods.

The Financial Times reports that Cerberus Capital Management, the private equity group that controls Albertsons, has begun preliminary discussions with bankers about making a bid for Whole Foods.

The report follows revelations that the Jana Partners hedge fund, which owns 8.8 percent of Whole Foods’ stock, has teamed up with other shareholders to seek four seats on the chain’s board, push for more aggressive action on its turnaround plan, and to explore other options including a possible sale of the company.

Albertsons, which operates conventional supermarket chains under its own banner and others, including Safeway, Vons, Jewel-Osco, Shaw’s and Star Market, was reported by Bloomberg last month to have engaged in preliminary discussions with Sprouts Farmers Market about a possible acquisition of that organic grocery chain. While those talks did not lead to a deal, the experience hasn’t appeared to have put Albertsons off looking for another.

Whole Foods has taken numerous steps to turn its business around. The chain has begun working with the data analytics firm, Dunnhumby, to better understand its shoppers. Whole Foods has also tightened up its pricing, launched a loyalty program, created a national advertising campaign, and debuted a new competitively-priced format under the 365 by Whole Foods Market banner.

DISCUSSION QUESTIONS: Would Albertsons’ approach to running its acquisitions work well for Whole Foods? What do you see as the biggest challenges and opportunities for the companies should a merger take place?

Please practice The RetailWire Golden Rule when submitting your comments.
Braintrust
"Whole Foods needs to re-invest in its value and quality story, not drop down into the world of commodities."

"...there is no real saving Whole Foods until they totally ditch the “shop here and feel good about overspending” attitude."

16 Comments on "Would Albertsons and Whole Foods make a good match?"

Whole Foods still reports numbers that are the envy of the industry. They would be a nice addition for any company. However, it would be all about the numbers at that point and we would see operations become sterilized. If you are a customer or employee, it will turn out badly for you. If you are a short-term investor, then you should do quite well.

What a terrible idea! Whole Foods needs to re-invest in its value and quality story, not drop down into the world of commodities. That might bring shorter-term profits, but long-term would prove disastrous.

While Whole Foods is the clear market leader in the arena of organic, holistic lifestyle and food choices, the perception out there of being the store with the “Whole Paycheck” label needs to be resolved. What Whole Foods has to focus on are personalized customer engagement, optimized pricing and promotions, as well enhancing their mobile shopping app to better engage with their consumers and streamline their assortments by market.

Part of Whole Foods’ positioning is that it is Whole Foods. A place where you go to feel better about your food purchases than a typical supermarket. Being owned by Albertsons will change its cachet with its current customers. It may be a win for Albertsons and its ownership but not for the Whole Foods organization and customers.

We all want our shopping experience to be adventurous, enjoyable and filled with suspenseful discovery. I recently had that experience when I had my first experience in Fresh Tyme — a newer “organic” grocery retail concept owned by Mejier. It was fantastic. All these mergers are turning the retail landscape into boxes of sameness. Undifferentiated and bland retail — exactly what drives shoppers to Amazon. Why venture out to shop and explore when you already know what to expect? Let Whole Foods and Albertsons explore and nurture their own brand identity rather than throwing it in the retailing Cuisinart and having it all blend into one bland (and failed) experiment.

This is one acquisition that Albertsons needs to keep its hands out of the customer-facing part of the business. Certainly Whole Foods could benefit from the synergies and savings in overhead, insurance, etc. that such an acquisition generates. However, Whole Foods does not look or act like the rest of the banners in its portfolio. Albertsons should use the resources generated from this acquisition to re-energize the Whole Foods brand, with management that understands this business as opposed to the regular, conventional supermarket business.

I can’t imagine this turning out well for Whole Foods shoppers.

Whole Foods is a mission-driven “Why” company. To see the originator of the Conscious Capitalism movement sell out to a company that is a laggard in customer and employee experience would be disillusioning and would risk destroying everything the brand is built on. I’m sure John Mackey and the Whole foods executive team would resist a proposed deal with every tool at their disposal.

Not good for Albertsons and there is no real saving Whole Foods until they totally ditch the “shop here and feel good about overspending” attitude. Their time is over. Kroger and others are killing their market — and doing it well. Shops like Sprouts are just as organic but not wallet eaters and normal people shop there.

There are many definitions for success. Albertsons is probably not looking to expand its image to encompass an expensive, albeit quality product grocery chain.

Whole Foods seems to have not yet defined their sense of self. If they’re depending on data analytics/dunnhumby to understand shoppers, they will continue to miss the understanding they truly need to maintain their constituency and expand to other shoppers. I can’t imagine that Albertsons will provide the answer for Whole Foods.

What exactly would this offer to anyone, other than, of course, the usual hefty fees to bankers, consultants and insiders who sell off early (often based on glowing reports from these same cliques)?

My earlier experience with an Albertsons takeover was that it was one of the worst things than can happen to a store — short of going out of business altogether — and while the people involved are different, and so perhaps the experience would be as well, that’s hardly an endorsement.

Whole Foods problems stem largely from the entry of competitors. It’s called, “how a market economy works.” I can’t see what a buyout would bring to this, other than the usual formulaic responses like cost cutting and brand “rationalization” that might improve things short term, but would certainly worsen them long-term.

We all seem to agree on this — Paula said it best. It does sound like Albertsons recognizes the importance of such an entity, but haven’t thought realistically through about how it could be incorporated, or maybe run separately under the Whole Foods name, just under the Albertsons ownership.

While Albertsons may benefit from adding a natural grocer like Whole Foods to its portfolio, Whole Foods would risk losing its image/status as an independent, innovative retailer. Whole Foods may be in a position to accept some financial help, but things aren’t nearly bad enough for them to consider such a “bailout” that would devalue their brand. Whole Foods still has room to develop the natural grocery market and redefine innovation in the space. If they should fail at that over the next decade, it might be time to consider such an acquisition.

Not much of a debate on this one. Looks like short-term gain for investors at the expense of long-time brand strategy and at the expense of shoppers. Whole Foods doesn’t need a big daddy to sweep in and help lower their costs and prices to drive sales. They need to return to what made them special and unique as the best organic food provider.

I haven’t found Albertsons to be very progressive in strategy and approach. I think Whole Foods needs an owner that is advanced in turning customer data into strategies AND forward thinking in approach.

Braintrust
"Whole Foods needs to re-invest in its value and quality story, not drop down into the world of commodities."

"...there is no real saving Whole Foods until they totally ditch the “shop here and feel good about overspending” attitude."