Can Disney marry streaming and shopping? 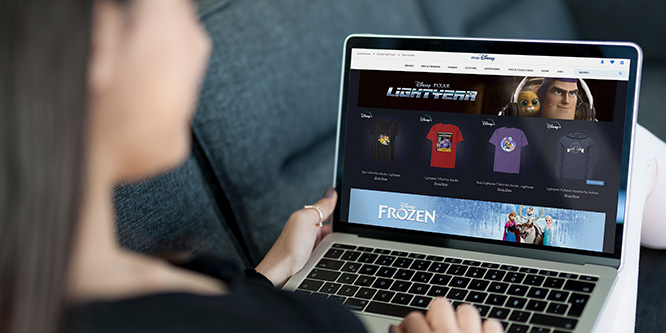 The Walt Disney Company last week launched a “limited test” in the U.S. that will allow Disney+ subscribers to shop exclusive merchandise from franchises like “Star Wars,” “Black Panther” and “Frozen” through the Disney+ app.

Disney+ subscribers can visit shopDisney.com/DisneyPlusSpecialAccess or go to the details pages for select movies, series and shorts on Disney+ and scan QR codes to get access to purchase merchandise about a week ahead of the general public.

The test is part of a broader effort to integrate Disney’s two main business lines — Disney Media and Entertainment Distribution (DMED) and Disney Parks, Experiences and Products (DPEP) — via Disney+ with a goal of developing Disney+ into a lifestyle brand app.

In September, Disney offered Disney+ subscribers discounts to Walt Disney World hotels in Florida and has confirmed it is exploring offering members special access to theme parks and resorts.

Amazon and Apple have bundled discounts and streaming videos and music offerings but haven’t directly linked product selling to their shows. Netflix also has products available at Walmart, Target and online, but does not link them to broadcasts.

Furthest along appears to be Comcast’s NBCUniversal (NBCU), which in 2019 began introducing shoppable content aligned with shows. Viewers scanned QR codes on their TV screens to be funneled into an e-commerce storefront. More recently, the service has been extended to a “Shop the Scenes” virtual shopping platform.

Writing for TechCrunch, Sarah Perez said the early product access should appeal to Disney fans since many are collectors. She added, “Plus, being marketed alongside shows and movies is one of the best spots to list these products for sale. The only question is whether or not streaming viewers will actually want to fiddle with their phone while they’re relaxing by watching TV.”

DISCUSSION QUESTIONS: How would you rate the viability of selling themed merchandise alongside certain Disney+ shows and films? Has the technology advanced enough to support couch-potato shopping from streaming services?

Please practice The RetailWire Golden Rule when submitting your comments.
Braintrust
"Eventually, it would be very cool of Disney to use this data to create 1:1 products for individual consumers."

"Yes, they can. But imagine if they brought their media assets to the retail shelves! What a missed opportunity for storytelling."

"This is the equivalent of toy commercials during kids’ programming and candy on the checkout aisle at kid’s eye level."

13 Comments on "Can Disney marry streaming and shopping?"

It makes a lot of sense. As more movie watching has moved to home streaming, kids will want the next big thing. Why make them wait when you can order it as you watch the movie simultaneously?

This is a perfect marrying of fandom merch and content. Consumers are already using their phones while streaming, so the scanning and smartphone buying won’t interfere with current viewing habits. The exclusivity piece of this is where the value comes in for fans to be loyal subscribers and early watchers. It just all fits seamlessly together, in my opinion. Eventually, it would be very cool of Disney to use this data to create 1:1 products for individual consumers.

They can do it. They will do it. And people will buy this stuff, so they will pick up sales that might ordinarily not have happened — how many people go out of their way to buy a Donald Duck monogrammed hat when they are not at a Disney park? My guess — not many. So sure, watch Buzz Lightyear and get the t-shirt to support your “Disney Lifestyle.”

I believe the bigger concern is whether or not there is a “consumer tipping point” where people just get fed up with companies like Disney commercializing everything, and keep their digital wallets in their pocket!

This is going to be a home run. Disney owns some of the most powerful brands on the planet. People have very real emotional attachments to Disney brands. The ability to shop as a direct extension of viewing Disney products is striking while the iron is hot.

Is this the next iteration of retail? I think so. Where else will my granddaughter be able to find that outfit from Emily in Paris?

Strategically, it is brilliant. It uses existing high-investment resources to generate additional revenue at a relatively small incremental cost.

This is a great idea. Children will drive business from their television, influencing their parents. Fueling the purchase is the fact that many viewers do not have the opportunity to personally shop for items at Disney parks. When at Disney World, watch the pressure children create for parents regarding items they just have to have.

Shoppable content is inevitable as media and merchandise converge. Disney+ and streaming rivals are investing where our eyeballs already are, building the infrastructure to fuel ads and e-commerce growth.

Right now, the tech isn’t seamless. Soon enough, leading players will shift our habits to maximize our consumption of content, goods and services. Fans will appreciate early access and exclusive deals, and immerse themselves in their favorite stories and characters.

Bundled discount packages make tremendous sense, especially when the brand has power in multiple formats. Offering a chance to buy while the consumer is already engaged in content is a marketer’s dream scenario.

This is the equivalent of toy commercials during kids’ programming and candy on the checkout aisle at kid’s eye level. You already have their undivided attention and can position a value-add. If you think about the 4 P’s of marketing, this is a strategic “placement” for Disney, and can’t cost a significant amount to implement — so why not?

We’re going to see dozens of new shopping channels in the coming years, eliminating friction and enabling consumers to purchase quickly and easily. Brands are going to partner with content creators, with exciting results.

The tech is there. If anyone can pull this off within brand, it’s Disney. They’ve managed to create demand for products for decades now without it feeling like a sales pitch or being intrusive. Looking forward to see this roll out en masse to serve their fans and customers.

Yes, they can. But imagine if they brought their media assets to the retail shelves! What a missed opportunity for storytelling. The closing of the Disney stores was a condemnation of their ability to marry digital storytelling with physical products. Can they do the reverse? Yes. Would they unlock more value if they activated stores with their media assets? Absolutely.

Meeting people in the moment is a great way to bring e-commerce to the fandoms and nostalgia they’re tuning into. It’s personalized to the movie/show they’re watching and provides the sense of instant gratification consumers are looking for when they shop. The key for Disney will be building on the marriage of streaming and e-commerce tech to also provide the checkout and delivery customers are looking for.

Braintrust
"Eventually, it would be very cool of Disney to use this data to create 1:1 products for individual consumers."

"Yes, they can. But imagine if they brought their media assets to the retail shelves! What a missed opportunity for storytelling."

"This is the equivalent of toy commercials during kids’ programming and candy on the checkout aisle at kid’s eye level."