Can Google become a legit alternative to Amazon for sellers (and buyers)? 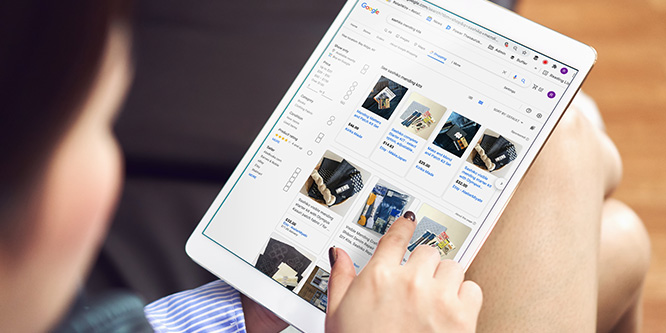 Google over the last year has been shifting to build an “Anti-Amazon of E-Commerce” for sellers, according to a New York Times profile. The obvious hurdle for Google, however, is Amazon.com’s stature as the go-to online search engine for shoppers.

Google fared better when it came to holiday purchases. Asked where they intend to research for holiday gifts, Amazon was cited by 65 percent; Google, 45 percent; retailer/brand website, 35 percent; and other marketplace, 25 percent.

The search engine and technology giant has taken a number of steps over the last year to support third-party sellers. These include:

One ongoing benefit seen in selling through Google is that customers are sent directly to a merchant’s website, enabling direct connections with customers.

Google’s moves are expected to significantly increase the amount of merchandise available across its selling platform to the benefit of buyers. Google Shopping had about 3,700 merchants at the end of 2019 versus three million active sellers on Amazon.com, according to Marketplace Pulse.

Smaller sellers have increasingly voiced complaints that Amazon is squeezing them for more fees. Many are also believed to be looking for alternatives to Amazon as the pandemic has increased its dominance, which now includes a formidable advertising platform.

Bill Ready, a former PayPal executive who is overseeing the overhaul of Google’s shopping platform, told the Times, “Nobody wants to live in a world where there is only one place to buy something, and retailers don’t want to be dependent on gatekeepers.”

DISCUSSION QUESTIONS: Is the bigger challenge for Google’s shopping platform attracting sellers or shoppers? What would an ideal Amazon alternative look like to sellers?

Please practice The RetailWire Golden Rule when submitting your comments.
Braintrust
"Seems like a lack of focus and huge ego-driven ambition to me, but hopefully it’s just a game effort to learn something and make Jeff mad. Guess we’ll see."

15 Comments on "Can Google become a legit alternative to Amazon for sellers (and buyers)?"

I think Google will have a challenge attracting both sellers and shoppers. As formidable as Google is, it’s just not the same as having a “buy now” button on Amazon, not to mention Prime and everything else that goes with the Amazon experience. I understand sellers looking for alternatives to Amazon, but Google’s got a long way to go in matching the access to buyers that Amazon has.

Ever read something and go, huh? Then think it through and still go, huh? It seems Google will try, and sometimes do, just about anything. Talk about World Domination obsessed. They have the best, easily most impressive search engine ever even dreamed of that brings in zillions in ad money — that gives them permission to mess with Amazon? Seems like a lack of focus and huge ego-driven ambition to me, but hopefully it’s just a game effort to learn something and make Jeff mad. Guess we’ll see.

Small and mid-sized businesses need players like Google to find ways to successfully “mess with Amazon.” It is difficult to build a sustainable business on Amazon as a seller: your products on Amazon are surrounded by your competitors (even on your product pages) you don’t receive customer data (which makes it challenging to build a loyal customer base), and Amazon fees reduce your margins. On the other hand, developing your brand name to increase sales on your own website is costly and takes time. As a result, having Google (or any other player) develop a good alternative to Amazon would greatly help small and mid-sized companies.

The question isn’t where do consumers start their product search, it’s where do they finish them. The experience on the Google marketplace pales significantly in comparison to the experience on Amazon.

The article mentions the following: “One ongoing benefit seen in selling through Google is that customers are sent directly to a merchant’s website, enabling direct connections with customers.” This might be a benefit for the sellers, but for customers? Not so much. To have to go to yet another site, activate another account, provide my payment details to yet another online merchant… I strongly believe that consumers want easy, and in the e-commerce world easy is one click. Until Google can offer one-click shopping across their platform, customers who start their product searches there will mostly visit Amazon to finish them.

“One-click” integration with Shopify would be a boon to sites like ours, from a customer-convenience angle.

From a merchant/manufacturer angle, logistics and shipping costs are the mountain in our way. With all the surcharges, base rate hikes, and delivery blackouts, we can’t make money on sub-$100 orders anymore! Amazon is beating the UPS/FedEx duopoly with their own vehicles and people, so can Google and Shopify work out some kind of unified deal with the USPS, DHL, and other regional services?

I don’t see an issue with Google attracting sellers. Sign up is easy. Hopefully those sellers stay with Amazon as well, or risk a significant drop in sales.

My real problem is on the buyer side. for example, I just bought some athletic socks. I went to Amazon and put in “athletic socks.” They game me page after page of choices. Many, many brands, designs, and prices. I had the whole world of athletic socks to choose from.

I thought I would compare so this morning I went to Google and put in “athletic socks.” What I got was a ream of retailers. To shop, I would have to open each retailer’s website and go back and forth to compare. Why would I do that when Amazon makes it so easy to shop?

Google’s challenge will be attracting frequent shoppers. There’s no issue signing up sellers as the cost of entry is still very low. Allowing Shopify and PayPal makes that even more attractive for sellers. But Google may develop an edge in more specialized purchases. I had this experience just yesterday. I need a specific tool and had been teased by a specialty store sale flyer but was turned off by shipping delays, costs and tax. My helpful Amazon assistant popped up with a suggestion and I smiled. We are addicted to Prime and the 5 percent cashback Amazon store card. But alas, the model I wanted was not on Amazon. A Google search of sellers for that brand and model turned up six more specialty tool sites and my order was placed at the same price with free shipping, no tax and immediate availability. So yes, Google will have a place — when Amazon doesn’t meet my needs. How often is that? Rarely.

Google is not well-positioned to be a replacement for Amazon — it isn’t really trying and shouldn’t try. Google Smart Shopping is great and works well as a traffic-driver.

I would love to see them continuing to invest in helping local businesses through tighter integration to Maps, similar to their recent deal with Albertsons, etc.

Google is a great search engine. It is also a good place to shop if you know exactly what it is you want. Admittedly I’m not much of a shopper but I never realized there was a Google Shopping site. I looked at it today and found it was a lot of work to shop because I had to go brand by brand for an item I was researching. As Gene pointed out this is not the case on Amazon. Google Shopping will have to invest heavily in features and functionally to out-Amazon Amazon.

From the user/shopper experience, conflating massive product choice options as a great shopping experience is linear thinking. Conflating all shopping experiences as the same, whether for socks, tomatoes, or a dress is just plain ignorance. Amazon is a game to play for third-party sellers in which Amazon holds all the cards, while a Google search for a product now deploys a cross-screen row of image boxes, each linked to a retailer’s website. For either Amazon or Google, the discussion is really about making money, not the user shopping experience.

This is why online shopping conversion sits at 3% for two decades and returns range from 35% – 50%. Watch out folks, once voice shopping becomes “intelligent” why would a consumer spend hours to sort through thousands of products when a consumer can simply say to their voice assistant, “I need a great pair of jeans for work!” “Ok”, says the VA, “your new, fabulous jeans are on their way to you now. Have a fun day.”

If anyone can take on Amazon’s platform, it is Google. That said, is this the strategic move that Google should be making? Is it in their lane? Some would say it is, and it is positioned perfectly to get into the eCommerce industry.

As someone — I think it was Peggy Lee — once musically asked: “Is that all there is?” So Google attracts a potential customer and then … is that all there is (to it)? Amazon has a whole infrastructure (from search thru purchase to delivery) that supports its sales effort; what, precisely does Google have to match this?

Frankly, Google’s challenge is with both shoppers and sellers. For sellers, Google has focused on reducing barriers of entry to their platform by eliminating fees and making some forms of access easier (i.e. Shopify and PayPal integration). But the problem here is still one of discovery. Retailers need to know their products will be found if a shopper comes to Google to search. Once a shopper comes to Google for product search, retailers need something more than the usual Google ad play to compete for product placement. Google needs to offer more tools here to be more appealing than Amazon’s marketplace. Another factor is simply how retailers are to perceive the Google offering. Amazon is clearly a marketplace — but what is Google offering other than the search bar? For shoppers, Google is really competing with convenience. Amazon offers a buy now button. Easy to find customer reviews. 3 million sellers versus 3,700. And then there is the convenience of fulfillment. How does Google compete with Fulfilled By Amazon and Amazon Prime in the eyes… Read more »
0
|
0
-   Share

Google got the search part down, but what Amazon offers is the end to fulfillment and distribution that they can offer to sellers and shoppers. Google needs to decide whether it can be more than a search engine for retail discovery compared to Amazon that provides the end to end experience for consumer

Braintrust
"Seems like a lack of focus and huge ego-driven ambition to me, but hopefully it’s just a game effort to learn something and make Jeff mad. Guess we’ll see."