Cannabis-infused drink and food makers are high on grocery opportunities 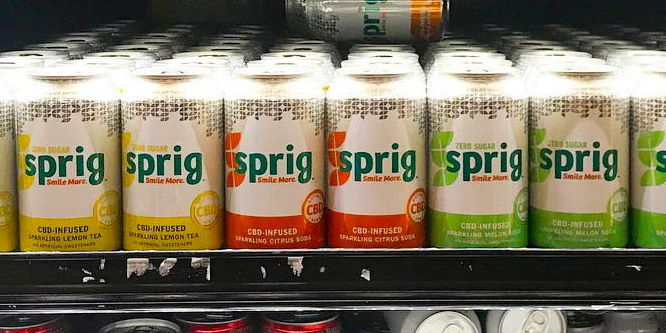 Through a special arrangement, presented here for discussion is a summary of a current article from the bi-monthly e-zine, CPGmatters.

For a peek at how the nascent market for cannabis-infused beverages is going to evolve, consider what’s happened to the cans of CBD-laced Sprig sparkling soda in the refrigerator cases at Bristol Farms supermarkets in southern California.

They’re still for sale. But Bristol Farms hasn’t placed any new orders because the California Department of Public Health has declared that it’s not going to allow beverages including hemp-derived CBD until the FDA takes an official position on it.

So it goes in the wild west category of CPG beverages: drinks infused with CBD, which stands for cannabidiol and can be derived from hemp or marijuana, and drinks infused with THC, the psychoactive component in marijuana. Legal liberalization, changing cultural mores and consumer demand are rapidly turning the fringe market into a mainstream pursuit — but the road to the general market could be rocky for all the parties involved.

Big retailers so far are largely staying away from what is already available. Said Ken Harris, Cadent’s managing director, “Since this is an evolution, the process will be slow at first and regulated by state. Some retailers will exhibit a lower threshold than others to stock the items based on consumer receptivity.”

Canadian companies and consumers have been leading on this new frontier largely because Canada is one of only two countries, along with Uruguay, that has legalized recreational marijuana. In the U.S., staunch opposition remains to easing of restrictions on any sort of CBD or THC consumption, both on practical and moral grounds.

But even in the U.S., Mr. Harris believes, “Over time, stigmas will be relaxed and the benefits of cannabis will be better understood by mainstream consumers and by retailers who carry the products.”

DISCUSSION QUESTIONS: What’s the likelihood that cannabis-infused food and beverages will be widely stocked in grocery stores within the next five years? Beyond the regulatory statutes, what other factors might influence a retailer’s decision to stock the products?

Please practice The RetailWire Golden Rule when submitting your comments.
Braintrust
"I think the likelihood is there. Grocers are merrily selling health drink Kombucha, which contains a bit of alcohol."

Regardless of which side of this discussion you’re on, consumer demand drives product availability. At this point, there is a tsunami of dispensaries popping up across the country, and as soon as local governments approve these new CPG products, they will flow into stores by the truckload.

We are currently undertaking a big study on cannabis and cannabis products. Demand is growing rapidly and consumer attitudes are changing swiftly. In states where legalization for medicinal and/or recreational cannabis has yet to happen, there is massive latent demand.

Here in Arizona (where cannabis is legal for medicinal but not recreational purposes) we have an enormous number of dispensaries, including some which now have full restaurants will all sorts of cannabis infused foods.

It’s a fascinating market that is becoming mainstream for both retailers and CPG firms.

I think the likelihood is there. Grocers are merrily selling health drink Kombucha, which contains a bit of alcohol. And I’m pretty sure you can get CBD out of hemp, which is less illegal.

Here’s the thing, though. Do we know if any of this stuff actually works for all the things people claim it does? No one knows, because we still call it a Schedule 1 drug (thanks Dick Nixon!) and so no actual research happens.

I know that marijuana is essentially harmless, certainly less harmful than alcohol but I’d love to see some data on the things it is and isn’t good for. That’s not going to happen under the current administration. Next one, maybe.

Cannabis-infused anything is likely to be stocked in grocery stores if it is legal in that state, if the state doesn’t impose dumb restrictions as to where these items can be sold, and if the retailer doesn’t have corporate or religious reasons for not selling it. whether it takes five, or four or six years will vary by state.

Under the current laws, this is all really complicated. After all, any bank accepting deposits that come from the sale of cannabis-based products can be indicted for money-laundering.

I recently attended Expo East, the Natural Products trade show in Baltimore. Even though this show is about a third the size of the one in Anaheim, the number of cannabis or CBD infused product categories was staggering. Many of these products are focused on relieving pain for specific problems where traditional methods (NSAIDS, Ibuprofen, etc.)have either not worked or where prescription pain medication has lead to huge addiction issues throughout the U.S.

CPG manufacturers will most likely be the first movers to get in front of this opportunity while retailers will stay on the sidelines and wait to see what happens. The CBD wave is coming and those that take the risks will reap the rewards, if not in the U.S. for a few years, in other markets.

We’ve already been contacted by CBD companies that are starting to plan their category management and shopper insight analytics and shelf management go-to-market strategy. Starting to look pretty mainstream to me.

The market as always will dictate which direction the smaller and larger CPG brands need to go. These are indeed fascinating times, where literally the entire beverage, coffee, and tea categories are infused with something additional, and it results in high margins, otherwise known as retail magic.

Cannabis foods are no exception and it does raise some interesting questions. There is a public perception of cannabis and hemp-based foods that isn’t necessarily the best, however, through education and learning this may quickly be diffused. Once the regulatory constraints are lifted across the states, then we should expect every major player to be a player in the cannabis-infused game.

The FDA has already approved a cannabis-based drug for the treatment of childhood epilepsy, and rescheduled the drug down from Class 1 to Class 5. Pharma, food and beverage companies have unmarked buildings that are testing all sorts of hemp/cannabis products in an effort too meet rising demand. The “cannabis demand train” has left the station and smart retailers will be buying tickets to ride.

I can’t find that info anywhere. Wikipedia still reports it as a Schedule 1 drug.

For the CPG companies to market cannabis-infused and beverages the regulations have to change first regardless of consumer demand. Investigation can be done by Coke, Pepsi, and other CPG companies, etc. with out running afoul of the law, but manufacturing and distributing them is another matter. I don’t see the FDA approval occurring in the next five years however if the approval does come many CPG companies will be ready with a wide variety of products.

Steve — as you can see in my remarks below the Sprig issue is a separate case since it involves THC-infusion as opposed to say hemp-sourced CBDs. It is the psychoactive ingredients that seem to be an issue here — although if the FDA follows the lead of the current (albeit probably only until after the midterms) Attorney General there may be a significant issue. Sessions hates “marijuana” in any form and is on record as opposing legalization. Obviously legalization could lead to large scale growing operations, reduced supply chain costs, open distribution and — by extension — accelerated interest on the part of CPGs.

Sorry to be a nudge, but if you look at the Sprig website you will see that they are marketing their product as THC-infused. There is a lot of difference in selling a product containing CBD and selling anything with THC in it, the latter being psychoactive and the former being non-psychoactive. In the U.S. the issue is really still at the federal level. In Detroit we have had major raids, (accompanied by a significant amount of property damage) of grow-ops that conform to Michigan law but are — according to the DEA — in violation of federal law anyway. I’d say that until that little wrinkle straightens up it’s going to be a problematic market. Now, that said, federal policy could change tomorrow. As to other issues, some retailers — and more than a few customers — are likely to never move past the, “drugs are bad” position, so community standards will dictate who does and doesn’t carry these items when and if all the legal restraints are removed.

Cannabis infusions will certainly drive grocery traffic within the next three to five years, especially in cannabis-friendly states like California and Colorado. Attitudes are changing, as consumers see the diverse therapeutic value of cannabidiol (CBD) for calmness (vs. the highs of compound THC).

While smoking remains taboo, cannabis drinks are comparatively discreet, clean and socially acceptable, which will drive consumption. No doubt U.S. retailers will keep an eye on Wednesday’s cannabis legalization in Canada (although edibles won’t be legal until Fall 2019).

Beyond regulations, vocal consumer demand and investor enthusiasm may change retailers’ minds about this stigmatized sector as they see how this new drink category is poised to be popular and lucrative.

If shoppers demand these products, and if mainstream manufacturers produce them, most supermarkets will sell them. But where should they be stocked? In a separate section like alcohol, or blended in with traditional products? If the latter, it will be a category management challenge.

John — remember CBDs have no psychoactive properties. They literally can’t get you high, or anywhere close to it. So, there shouldn’t be any need for segregated shelving.

And what, exactly, are all these “benefits”? Perhaps I’m being cynical, but I’m doobieous … er, dubious that someone selling them is being completely impartial.
But back to the question: given that there’s been no change on the Federal level, and that would be necessary for any mass marketing, at this stage I would say “small likelihood”.

With the various laws and still high level of education needed on the consumer side to distinguish CBD from THC-focused cannabis products, it will be slow going for large “mainstream” retailers to start to sell these products. The consumer demand is growing, but even for a big proponent of the cannabis space, the claims that CBD can cure and help with just about everything are a bit too broad. I do know that in the pet space they can barely keep CBD products for dog anxiety, certain skin conditions and issues with aging on the shelves.

WHEN this gets going (not “if”), this niche will be robust. Interest is strong, there’s a huge amount of investment underway, and customers are bound to be curious. We all will try it, right?

The (Acapulco) Gold Rush is on with respect to cannabis-infused products, there’s no doubt. The battle lines will be drawn between folks who want to market CBD and THC from the wellness perspective and those who want to appeal directly to consumer demand. Big pharma is positioning. Soft drink firms too. Infused candy is already a cottage industry. My money is on the breweries, who I can imagine replacing hops with hemp for a product that would sell nicely through existing channels.

Change on this issue will be slow. Legalization conflict between state and federal laws is already an issue that will require true federal approval with state approvals following this. This is required of all other drugs and alcohol, and cannabis foods will require the same before national chains embrace any brand. Buyer beware is the code by which all stores have to follow when they decide to stock any non-federally approved drugs like cannabis.

Braintrust
"I think the likelihood is there. Grocers are merrily selling health drink Kombucha, which contains a bit of alcohol."