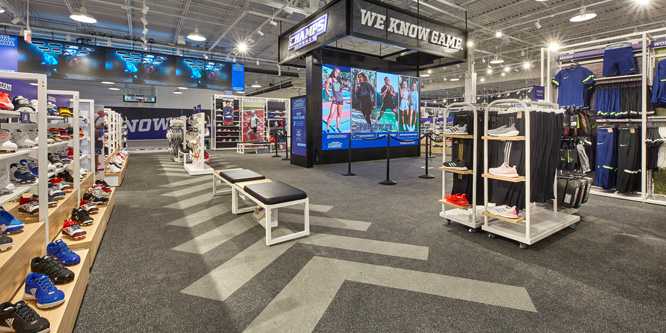 Homefield, which is opening this month in Pembroke Pines, FL, will carry sneakers and equipment aimed at a number of different individual athletic pursuits and team sports, including running, training, yoga, basketball, football and baseball, according to a press release.

The store has a full basketball court and multi-sport court, a VR system, and is intended as a destination for running enthusiasts as well, stocking 65 performance shoes and a try-on treadmill in-store. The store is 35,000 square feet — the largest of any concept owned by Foot Locker — and will host regular event programming and workshops, as well as sporting events.

During the grand opening weekend, customers will be able to take part in numerous workout classes, customize footwear in conjunction with a local artist and visit a gaming lounge.

At the J.P. Morgan Retail Roundup conference in early April, Foot Locker said that it plans to continue expanding its off-mall footprint by expanding its number of experiential Power Stores to 300 within the next three years, according to SGB Media.

In summer of 2020, the chain had only opened a handful of Power Stores in the U.S. and globally.

While Foot Locker appears to be having success with its move off-mall and into standalone stores, the retailer experienced a big setback — or at least its stock did — with Nike’s announcement that it would be drastically reducing the number of SKUs it made available to Foot Locker.

Nike has played a particularly big role in Foot Locker’s appeal to “sneakerheads” who collect the shoes. So Nike’s reduction of “high heat” sneakers with a high collector appeal is where the chain anticipates the biggest blow.

Nike has cut or reduced a number of its major wholesale relationships in the past few years as it has begun relying more heavily on direct-to-consumer sales.

DISCUSSION QUESTIONS: Will HomeField be a winner for Champs Sports and Foot Locker?  Will the concept help the company pivot away from reliance on Nike and expand its appeal in the broader sporting goods interests?

Please practice The RetailWire Golden Rule when submitting your comments.
Braintrust
"Experiential retail is a growing trend. It will be interesting to see if this novelty wears off or if Champs Sports will be able to hold consumer attention."

"This is a good move for Foot Locker – increasing relevancy in the performance market needs to be customer-centric and Homefield could do just that."

"Foot Locker is adapting to consumers’ thirst for experiential shopping."

Foot Locker is adapting to consumers’ thirst for experiential shopping. When I was an avid runner, I would have loved the opportunity to try shoes on a track or treadmill before I purchased them. The Homefield stores, with a basketball court, multi-sport court, VR system, and treadmill, will attract sports enthusiasts as it will be a destination for entertaining experiences.

This feels like a “me too” to some of Dick’s Sporting Goods’ newest concepts mixed with a panicked reaction to the Nike move. It’s an interesting test, but Champs needs to be laser focused on understanding what the consumer draw will be to Homefield (if there is one).

I’m not sure I’m seeing enough in the experience to consistently draw consumers over time. Many outdoor retailers offer similar draws to brick and mortar, and they don’t bring the traffic required to offset the costs of such a large real estate footprint. Experiential definitely is an important dimension of the future of retail, but I’d love to see more out-of-the-box concepts than this.

Experiential retail is a growing trend. It will be interesting to see if this novelty wears off or if Champs Sports will be able to hold consumer attention.

This is a good move for Foot Locker – increasing relevancy in the performance market needs to be customer-centric and Homefield could do just that.

What will be interesting is if Homefield and Foot Locker capture customer insights to drive product decisions and how fast they can react to shifts in shopping behavior. Foot Locker group has some big shoes to fill with the downsized Nike assortment and merchandising strategy should be top of mind for the retailer. The venture into private label is an option but great brands are what will drive interest, relevancy and footfall to the Homefield stores, translating into sales.

If Champs can keep the Homefield store filled with varied and new experiences and support it with relevant digital touches, it will succeed. This is a space filled with tremendous competition so senior management needs to be laser focused on operational execution or risk losing consumer interest.

I believe they are innovative in making their stores a destination rather than just a place to sell things. This is retailing of the future. If someone just wants to buy, they can quite successfully do it online. If they want an experience, they go to those retailers that give the shopper a compelling reason to walk through the doors.

I can tell you this was a huge success. Knew a lot of folks that went, and there was huge buzz in the air. Foot Locker is definitely out in front in the experiential retail space. I expect more to come.

Braintrust
"Experiential retail is a growing trend. It will be interesting to see if this novelty wears off or if Champs Sports will be able to hold consumer attention."

"This is a good move for Foot Locker – increasing relevancy in the performance market needs to be customer-centric and Homefield could do just that."

"Foot Locker is adapting to consumers’ thirst for experiential shopping."