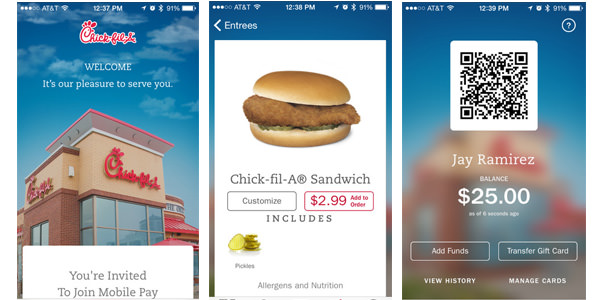 Customer loyalty is one of the most often misused words in foodservice and retail circles. But that’s not the case at Chick-fil-A where devotees have been known to camp out days in advance to be among the first in line when a new location opens its doors. Now, come reports the chicken chain has been running a “hush-hush” invitation-only rewards program known as the A-List, a way to demonstrate how much the company values its best customers.

Chick-fil-A first started the program in 2013, according to CNBC. Currently offered in about half the chain’s restaurants, the A-List was “meant to honor” the chain’s “best and most loyal customers.” In the end, according to the Chick-fil-A site, the goal is for the operators of local restaurants to know their customers on “an even deeper level” to provide higher levels of service. While any customer can join the program, according to reports, membership is at the discretion of the local operators.

The Chick-fil-A site lists the benefits of becoming a member of its A-List program, including free food awards, insider content through the company’s monthly publication, “Just Because Offers” handed out on an ad hoc basis, and exclusive experiences.

In the end it all comes down to service, said Carrie Kurlander, vice president of public relations at the chain.

“Our founder, Truett Cathy, founded Chick-fil-A with a focus on great hospitality, learning from others who are at the top of their game in the hospitality industry,” Ms. Kurlander told CNBC. “Our use of, ‘It’s my pleasure,’ was inspired by Cathy’s appreciation of the Ritz-Carlton’s service model.”

DISCUSSION QUESTIONS:
What is your reaction to details about Chick-fil-A’s invitation-only rewards program? Does the Chick-fil-A approach present any lessons — or perhaps warnings — for other companies?

Please practice The RetailWire Golden Rule when submitting your comments.
Braintrust
"It’s cool. Nothing is truly "hush-hush" and that’s part of the strength of it."

"Were we supposed to have a problem with this? If so, I don’t."

Exclusivity is a key ingredient of good loyalty programs. Loyalty should not be only (and maybe not at all) about discounting product to all loyal members. That local operators decide whom to invite to the A-List is questionable. There might be a standard across the chain, instead.

In all, Chick-fil-A has the right idea about loyalty programs and other retailers should take note.

All smart businesses do this anyway. When I worked for my dad in an independent supermarket we always went out of our way to take care of really good customers. Such as accepting their expired coupons, not questioning returns, giving out free ticket to Six Flags or helping them get their large orders home. Bigger retailers can track good customers much easier these days. I’m confident that the owners of Chik-fil-A’s franchises will come up with some unique ways to make special customers feel extra special.

The invitation-only approach is compelling. It adds a dimension of personal awareness and exclusivity that many people seek. The question is who, what and how determines who gets invited to the club? Without some metric (sales) that is available to all Chick-fil-A customers there seems to be a discretionary aspect of this program that could cause concern. Given all of the controversial issues surrounding race, gender identification and discrimination along with Chick-fil-A’s corporate opening religious guidance, this discretionary, invitation-only policy could be problematic. Perhaps that’s why its been so “hush-hush.”

It’s cool. Nothing is truly “hush-hush” and that’s part of the strength of it. Surely many people in the program have bragged or leaked details and that creates desire among others to want to get in on the action, which probably takes being a more devoted Chick-fil-A customer. For an active brand, it’s a self-propagating cycle that can drive increased revenue.

Making the customer feel welcomed, important and satisfied with their meal are an ingredient for success in building loyalty. Chick-fil-A accomplishes this through the vision that was set up by Truett Cathy and is carried forward today. I’ve stopped in Chick-fil-As in large towns, smaller communities, airports, north, south, east and west. The franchisee owners consistently put together great crew member teams who work to keep their restaurant clean, active, friendly and providing hot and enjoyable fast food. You can sense that those management teams and crew members are intent upon seeing their restaurant through the eye of the customer. Prosper Monthly Consumer Surveys asked over 7,000 respondents to provide their view of “On a scale of Zero to 10, How likely would you be to recommend this restaurant to a friend or family member?” In other words, the development of a Net Promoter Score. Chick-fil-A consistently achieves a high NPS each quarter. The February level was an impressive 58.84 percent. That level of approval puts the firm at the level of Wegmans, Apple products… Read more »
0
|
0
-   Share

In a world of cookie-cutter loyalty programs that literally distill every customer into a sequence of transactions, this is brilliant.

The company can do what it wants. However, I would expect this revelation by CNBC will create problems with consumers who will ask “why not me?

Were we supposed to have a problem with this? If so, I don’t. Loyalty is important; especially when it is a two way street. I am not anywhere near an A list with Chick-fil-A. But I am one who enjoys their product and friendliness when I do go there. So my take is keep up the good work Chick-fil-A. More companies should follow your lead.

Invitation only is fine if you are invited, but it is a potential source of bruised feelings for those not invited. “Hey, I eat there a lot too! Why was I not invited?!” If there is transparency, OK but otherwise, it can feel unfair if you aren’t part of the privileged class.

This is just another rewards program under the guise of “invitation only.” There are some great things which it tries to do, like continually reward their “best” customers, but it still ignores the most valuable part of their audience…the people who do not go to Chick-fil-A, and the reasons why. For any retailer, knowing why you are not appealing to specific audiences is one of the keys to developing success.

It would be interesting to know the demographics of such a loyalty program. I find myself wondering how many might be gay, lesbian, or nonwhite since it is at the sole discretion of the brand — a brand that has been in the news for taking some fairly exclusionary positions.

Consistent, rational loyalty programs, where the customer knows what to do to achieve “status” work better. I’ve never been a Chick-fil-A fan. The staff is usually friendly, the restaurants are clean, and the service is good. But, the food is unexceptional, a little pricey for fast food, and management has some curious attitudes.

One just has to look at the lines at any Chick-fil-A at any hour. Always long. There are plenty of reasons for that. Loyalty gained through execution, culture and trust. Great tasting fast food in a clean environment. Employees that care; this carries over to the customer.

Braintrust
"It’s cool. Nothing is truly "hush-hush" and that’s part of the strength of it."

"Were we supposed to have a problem with this? If so, I don’t."