Corona owner is getting into the legal pot business 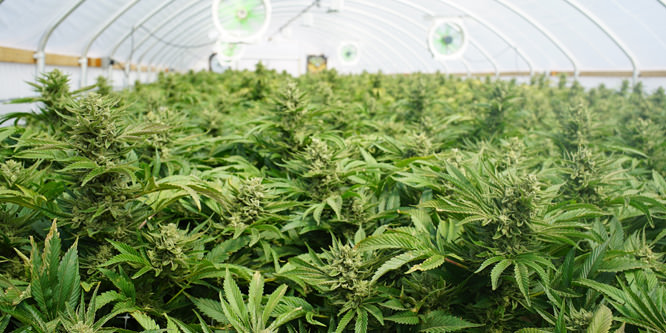 Constellation Brands, a maker of beer, wine and spirits, has signed an agreement to acquire a 9.9 percent stake in Canopy Growth Corporation, the largest publicly traded marijuana company in the world.

Canopy, which was founded in Canada in 2014 and has a market cap of nearly $2 billion, is currently traded on the Toronto Stock Exchange under the “WEED” ticker symbol.

Constellation is the number three beer company in the U.S. with brands including Corona, and is also the world’s largest seller of premium wines and a manufacturer of premium tequila, vodka and whiskey brands. Constellation plans to work with Canopy to create, market and sell non-alcoholic beverages such as coffees and sodas that contain cannabis.

Rob Sands, president and CEO of Constellation Brands, said the company made the move in anticipation of marijuana becoming legal across the U.S.

Canada may become the first market for Constellation to introduce its pot-infused beverages with cannabis products expected to be legalized by 2019. The company has said it will not enter the U.S. market until marijuana achieves federal legal status. Cannabis, which is currently legal for recreational purposes in eight states and Washington, D.C., is illegal on a federal basis.

A recent Gallup survey found that support for marijuana continues to grow. Sixty-four percent of Americans are now in favor of legalizing the drug. For the first time since Gallup began polling Americans on the topic in 1969, a majority of Republicans (51 percent) support making marijuana legal. Seventy-two percent of Democrats and 67 percent of independents also favor legal cannabis.

While Constellation is the first, it is unlikely to be the last alcoholic beverage company to get into the legal pot business. The Journal reports that Heineken USA CEO Ronald den Elzen told attendees of a beer wholesalers conference, “Wine and spirits are not sitting still, and marijuana is being legalized in many states. We have to act now, and we have to do it together.”

Beacon Securities analyst Vahan Ajamian, according to Bloomberg, also thinks pharmaceutical and tobacco companies may have plans to enter the legal marijuana business, as well.

DISCUSSION QUESTIONS: How likely is marijuana to be made legal on a federal level within the next five years? Do you expect more consumer brand companies to follow Constellation’s lead and acquire stakes in existing legal cannabis businesses or start their own? Do you see any retailers doing the same?

Please practice The RetailWire Golden Rule when submitting your comments.
Braintrust
"If other consumer brands are not already investigating and/or investing in this space, it is going to happen soon and in a very big way."

"This is a great investment, but certainly comes with image risks. Even if they just Market CBD oil with no THC, consumers will derive benefits."

"More than half of the states will have legalized recreational use of pot in five years, but I doubt it will be the law of the land until around 2027."

It is highly probable that this category will emerge on the national stage. Successful companies looking to get into the cannabis space must ensure a secure supply chain, prepare to embrace sure-to-be-established product labeling guidelines and establish an educational initiative that informs consumers.

If other consumer brands are not already investigating and/or investing in this space, it is going to happen soon and in a very big way.

Under the current administration, it is highly unlikely marijuana will be decriminalized. However, in some ways it doesn’t matter. Despite what the Supreme Court said in Gonzales v. Raich (2005), the federal government has no authority to regulate marijuana within state boundaries. As such, more and more states will nullify and ignore federal law — as they are entitled to do under the Tenth Amendment.

Wow, Neil. I didn’t know this. Thanks for the education.

Great point, Neil. I’ve heard of this and will now do more research into it, thanks to your calling it out.

I doubt that marijuana will be legal while Republicans control one or more branches of the government. Should that change in the 2020 elections, legality is a real possibility, but not a hot-button issue. Look for more alcohol and tobacco companies to buy into the nascent marijuana business. These companies are familiar with navigating the myriad of federal, state and local laws that will govern marijuana, and have the distribution systems in place to bring marijuana to the public.

Yes, it will be made legal. But as per the American way, it will be a matter of which lobby wins. There are a number of contradictions if not hypocrisy. Why is tobacco legal everywhere? Why is alcohol legal? How about opioids? Each one is federally legal because of influence on government decision-makers. Tobacco was historically pictured as a sophisticated, high society habit and even recommended by doctors. Alcohol was historically (and still) pictured as a way to joy, fun, friends, love. Opioids, supposedly, are under the control of doctors who, of course, can do no wrong. Drugs are beautifully pictured in magazines and on TV as solving all one’s ills. Cartoon illustrations show how they cure our body’s problems and you can’t argue with the evidence provided by animation. We’re even told to tell our doctors about them in case they need our diagnostic help. So cannabis? That comes from the “everything-goes” hippy culture aka potheads. Smoke filled rooms. Cheech and Chong movies. What medical cannabis producers need to broadcast is that “It’s not… Read more »
3
|
-1
-   Share

Regardless of the current administration, more and more cities and states are either legalizing marijuana or decriminalizing. This means money is flowing into the industry and we should expect to see more companies in the consumer industry flocking here given high growth potential (as it is no surprise that growth in many CPG companies has stagnated or is in the low single digits).

This is a great investment, but certainly comes with image risks. Even if they just Market CBD oil with no THC, consumers will derive benefits.

From talking to people around the industry it sounds like nothing is going to change until we get the next generation of politicians into power. Legalizing marijuana at the national level is pretty much turning the Federal drug policy on its head. The amount of work needed to successfully revamp the system to include marijuana as a legal drug almost seems impossible but if the right people are elected and if they have the support of their constituents then maybe in the next five to 10 years it could happen.

The way shoppers react to a brand’s support of controversial issues today will limit which manufacturers can get involved in this industry and if they do they better have a great PR department that’s ready to get to work.

I’ve been visiting Colorado for business at least five times a year since before cannabis was legalized there and can report that the pot industry there is developing in the same trajectory as the craft beer and whiskey businesses. Smaller producers and a limited number of retail outlets at first, but then pretty rapid growth of both. Now that at least some of the dispensaries are accepting credit cards, I expect there to be some consolidation on both the supply and retail side. Further, I can see some sort of channelization of retailers — co-ops, chains, independents — going forward.

As to the questions at hand, more than half of the states will have legalized recreational use of pot in five years, but I doubt it will be the law of the land until around 2027. And yes, mainstream CPG companies will move aggressively into the production, distribution and marketing of cannabis, led by the tobacco and, as evidenced by this story, the alcohol industries.

I don’t see this investment as a great idea, at least in the short term. The current US Justice Department could decide to make marijuana a big issue at any moment. I’d wait for a new, younger, more liberal administration if it were me.

As long as Jeff Sessions is AG and we have a Republican congress, it is unlikely that marijuana will become legal on a Federal level. Too many of the “base” still believe it’s a gateway drug.

What is seriously needed is some kind of quality control around the pesticides that are used on the plants, and dosage consistency in edibles. I’m not sure that “big business” is going to solve the former, though it will likely work on the latter.

Personally, this is one thing I prefer to see generally remain artisanal.

Cannabis is the new gold. You can’t imagine how many startups we have in Israel that’s are dedicated to Cannabis (mostly medical for now, but that’s just the beginning). Interesting move.

Soon as they figger out a way to tax it, the folks in Washington will probably legalize it. While the momentum is building, I suspect forces in the Federal government will likely insist on years of health studies before changing the law. Anything inhaled is automatically suspect, for good reason. This will favor big pharma and consumer goods companies, of course, because they have the capital needed to fund the research. Artisanal producers will be left behind in the smoke. Fascinating that a large brewing company like Constellation brands would make this kind of speculative investment, just from a product development perspective. Did you know that hops – Humulusthe plant most commonly used to add the bitter flavor to beer – and Cannabis are actually closely related plants in the family Cannabaceae? Imagine a bottle of beer “flavored” with weed. How popular would that product be? So as I see it, the battle lines being drawn here are not only between political views of recreational drug use. They are also between folks who have an… Read more »
1
|
0
-   Share

Small, discreet, token — no pun intended — investments are certainly possible, but I can’t see and certainly don’t recommend much beyond that.

It shouldn’t be lost on anybody that one of the reasons for the diversification is long-term declines in the alcoholic beverage industry, due (to some extent) to efforts to recriminalize, or at least delegitmitize it.

Braintrust
"If other consumer brands are not already investigating and/or investing in this space, it is going to happen soon and in a very big way."

"This is a great investment, but certainly comes with image risks. Even if they just Market CBD oil with no THC, consumers will derive benefits."

"More than half of the states will have legalized recreational use of pot in five years, but I doubt it will be the law of the land until around 2027."