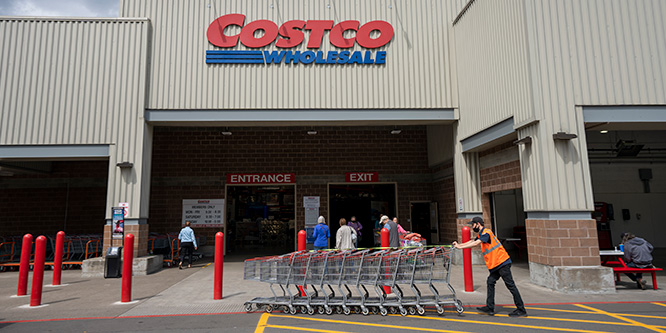 Costco continued to add new members to its clubs in its first fiscal quarter of 2022, while holding on to the vast majority of existing customers. All that adds up to another quarter in which the warehouse club’s sales and profits were up significantly — exactly what stakeholders have come to expect.

The retailer posted a net sales increase of 16.7 percent, with same-club revenues up 9.9 percent in the U.S. and 8.3 percent in Canada. Costco’s e-commerce sales were up 13.3 percent for the quarter ending Nov. 21.

Costco grew its total club membership to 113.1 million, up from 111.6 million in the previous quarter. The number of its executive members, its highest tier, was up 836,000 from the quarter before.

CFO Richard Galanti rattled off a list of supply chain and inflationary issues that Costco faces on yesterday’s earnings call with analysts.

“Overall, we feel we’ve dealt pretty well with the supply chain challenges in terms of delayed container arrivals on the Pacific Coast,” he said. “About 79 percent of our import containers are late by an average of 51 days.”

He said that the effects are being felt across the store and Costco has engaged in forward buying in some instances to stay ahead of the various factors disrupting supplies.

Mr. Galanti said that some toys and holiday items may not be in clubs in time for Christmas, but that the retailer has “mitigated that as best as possible, and feel pretty good about it.”

He said that Costco, in general, feels good about its in-stock positions.

“Our senior merchant the other day had indicated in his view that his feeling is that we’re better and stocked than anybody out there. And I think part of that is the fact of limited selection, that we are an item business, we could put something else in place or something. But we’ve done a pretty good job,” he said.

Mr. Galanti said he got “a chuckle” recently when a reporter asked him about a cream cheese shortage around the U.S. He said that bagel shops “are being challenged” in finding cream cheese. “It took a little extra work, but we’ve got all the cream cheese we need,” he said. “So I think we’ve done a good job in merchandising.”

DISCUSSION QUESTIONS: Where do you see the greatest opportunities for Costco to further grow its business in the U.S.? What are its challenges?

Please practice The RetailWire Golden Rule when submitting your comments.
Braintrust
"I believe Costco’s biggest growth opportunities and maybe largest margin is in prepared food ready to heat and eat. "

Costco has a lot of benefits in the current market. Foremost among them is its ability to help shoppers keep a lid on inflation by bulk buying. This isn’t for everyone – especially very low income shoppers who can’t always afford club membership and to buy in bulk – but it is useful for others and will help Costco enlarge its membership base. Availability is also important, especially for small businesses that use Costco. From our channel checks, Costco has been pretty solid on availability even as others have faced shortages.

I agree with Neil that Costco looks well-stocked, and its item-for-item flexibility gives it a competitive advantage right now. Executing its model well has paid off for Costco, but the company is still not taking full advantage of omnichannel opportunity compared to competitors like Walmart and Target. (And, needless to say, its pure e-commerce business is dwarfed by Amazon.) This may be a deliberate effort by Costco to “stick to its knitting” but it needs to be careful not to rest on its laurels.

This is the first time I have heard a report as specific as 79 percent of containers being late by an average of 51 days. That’s huge. That’s a lot of product not hitting the floor for pre-Christmas selling. And yet Costco says they are better stocked than anybody out there. Now I am more curious than ever about just how much product throughout retail will miss the all important pre-Christmas selling season. Value shoppers will be having a great time in January and February.

Costco is profitable because of its membership model and its merchandising strategy offers continuous delight to the customer as there is always newness. Selection is limited so there is a sense of urgency and frequent visits.

It’s a WINNING strategy and the store staff are NICE. Low staff turnover, low margins, low loss prevention — Costco doesn’t have any challenges that it can’t overcome. It’s a great retail model and serves everyone from small businesses to families.

Costco has limited its exposure to a large degree due to its business model of limited SKU offerings. Relatively speaking, they have a lower number of SKUs, but buy in huge quantities. This strategy has worked extremely well during COVID-19, mitigating a lot of pressure. Yet the CFO’s quote of “about 79% of our import containers are late by an average 51 days” is a scary statistic. Translate these same percentages to grocery retailers who carry 20,000 more SKUs than Costco at much lower volumes. It’s not hard to connect the dots and understand why some retailers are feeling extreme pain!

Costco has the advantage of limited selection and bulk buying, and the company can manage its products’ supply chains more easily than a retailer with a broad range of products. Costco can also eliminate products that cannot be managed efficiently or are not purchased at the level of demand Costco desires. Costco customers know that some products have a limited time on shelves in stores.

I believe Costco’s biggest growth opportunities and maybe largest margin is in prepared food ready to heat and eat. This is especially true for chicken related products since Costco has their own chicken production farm.

Costco’s challenge comes from only selling many items in large quantities which limits the number of potential buyers. This does not seem to have not affected Costco’s growth to date but may become a limiting factor in the future.

Costco’s success has everything to do with excellent management. They know their business and why it works. They enjoy the benefits of inflationary pressures. They, like Walmart and Amazon, are on top of the supply chain issues. They focus on what they do best and don’t try to be something else.

By the way, it is good to hear a “these are the facts” earnings call without all the CEO puffery that is the norm.

Our population demographic is changing, with smaller and childless families on the rise, as well as senior citizens aging at home. I realize Costco is a warehouse known for selling in bulk, but using that bulk buying power and breaking down a percentage of their cases into smaller quantities would allow them to keep their existing customer base plus add new customers who don’t have room to store a year’s worth of toilet paper. I see a lot of shoppers who would like to shop at Costco but just can’t deal with the large quantities, and thus miss out on the other great offerings like glasses, hearing aids or pharmacy.

All of the comments anticipate future positive results. However the most important has not been mentioned – VALUE – if other retailers follow their lead as well as those of TJX, Ross, Burlington, and Walmart, they will have a future as well. If not they will disappear as so many have. In retail you must listen to the customer and value is what she voted for, for the last 20 years. Of course there are exceptions i.e., Chanel, Gucci, etc.

Plenty of news in the recent results for CFO Galanti to be happy about. Considering north of 70 percent of operating income in the membership warehouse club channel continues to come from membership fees, that nearly 2 million quarterly growth in executive members (paying $120 annual membership compared to $60 gold star membership) might be the best news of all. Executive members not only pay 2X the regular Costco membership, but also represent the higher disposable income cohort that helps drives both the merchandise volume the model needs to optimize, and also materially contributes to that other 30 percent of operating income. One of Costco’s continued challenges moving forward is to keep these executive members (and all members) traveling to and shopping in the physical Costco locations where driving treasure hunt impulse buying — of higher margin merchandise — continues to be something Costco merchants excel at. That said, the news this week around Costco beefing up their “Costco Next” program (showcases an expanded online selection of curated items from some of Costco’s most trusted… Read more »
2
|
0
-   Share

I agree with Harley that prepared foods are primed for growth. Costco’s kitchen and deli operations plus on-site bakery give them the advantage of freshness and capacity. The same is true with their frozen and refrigerated sections, which carry mainstays to ethnic foods. They can add variety while maintaining low SKU count with greater rotation of seasonal and special meals.

Their home delivery model has upside. The economics of large orders cover fixed delivery costs, and should allow them to bring same-day delivery in-house rather than handing the relationship to Instacart with its upcharge.

I’m curious that “Unchanged” wasn’t a poll choice, since that would seem to be implicit in the headline. Or more on point: it’s the dominant player in a market that may be approaching saturation, so dramatic ups and downs are unlikely.

Braintrust
"I believe Costco’s biggest growth opportunities and maybe largest margin is in prepared food ready to heat and eat. "