Crate & Barrel store partners on the fly with local vendor 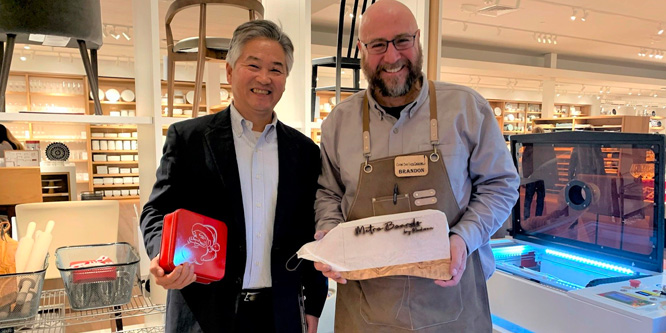 Over the holidays, a Crate & Barrel location in Michigan launched a partnership with a local laser engraving vendor the old-fashioned way.

Cutting Edge Lazer Engraving owner Nicole Smith visited the store on a regular shopping trip early in the holiday season, according to a press release about the partnership. During that visit, Ms. Smith struck up a conversation with the manager and mentioned the AP Lazer engraving technology used by her home-based business.

The manager invited Ms. Smith to set up a laser engraver in-store. Cutting Edge Lazer Engraving offered complementary in-store engraving on purchases throughout the holiday season. Crate & Barrel promoted the service and compensated the vendor, and there are accounts of customers being so touched that they teared up at seeing their gifts engraved. The store will continue to host engraving events in 2022 due to the popularity of the experience.

In-store bespoke customization of products has grown in popularity as new technology has come to market to make it feasible and more affordable. Boston-based retailer Ministry of Supply, for instance, implemented a 3-D knitting machine at its flagship store in 2017.

Beyond this single-store initiative, Crate & Barrel has been taking steps in general to provide more services to its customers. The chain in early 2020 opened its first design studio, which is focused on giving customers expert guidance on home decorating.

Crate & Barrel has also been pursuing partnerships on a much larger scale.

Recently it joined a number of major retailers in partnering with Pinterest, according to PC Magazine. The new initiative allows Pinterest users to virtually superimpose 3-D images of furniture they find on the app over rooms in their home to get a feel for how the furniture would look.

Nor is the retailer a stranger to experimentation through single-store pilots. In 2019, the retailer implemented a dine-in restaurant in a store location in the Chicago suburbs. The indoor/outdoor seating restaurant was launched in conjunction with Cornerstone Restaurant Group, which also worked with Michael Jordan on his branded steakhouses.

DISCUSSION QUESTIONS: What do you think of retailers doing ad hoc partnerships like Crate & Barrel’s in-store laser engraving partnership? Should store managers have the authority to broker these types of relationships at retail chains?

Please practice The RetailWire Golden Rule when submitting your comments.
Braintrust
"Ad hoc partnerships are low-risk and low-cost programs that can drive real benefits to both partners as long as they add real value to the shopper/the shopping experience."

"PLEASE, YES. I believe that retailers need to be locally independent to a point."

"I like this example because brands should always be looking for ways to collaborate to increase perceived and actual value for customers."

This is a stellar example of how national retailers can help a community thrive through supporting local businesses, and uniquely personalizing the store experience with products and services from within that community.

Ad hoc partnerships are low-risk and low-cost programs that can drive real benefits to both partners as long as they add real value to the shopper and/or the shopping experience. I am 100 percent all-in on these types of adjacent services inside the store. It’s another value-add that Amazon can’t touch, nor does it cost the shoppers $139 a year for the privilege. .

Many great ideas start at the single store level and expand. With clear guidelines and approval processes, retailers can drive grassroots innovation that provides pathways to scale AND protect brand and operations process adherence.

Retailers can give store managers the authority to broker individual store relationships if: they have hired the right managers, train the managers on their new authority, can monitor what those relationships are and how they are performing, and the business lends itself to such a model (like grocery stores buying fresh local bread daily).

Love this! Localize. Personalize. What an amazing way for a national chain to truly localize its business and offer a personalization service. I might not have thought of Crate & Barrel as a destination for giftable items, but this service completely changes that perspective. Hats off to Crate & Barrel and Ms. Smith!

I like this example because brands should always be looking for ways to collaborate to increase perceived and actual value for customers. This one touches on many dimensions (community, efficiency, win-win-win, etc.), but many other types of partnerships can be put together on the fly (out of convenience), or be implemented more deliberately. Look at the new store-within-a-store examples at Target. People buy things to solve problems. Most of the time, any one thing that is purchased solves only a part of the problem and the customer requires other products or services to solve the entire problem. Partnerships enable brands to be more proactive in solving complete customer problems – and the perceived value of that is much higher than the cost of the components.

I love when large retailers collaborate with local businesses. It is a win for the store, for the customers, and for the community.

We know that customers are constantly looking for more theater and fun while shopping. They are also drawn to personalized items that are different from the run of the mill. The Crate & Barrel initiative is ideal for delivering on both of these and will have a big impact on local shoppers making them more likely to return for future visits. However to allow all store managers to run riot and sign up local initiatives could be a very dangerous step and it is the retailer brand that is at risk if the quality is less than stellar. It would need some element of control, but this is good for manager and staff morale, enabling them to do more with their store, and improve customer satisfaction and sales. If done well it also adds to the brand value.

The national chains have many local managers that are creative and want to apply their creativity to their store. The example given is perfect. I believe local managers and employees should be encouraged to seek out logical local partnerships that enhance the business for both.

My fear is that they will be so successful that the national headquarters will get involved and turn these local unique partnerships into partnerships with other national providers.

Whether you’re a big retailer, one-off shop, local/chain coffee place or restaurant, there’s everything to gain by bringing in nearby talent to augment your business’ wares and services. Even if the procuring of such is handled by purely transactional rather genuinely integrating means, it’s always far better for operations to be a good neighbor over being an interloper. Meanwhile, though everyone from the card shop across the way to the pub down the block might already be doing a great job at collaborating with a nearby skilled hand-press operator and accomplished vocalist, large scale operations like C&B, have the actual power to make or break this very good idea. To break it would be for them to homogenize things, when it really only works as homegrown. Woe be to all of us if C&B suddenly partners with an entire industry (of engraving operations) instead of working with one person (or persons) whose individual entrepreneurship is as much the charm as their craft. Still, if the big guys were to take things national but keep it… Read more »
2
|
0
-   Share

Crate & Barrel, as well as its extension CB2, are a very innovative retailer from a merchandising as well as customer engagement standpoint. Predominantly at the store level is where the test/learn is evident. I think this is brilliant and speaks to how localization combined with personalization plus customer care comes together to truly delight customers. Love to see more of the same but this type of effort requires significant demand on resources which always gets in the way of success.

PLEASE, YES. I believe that retailers need to be locally independent to a point. The staff knows the community, lives in the area and has a much better feel for their clients/shoppers than corporate. Local partnerships not only support small businesses, but they build loyalty and authentically connect with the community at large. It adds store differentiation and creates a new reason to go to physical stores. I can see footwear chains partnering with local walking clubs, Starbucks partnering with local pottery shops for mugs–even hosting make your own mug evenings … etc. Let’s get innovative!

I love the level of authority that the store manager has and the ability to include local business. Most store managers would have replied with a, “I’m sorry we can’t do that” or maybe a “I’ll have to run it up the chain or flagpole” with a negative reply soon afterwards. The initiative and autonomy of the store managers at Crate & Barre speaks volumes about the chain and leadership structure — and all accretive. Large corporate partnerships aside, C &B gives its store leaders the ability to interact with the community — a recipe for success.

Braintrust
"Ad hoc partnerships are low-risk and low-cost programs that can drive real benefits to both partners as long as they add real value to the shopper/the shopping experience."

"PLEASE, YES. I believe that retailers need to be locally independent to a point."

"I like this example because brands should always be looking for ways to collaborate to increase perceived and actual value for customers."