Did anyone win the Stop & Shop strike? 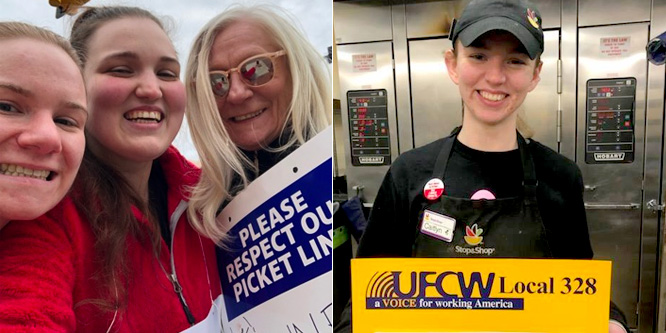 Representatives of the United Food and Commercial Workers (UFCW) union and management at Stop & Shop announced on Sunday that the parties had reached a tentative agreement on a new labor contract, putting to end an 11-day strike that saw 31,000 employees walk off the job at the chain’s 240 stores in Connecticut, Massachusetts and Rhode Island.

The strike had a serious effect on Stop & Shop’s revenues with The Boston Globe reporting customer visits dropping by 75 percent during the dispute.

Burt Flickinger, managing director of the Strategic Resource Group, told The Day that Stop & Shop lost somewhere between $25 million and $30 million during the strike and will need to spend up to $50 million in marketing to bring back customers who shopped at rival grocery stores over the 11 days.

Striking employees went without paychecks during the time they were on the picket line. A UFCW representative told The Day that workers received a $100-a-week strike benefit from the union.

“America’s middle class was built by organized labor. You’re sending a message that’s going to ripple out far beyond #NewEngland, that companies have to do right by their workers.”

Thank you to @PeteButtigieg and everyone standing with #StopAndShopWorkers! pic.twitter.com/IEf6nFDXcG

The UFCW claimed victory ahead of a vote to ratify the tentative agreement. The union said the strike of the chain, the first in over 20 years, was needed to fight back against proposed cuts in healthcare, take-home pay and other benefits.

“The agreement preserves health care and retirement benefits, provides wage increases, and maintains time-and-a-half pay on Sunday for current members,” according to a statement issued by the UFCW.

With associates back to work, the grocer and union said that job number one was getting shelves restocked.

DISCUSSION QUESTIONS: Do current models for employer/employee negotiations through collective or individual bargaining fit the needs of either party in the present-day labor market? Will any of the stakeholders — employer, employees, customers, vendors — in the Stop & Shop strike achieve a win from the labor action when all is said and done?

"I believe that we will see more of this labor turmoil going forward because it works."

"Management gets what they deserve. Great companies with great value, great culture, and open lines of communication will never have to worry about a union."

6 Comments on "Did anyone win the Stop & Shop strike?"

Stop & Shop happens to be my local go-to grocery store. Good assortments, good prices, good people. When the strike started I tried to discover the details of what the union was demanding and what the store was offering. No luck. I went to the store for items not available in the Whole Foods down the street. Picketing strikers stepped in my way as I approached the entrance. They asked for my support by shopping elsewhere. I explained the availability issue. They explained that they wanted to send a message to management. I pointed to the 95 percent empty parking lot and said, “I think they might have gotten your message.” Very similar encounter several days later. And I still had no details on the issues. I was in the United Steelworkers union many, many years ago. I support collective bargaining. I’ve also watched unions over negotiate and create very unproductive situations. Tough to see the win here. Maybe I’ll feel differently if I ever learn the details of the negotiations.
4
|
0
-   Share

In a perfect world, there would be no need for unions and strikes. While the Stop & Stop strike was bad for Stop & Shop and its customers, it wasn’t great for employees (during the strike period). The employees went without pay for several days and the $100 a week strike benefit from the union was a drop in the bucket compared to what they gave up. From a long-term perspective, the employees won, as they got the better pay and benefits they deserve, a living wage is an anomaly in retail today. It is good the strike didn’t go on much longer, as Stop & Shop was at risk of losing the loyalty of many customers. They probably lost some, but it could have been much worse. For the most part customers honored the picket lines and perishables were non existent in the store visit I did yesterday as part of a TV interview we did yesterday in Boston. I believe that we will see more of this labor turmoil going forward because it… Read more »
3
|
0
-   Share

As long as we have a management vs. worker mentality in American business, labor strikes and contract negotiations are a necessary evil. Why would any employee-minded company even consider cutting healthcare and retirement benefits? How can a company thrive in an environment where they don’t pay a robust wage and don’t pay time and a half on weekends? These concepts have been dropped years ago by modern companies who recognize that their companies thrive when employees are happy and when they offer competing wage and benefits in a modern, employee-centric environment. The employees clearly won here, but at what cost? Most importantly why was Stop & Shop embracing archaic business models that did not promote and reward an employee-centric environment where there workers thrived and felt like they were duly rewarded?

Management gets what they deserve. Great companies with great value, great culture, and open lines of communication will never have to worry about a union. Companies that lack these basic behaviors will have to deal with the consequences. Did a strike have to take place at Stop & Shop? No but both sides need to listen and realize that one is not successful without the other.

P.S.: I noted one thing in the agreement. It covers existing employees but does not give all the same rights to new employees.

Not covering new employees in the same way as existing employees is not that unusual in labor agreements.

While collective bargaining can still work, there is a reason that labor unions have dropped dramatically in size and membership. Employees who have dropped out of union membership do so because the value created by the union is less than the cost of union dues. In today’s workplace, there are so many issues that employees want to deal with, it is very difficult for a union to negotiate on behalf of all the employee demands. For example, employees are looking for more choices in healthcare and other benefits. In the case of Stop & Shop, It sounds like the agreement has solved the labor problems put on the table. It remains to be seen whether Stop & Shop can move on easily after the struggle of the strike. It also remains to be seen whether Stop & Shop will be tightening up the number of jobs to deal with the higher wages from the settlement. Both the company and the employees should focus quickly on delivering the products and services that draw consumers to Stop… Read more »
1
|
0
-   Share

"I believe that we will see more of this labor turmoil going forward because it works."

"Management gets what they deserve. Great companies with great value, great culture, and open lines of communication will never have to worry about a union."