Did holiday promotions drive gains or only pain? 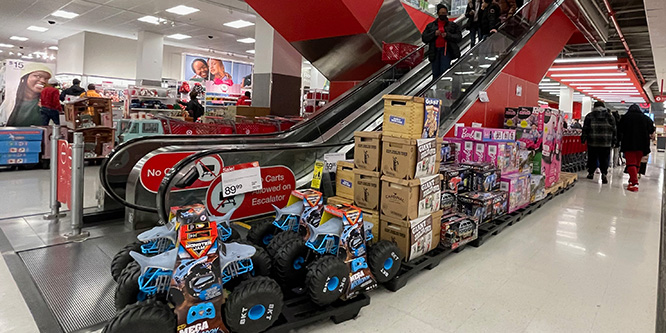 Mastercard SpendingPulse measures in-store and online payments and is unadjusted for inflation.

The 2021 holiday season benefited from pent-up demand, pandemic-supported savings, and concerns over inventory shortages. This year, sales were expected to be supported by a healthy job market and rising wages, but decades-high inflation and the threat of a recession were seen weighing on shoppers’ minds.

Promotions were also being closely watched as Amazon, Walmart and others aggressively discounted early in the season to rebalance ballooning inventories that were partly due to overbuying before supply chain pressures began to ease, as well as in response to softer consumer spending. Unknown is to what degree the promotions will affect retail earnings that will start being reported n February.

“Retailers discounted heavily but consumers diversified their holiday spending to accommodate rising prices and an appetite for experiences and festive gatherings post-pandemic,” said Steve Sadove, senior advisor for Mastercard and Saks’ former CEO, in a statement.

Channel checks by Wells Fargo indicated that Black Friday traffic had decelerated to the typical seasonal lull, dashing hopes by some that a late surge would arrive this year as cautious holiday shoppers hunted for last-minute deals.

Wells Fargo’s analyst Ike Boruchow wrote in a note last week, according to Seeking Alpha, “The key issue we see today is that a potentially weak holiday will lead to much greater investor caution entering 2023 due to elevated 4Q EPS risk, a very challenging 1Q setup looming (compares don’t ease until 2Q/3Q) and the fact that companies will likely take a more conservative approach to initial guidance.”

DISCUSSION QUESTIONS: What’s your feeling on how the 2022 holiday selling season went for U.S. retail? What was unusual about navigating this year’s holiday period, and does the performance bode well for 2023’s start?

Please practice The RetailWire Golden Rule when submitting your comments.
Braintrust
"I would caution anyone expecting a ticker tape parade celebrating the 2022 sales increase over 2021. This apparent surge resembles a wave crashing against the breakwater."

"This is a sales number trap. We need to understand that we won’t have any true idea of what sales were until the end of next month — not a few days after Christmas."

"When will we stop cheering about retail sales numbers in an inflationary environment?"

17 Comments on "Did holiday promotions drive gains or only pain?"

7.6 percent sounds like a healthy increase (up against a healthy 2021) but there are a couple of caveats. First, there is a lot of sales volume left to be done after December 25th so retailers’ Q4 reports will really tell the tale. And, second, it’s important to use 2019 sales as a benchmark to gauge recovery from the pandemic.

Overall, the predictions that retail sales would fall off a cliff in 2022 were very premature. The real key is whether inventory levels came down, and at what cost to retailers’ gross margins.

My guess is that we will hear about a lot more pain than gain for the season. Inflation adjusted sales down. Gross margins hammered. Credit card debt up. BNPL up uncomfortably. Which all adds up to a tightening retail environment through at least Q1 and Q2. I’d love to be wrong about this, but I think we are in for a tough first half of 2023.

Jeff, I agree on all points here but I have heard that we won’t see clearer waters until at least fall from some of my financial contacts.

Jeff, your analysis is right on point. It will only get worse when we see the bottom lines. This season has been a disaster for retailers.

Any time you are in the plus sales category is a good year, and 7.6 percent is good news. Despite the challenges, the holiday season of 2022 showed that consumers are still willing to spend during the most wonderful time of the year. Returns are what I’m focused on, with the prediction being 18-19 percent. The real question is, can retailers convert those returns to sales and keep the 7.6 percent increase?

Restaurant sales were up 15 percent, which is an impressive number. We are in a weird economic time for retail where inflation is high and jobs are plentiful. It will also be interesting to see how those Christmas checks will be spent. Everyone loves a discount. Will shoppers wait until the deep discounting season or rush online or to the shops already? I’m not sure Nostradamus could predict this or the rest of 2023!

Ken, a 7.6 percent gain against the current inflation rate is hardly good news.

There are several retailers that are struggling to survive coming out of their pandemic booms. For all we will hear about pains due to the heavy discounting, for some those will eventually lead to gains following expected filings. There will be some market share up for grabs, especially with tax time and the back-to-school season. That needs to be the focus for retailers seeking to offset these challenges.

I would caution anyone expecting a ticker tape parade celebrating the 2022 sales increase over 2021.

This apparent surge resembles a wave crashing against the breakwater. The sea wall often blocks the natural flow of sand down the coast and multiplies the force of waves onto the nearby shoreline — accelerating erosion elsewhere.

I’m anticipating retailers may need to endure significant erosion in the aftermath of holiday spending and throughout the coming year.

This is a sales number trap. We need to understand that we won’t have any true idea of what sales were until the end of next month — not a few days after Christmas. Also, holiday travel and many shopping days were offset by the massive storm which is still gripping the nation in its claws. Again, patience is necessary and given another 30 days, we will then be able to determine the sales promotion’s success.

There are some other traps in here. It’s a victory if retailers were able to flush the excess inventory out of their stores. That, too, remains to be seen. A top line sales number tells you nothing about ending inventory, unit sales and, of course, margin.

I agree. A top-line sales number in this environment tells you nothing.

When will we stop cheering about retail sales numbers in an inflationary environment? Would that be good if inflation was 10 percent and retail sales were 9 percent? I bet we would be cheering from the rooftops anyway.

When all the real numbers are counted and reported, the conclusion will be that it was one of the worst retail seasons in recent years. But don’t worry. It’s OK. Retail sales were up 7.6 percent.

Gene, I’m not sure I agree with your assessment. If the sales increase was roughly equal to the year-over-year inflation rate, it suggests that retailers sold the same number of units as a year ago. Not great, but not a disaster, either — but until retailers report the details of those sales (which categories, and at what cost to clear inventory?) I think the jury is out. In any case, there is at least mixed evidence that consumers were spending despite soaring prices of food and some other categories — whereas some earlier forecasts suggested that sales would fall off a cliff.

Overall, holiday sales growth looks solid. However dig under the headlines and it’s clear that a lot has been driven by groceries and by inflation. Remove those and volumes are negative across a lot of categories. That, along with promotions, will exert a lot of pressure on margins and profitability. We will see some soft Q4 results come the New Year.

Despite all the nuances, we saw record sales growth in 2021 and decent sales growth in 2022 YTD — with a few more days to go. More than anything, this year’s returns will define the season’s success. Many challenges at end of year, despite an extra week to sell, Xmas falling on a Sunday, cold blasts and storms, plus continued challenges with inflation, supply chain, war, Covid, and politics. I’d say +7.6% looks rather refreshing. Actually, promotions seemed to be a bit muted this year.

Just a reminder, 2021 retail sales blew past 13.5% growth from the previous year, and on a longer time scale, we continue to see the highest ever retail sales. For Walmart inventory rose ~12,4% in Q2. Excess inventory might not be all bad after years with stock-outs. An interesting view on this is here.

The main concern going forward should be price stability; without that, sales-growth figures are meaningless.

There is way too much focus on top line numbers, and way too little on a segmented understanding of categories breakdown, how much is unit vs price level growth, and how the brands selling in to retailers are pricing for margin vs volume, etc. Also on split of margin between retailers and brands / manufacturers. As others mentioned, the sales may have been front-loaded this year over the holidays, and the post Dec 25 numbers may be cannibalized as a result. There is simply not enough information yet to draw solid conclusions, and even if there was I suspect there would be numerous “tales of two cities” with some names and categories doing okay, and others not so much. The one thing that seems to be clear: private label is taking share in grocery and beyond.

Braintrust
"I would caution anyone expecting a ticker tape parade celebrating the 2022 sales increase over 2021. This apparent surge resembles a wave crashing against the breakwater."

"This is a sales number trap. We need to understand that we won’t have any true idea of what sales were until the end of next month — not a few days after Christmas."

"When will we stop cheering about retail sales numbers in an inflationary environment?"